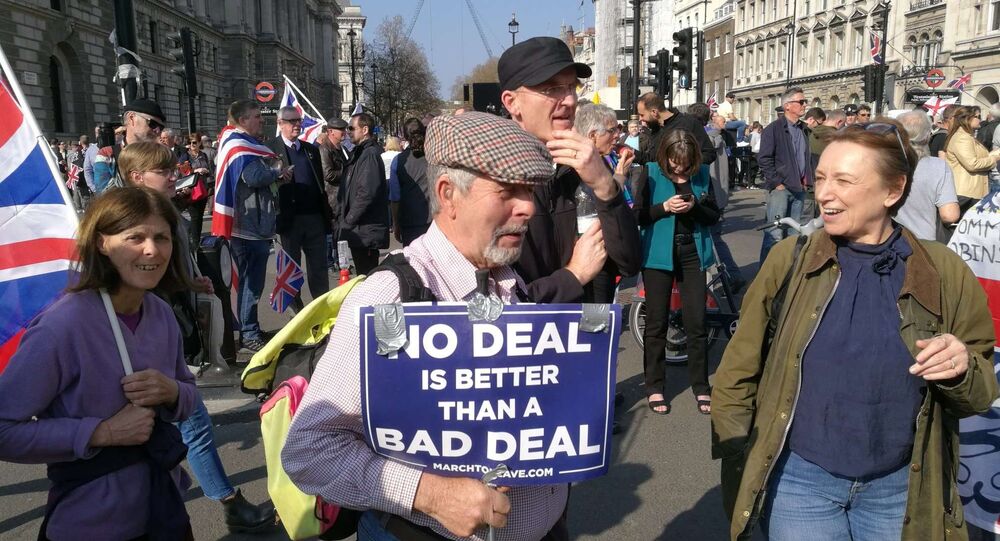 On 21 May, the UK Prime Minister presented the New Brexit Deal to parliamentarians. Ahead of Theresa May's speech in London, leading figures within the Conservative Party, such as Chancellor of the Exchequer Phillip Hammond claimed that leaving the EU without a formal deal would be an economic and political disaster.

But is this really the case? Sputnik spoke with Political commentator Mandy Boylett.

Sputnik: Would a no deal Brexit be as bad as many within British politics believe?

Mandy Boylett: Phillip Hammond is a remainer, he's always been a remainer, he knows that Theresa May's deal is essentially remaining because it is remaining in the customs union with no possible exit, apart from the backstop which is flawed.

So he's saying that we're better off remaining than leaving without a deal, he is of the opinion that no deal is bad for Britain, but I think the seventeen point four million Brexiteers who voted in the 2016 referendum don't share that view with him.

READ MORE: British Establishment Will Do Everything to Stop Brexit — UKIP Scotland Leader

Sputnik: Does Theresa May's deal have any chance of being approved in parliament?

Mandy Boylett: She's got absolutely no chance of getting the deal approved. She knows that her advisors know that, why they are going through this pantomime I have no idea. It's really bizarre.

© AP Photo / Matt Dunham
UK PM May on Brexit: You Need a Deal First Before Second Referendum (VIDEO)
We had the best chance of getting a deal right at the start, before the negotiations; if we'd started off saying we're going to WTO rules, is there anything we can negotiate on top of that to make things better for business? That should have always been the starting point.

Theresa May got it completely the wrong way round, so they should throw her deal away, it's no good. We can either go through the performance of trying to get another with the EU, but they would probably say that they will not open the withdrawal agreement again, and we wouldn't want them to open that again, we'd want them to do a completely different agreement.

I think the best way forward would be to say we're going to go for no deal, we're going to leave under WTO rules, and then we'll negotiate everything from that point, which is what we should have done in the first place.

Mandy Boylett: The Brexit Party is going to win the European elections, and the Lib Dems are going to come second, and the voters are re-aligning themselves whether they are Brexiteers or remainers.

© REUTERS / Vincent Kessler
Nigel Farage’s Brexit Party Would Hammer Tories in General Election - New Poll
If the Tories want to avoid complete annihilation; they have to become the party that the Brexit Party is, but I completely understand Nigel Farage not wishing to have an alliance with politicians who voted for Theresa May's deal, but ultimately I think there will have to be an alliance.

My hope is that there would be an alliance between the Brexit Party and the Tories, just to keep Corbyn out; because the thought of having an anti-Semitic Marxist in Number Ten, fills me with fear.

Views and opinions, expressed in the article are those of Mandy Boylett and do not necessarily reflect those of Sputnik.