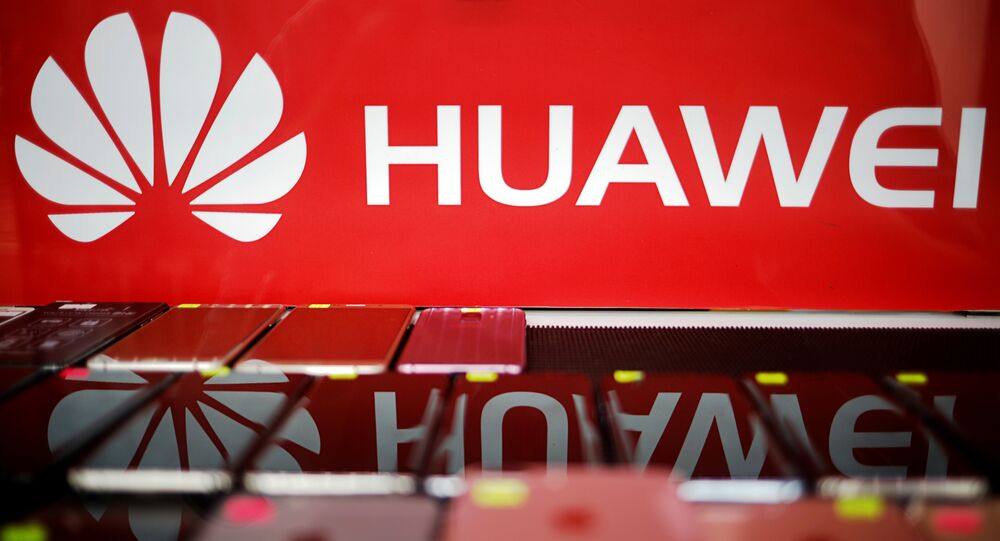 President Donald Trump's desire to help American companies may have unpleasant consequences for them. The US Commerce Department officially added China’s Huawei to its so-called Entity List, blacklisting the Chinese telecoms giant for national security reasons.

Now, any American firm supplying Huawei with components will have to obtain US government approval and a license.

Last year, the Trump administration banned government agencies from using the equipment of several Chinese manufacturers, including Huawei, under the pretext of it being a national security threat. Moreover, the United States banned Huawei from participating in the creation of a 5G network across the country. The United States has called on the rest of the world to follow it, but apart from Australia, even the US' closest allies are not willing to give up the Chinese company's equipment  — its share in the global telecommunications market is just too large.

© REUTERS / Dado Ruvic/Illustration
UK to Announce Decision on Huawei 5G After Trump's Visit to Avoid Conflict – Report
Now, amid the escalating trade dispute between the two countries, Donald Trump has declared a state of emergency to ban the sale and use of telecom equipment that poses risks to American national security and communications infrastructure. This decree does not name any specific companies. However, it gives authority to the US commerce secretary after consulting with heads of other federal agencies, including the State Department, Treasury, the Pentagon, and the Director of National Intelligence to impose a ban on some commercial deals with information and communication technologies and services.

Shortly after, the Department of Commerce decided to blacklist Huawei for activities threatening the national security of the United States. Together with Huawei, around another 70 affiliates will be blacklisted. American manufacturers who sell Huawei parts will now need a special license from US authorities.

In fact, similar measures were taken at one point against another Chinese company — ZTE. At the time, the ban on US companies from selling their components to ZTE nearly ended in bankruptcy for the Chinese firm. Huawei is not as heavily dependent on imported components. But at the same time, this has already complicated the company's business, whose smartphones use the Android operating system from Google, after the US tech giant announced on Sunday that it was suspending some of its business operations with Huawei.

© AFP 2021 / Tolga Akmen
Huawei Had Plan B for European Users Year Before US Blacklisting – Reports
The Chinese electronics company also uses chips from American manufacturers for its products and  chipmakers like Intel, Qualcomm, and Broadcom have also announced that they won't be selling parts to Huawei until further notice. But for these companies to comply with Trump's order means that they will feel the losses.

According to Huawei, the company last year bought $70 billion worth of foreign components from 13,000 suppliers — US supplies accounted for $11 billion of that.

Adam Segal, director of digital and cybersecurity at the Council on Foreign Relations, told CNBC that Beijing could retaliate against American manufacturers operating in China. Moreover, the most innocent measure would be to boycott American products, something that has been repeatedly done by China in relation to manufacturers from other countries. However, Chinese authorities may also complicate administrative procedures for US businesses. The most vulnerable in this situation is Apple, which produces almost all of its products in China.

© REUTERS / Dado Ruvic
Huawei Founder: US 'Underestimates' Company, 5G Plans Not Affected - Reports
Donald Trump has repeatedly urged the company to move production to the US. However, the entire production chain of iPhones is concentrated in China. The OLED-display, the face scanner, the camera — all of these components are made in China, reducing the cost of the final product. And the tax breaks for Apple, which Trump has promised, won't be able to cover the additional costs that would arise if production is transferred.

So the Trump administration's aim to protect their companies from Chinese competitors can, on the contrary, do them a disservice, says Gong Hongle, an expert from the School of Foreign Studies at Nanjing University.

"The United States produces mainly high-tech products, they are at the upper level of the supply chain, and China is still at the lower level, its position compared to the US is weaker. But there are a lot of people in the global production chain, so from the US point of view, limiting Huawei is the same as to sacrifice 800 of your own soldiers for the sake of victory over 1,000 enemy soldiers. And if China decides to introduce retaliatory measures against American companies, then it is the same as sacrificing 1,200-1,500 of your men over 1,000 — of the enemy, figuratively speaking. So from the point of view of the price of this measure — it is completely unprofitable. If serious measures are taken against Apple, Chinese production itself will suffer from this", the scholar explained.

"Secondly, the Chinese government, which adheres to the principles of globalisation, has the full moral right to criticise the actions of the United States on the international arena. So when the United States increased tariff duties, China filed a complaint with the WTO. The complaint said that unilateral protectionist actions by the United States pose a great threat to the principles of international trade. If China decides to carry the banner of world globalisation, considers the promotion of globalisation ideas as its mission, assumes this responsibility, then it can't use the same methods as the US. Therefore, in general, it can be said that the likelihood of China's retaliation towards US companies, especially those with a large share in the production chain, is extremely low", Gong Hongle said.

© REUTERS / Aly Song
US Commerce Department Lifts Restrictions on Huawei - Report
But even if no response from Beijing follows, it is still not known whether the ban on the largest telecommunications manufacturer in the world will benefit American consumers. As Huawei said in a statement, commenting on the move against it by the US Department of Commerce: "If the US restricts Huawei, it will not make the US safer, nor will it make the US stronger. It will only force the US to use inferior and expensive alternative equipment". It will leave the US lagging behind when it comes to 5G compared to the rest of the world.