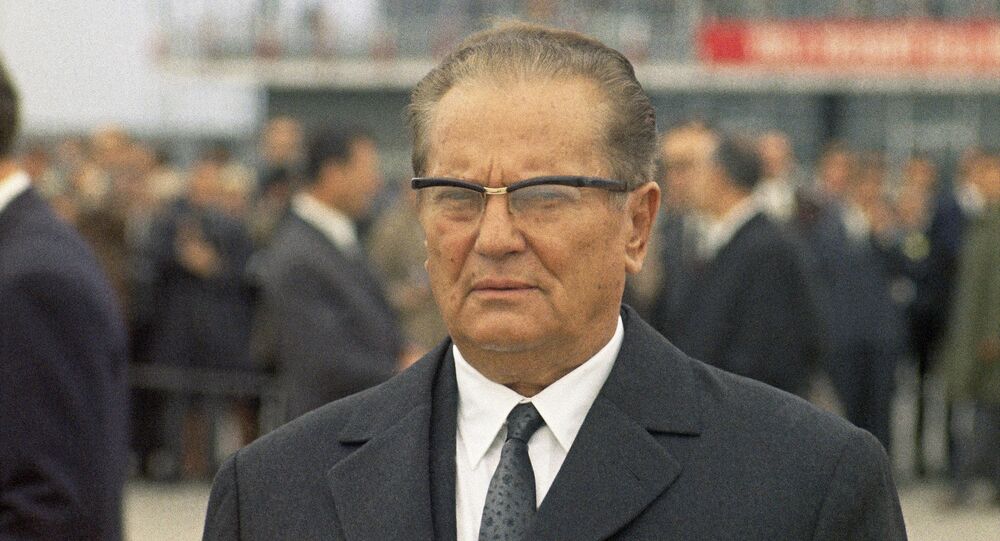 Masa Radovic - Zlatica Broz, the granddaughter of former Yugoslav President Josip Broz Tito, spoke to Sputnik about her grandfather, describing him as gentle and attentive.

She also addressed the stories that are spread about him in the press and books, Tito's relationship with the Soviet leadership, and his unique ability to keep the seemingly unresolvable problems of the Balkans under control.

Sputnik: What kind of grandfather was Tito? Gentle or strict?

© Photo : Twitter, PrimeministerGR
EXCLUSIVE: Political Games & Gains Amid Macedonia Name Discord
Zlatica Broz: He was not strict, but we respected him; so we, in order to please him, and to make sure he would be happy with us, and not to worry him, would listen to him, and thought about our behaviour. He gave us the freedom to choose. He could give some advice when he considered it necessary. But he wanted us to become independent, to have our own opinions and to fulfil our own desires. He only gave us direction.

He was very gentle, although he did not have much time for us. When we started school, we had even less time to see him. But our meetings with him, the time that we spent together, we spent very "qualitatively". When we were together, he really spent time with us: talked to us, played. These meetings are my most cherished memories.

Sputnik: You and your brother Јоska (Јosip) Broz are known for your modesty. Do relatives of today's politicians have this quality?

Zlatica Broz: Well, first of all, I must tell you that I personally don't know these people. But from what I hear or see in the media, I can say that they live a completely different life: they have more privileges and material possibilities. Today, it seems to me, politicians and their families are perceived completely differently; the material side of life today has become exceptionally significant.

READ MORE: Secret CIA Docs: Yugoslavia Had Uranium to Build Nuke by 1980, Had Help From US

There is a big difference between the children of current politicians and us.

Sputnik: What newspaper stories about your grandfather hurt you the most? Recently, a lot has been written about Tito's origin, for example…

Zlatica Broz: So many terrible things were written, so many insinuations, lies, speculations… Some say that we don't have freedom of speech or freedom of the press. In fact, people can write pretty much anything and in any way, not taking into account that this may offend someone or could be a lie.

So many nasty things were written about him. But I never followed it, I didn't read those books.

© AP Photo / Alik Keplicz
NATO Military Drills in Croatia: ‘Real Countries’ Took Kosovo to Play War
Although yes, Јosip (brother of Zlatica and grandson of Tito) and I sued Todorovic (Marko Todorovic, author of a book about Josip Broz Tito titled "The Pretender" — "Hohštapler"). Our lawyer found more than a thousand facts that were lies in the book. Listen, you can't write a historical book with points like "they signed somewhere", "you could hear", "it was everywhere" and so on. These are not historical facts, not historical data. But we got nothing from it. Back then and now, there was a tendency to minimise the significance of Tito, to blacken his image. In my opinion, this is rude and uncivilised.

Sputnik: Do you think Tito could have solved today's conflict in the Balkans?

© REUTERS / Dado Ruvic
Exclusive: Bosnia and Herzegovina's Joint Presidency Chairman Milorad Dodik on UK's ‘Malign’ Influence in Balkans
Zlatica Broz: Well, what should I say? When he was in power, he somehow managed it. There were problems, but they were somehow kept under control. And the peoples of former Yugoslavia really lived in peace, fraternity and unity, no matter how ironic people are about it today. So I believe that he could've continued, as they say, to take matters into his own hands so that the country would develop.

As for Kosovo — Kosovo was with him; during his time, the situation wasn't so tense there. I think that even now he would have found an opportunity to somehow defuse the situation.

Sputnik: How did Tito feel about Russia? He spent part of his youth in Omsk…

Zlatica Broz: He loved Russia. And respected it. He spent several years there. Grandmother Pelageya was Russian. (Pelageya Belousova was Tito's first wife. They got married in Omsk and had four children, only one son, Žarko, survived —  Sputnik).

© REUTERS / Marko Djurica
Serbian Defence Minister, Ruling Party Start Hunger Strike to Resist Opposition
In 1948 (during the Tito-Stalin split, when Stalin accused Tito of anti-Soviet policies — Sputnik), grandmother once said that she was ashamed of her being Russian, when she heard the message from the Communist Party's information bureau (Kominformburo). But he got a little angry and said that he never again wanted to hear such things, because people are one thing, and authorities are another. He separated these two categories. He loved Russians.

He was a man who just wanted peace in the world, peaceful coexistence of people. And for us, he was a beloved grandfather who gave us so much love and devoted as much of his time as he could to us. During 31 years of my life, while he was with us, he was present in it and was a very important person to me.

Kosovo War at 20: How Britain and America Backed Jihadists Throughout Conflict