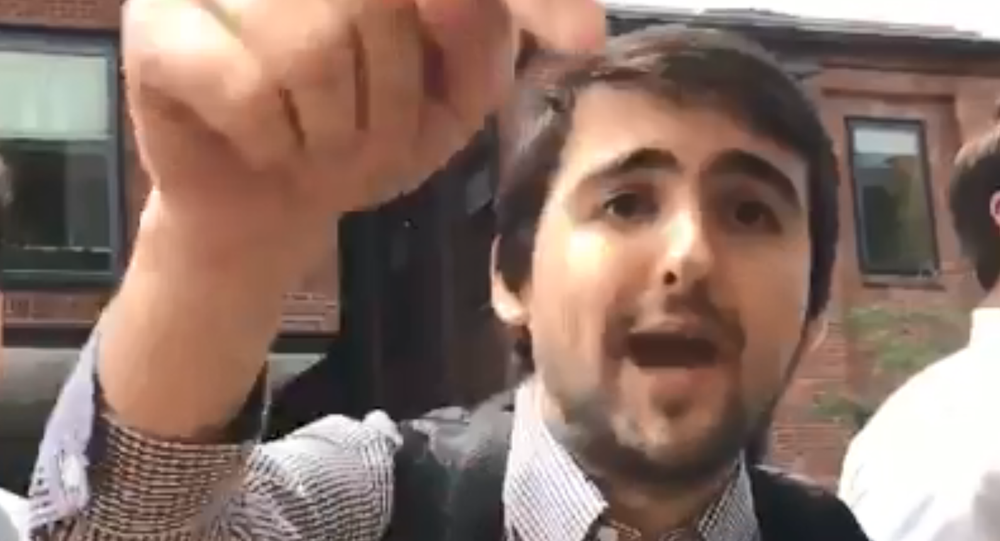 The angry mob of Venezuelan expatriates who laid siege to the Venezuelan Embassy in Washington, DC, earlier this month was composed of numerous figures with close ties to the inner structures of the US empire and who stood to benefit financially from a coup d’etat in Venezuela, investigative journalists told Sputnik Friday.

During the nearly three-week-long siege of the Embassy Protection Collective by opposition forces, numerous instances of harassment and violence were documented, including bigoted comments and slurs, physical struggles and the use of tools such as scuba lights, laser pointers and air horns to harass and intimidate the anti-war activists.

As journalists began to look into they footage, they also began to wonder: who are these people that form the Venezuelan opposition?

​The struggle at the embassy, in Washington, DC's historic Georgetown district, was essentially an extension of the struggle inside Venezuela. Since January 23, Juan Guaido has presumed to be Venezuela's interim president — an office he's recognized as occupying by the US and about 50 other nations, but which has no meaning on the ground in Caracas, where Guaido commands relatively few followers. Even internationally, three-quarters of the globe's countries, as well as key international institutions like the United Nations and International Monetary Fund, continue to recognize Venezuelan President Nicolas Maduro, who was re-elected to a second term in May 2018.

Jeb Sprague, a lecturer at the University of Virginia and author of the forthcoming book "Globalizing the Caribbean: Political Economy Social Change and the Transnational Capitalist Class," teamed up with journalist Alexander Rubinstein of MintPress News, who was embedded with the Embassy Protection Collective inside the embassy for nearly a month, including during the two-week period of the siege, from April 30 to May 13, to probe the internet for the identities of the people in the footage.

Their report, titled "Who's Behind the Pro-Guaidó Crowd Besieging Venezuela's DC Embassy?" was published on Thursday, just hours before US police stormed the facility and arrested the activists. Sprague spoke about their findings Friday with Radio Sputnik's By Any Means Necessary.

Here is Nica Lenin, the guy who shouted slews of racist slurs at embassy protectors yesterday. Read about it here https://t.co/BvHL2f0SWq pic.twitter.com/tOusW38gWV

​The Embassy Protection Collective was formed on April 10 by anti-war activists in the United States who objected to Washington's coup attempt in Venezuela and who saw the imminent delivery of the empty embassy to Guaido's retinue as a major provocation that could lead to war. With the Maduro government's permission and armed with international treaties recognizing the embassy's legally inviolable status, the activists set up shop in the facility, where they soon came under attack by pro-Guaido protesters seeking to either storm the embassy or starve the collective out.

My experience so far with Venezuelan opposition has been abuse and hate. This guy and his friends just started calling me a “fucking bitch.” I was just standing with other journalists watching the protest. You’ll never get people on your side talking like that. pic.twitter.com/QhG9sXkVfN

© AP Photo / Andrew Harnik
US Police Allow Venezuelan Opposition to ‘Lay Siege’ to DC Embassy, Activists Inside
​"In the beginning of their siege, their first week or two, they were really, extremely homophobic, racist — I mean, you don't have to take my word for it, you can look on Twitter and in our article and all the links to all, you know, they are just videotaped, time after time, yelling out all this stuff," Sprague said.

"But then what we found is they have these sort of like, PR/marketing strategists, people that came in after that initial period and they really tried to alter how people were perceiving that mob… and so you had media outlets like the New York Times, Vice Magazine… they came in. So, when they would come to the siege, there were these people who were put up by the mob for them to be interviewed."

Wear all the rainbow flags you like, but I've still been called a f*ggot and a sissy more times by the Opposition in the last week than I have in the previous two years, at least. https://t.co/AIe1gVHgAE

​Sprague said one woman who became a "poster child for the pro-Guaido mob," Dilianna C. Bustillos, "she's actually a senior manager at Oracle, which is one of the largest companies in the world, a tech company that works with defense companies and makes like a $40 billion a year annual revenue… she's a senior manager there. She previously volunteered with Visión Democrática, which is a pro-opposition group which is connected with a lot of the people who are working with Juan Guaido in DC."

He noted many of the figures they identified were connected to a series of meetings at the Center for Strategic and International Studies (CSIS), a hawkish US think tank in Washington, DC, where pro-Guaido figures and shadow government officials helped plan a US invasion of Venezuela.

© REUTERS / CARLOS BARRIA
‘This Puts Us in Great Jeopardy’: US Stops Venezuelan Embassy Raid Over Concerns of Consulate Safety Abroad
​"They've started this website called ‘Ask a Venezuelan,' and so, constantly on Twitter there's like this mantra… they're saying ‘ask a real Venezuelan,' ‘ask a Venezuelan.' And so, we started a thing called ‘Ask an Upper-Class Venezuelan;' when we researched who they are — like the woman that founded that group, ‘Ask a Venezuelan,' she has a $4 million a year company, and she had put out tweets supporting the guarimbas, which were these really violent protests, called for the US Marines to land in Venezuela. So one after another," Sprague told hosts Eugene Puryear and Bob Schlehuber.

"And then we started looking at more of the people that were at the protests, and we found one guy who was a senior architect at Raytheon, the arms company. It was like, every time we looked at a person, their background in DC — two people that worked for CSIS, one that's been working for the World Bank, another one for the Inter-American Development Bank — that guy actually got caught yelling out a lot of racist, sexist epithets."

Loving school teacher, or just a big bully? @MarlonEcorrea has been intimidating, verbally abusing, and assaulting peace protectors since Tuesday. Don't you have papers to grade? #handsoffvenezuela #nobloodforoil pic.twitter.com/9C4d595gln

"One of the most interesting guys Cesar Caminero, we documented him as being there, and when I found his LinkedIn page, it said that he works for this tech company, and he does work for the [US Department of Defense], and he brags on his LinkedIn that he has this active secret clearance," Sprague said. "And there's this other guy who was doing tech work for US intelligence, so it was just fascinating that we could see just, one after another, people were either working with like, an international financial institution, an arms or military-oriented contractor or a hawkish think tank funded by the Gulf [monarchies] and big arms companies."

"We figured out there's this built-in base of these elite members, professional people in the diaspora, that basically advocate for regime change and escalation of conflict where they can really gain or benefit through US intervention," Sprague said.

Indeed, Guaido himself is an alumnus of The George Washington University, located in Washington, DC's Foggy Bottom neighborhood.

"Even if the embassy defenders got pushed out, I think it was still a victory in really illuminating the crimes of the Trump government and showing how violent these people are that they work with," Sprague said.