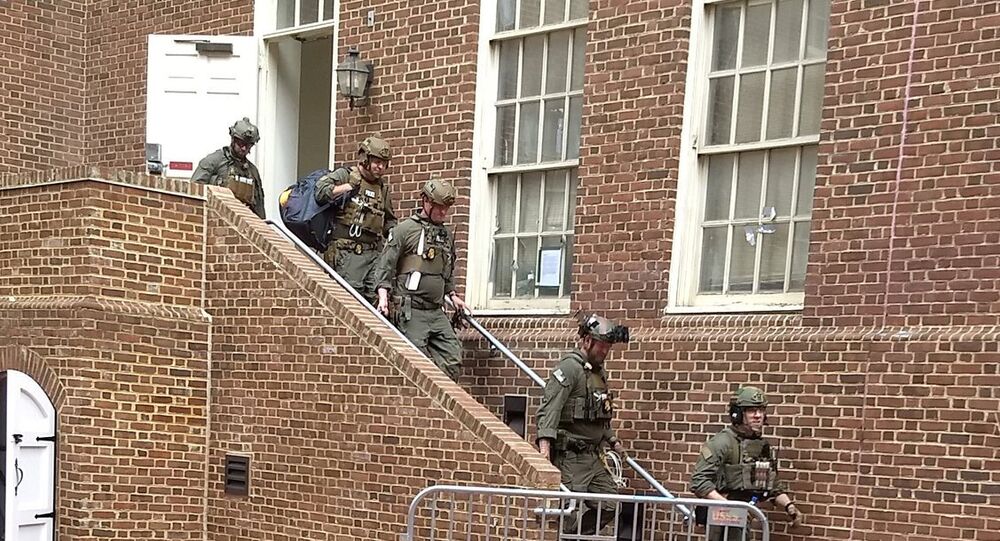 Thursday morning, US police stormed the Venezuelan Embassy in Washington, DC, and arrested the four remaining activists defending the facility from the opposition forces outside. However, an activist and member of the Embassy Protection Collective told Sputnik the movement in the US against the coup in Venezuela was far from over.

For 36 days, a collective of anti-war activists from groups including Code Pink, Act Now to Stop War and End Racism (ANSWER), Popular Resistance and the Black Alliance for Peace lived in the Venezuelan Embassy in Washington, DC's Georgetown district. The activists moved in on April 10 with the permission of the Venezuelan government in Caracas, which since January 23 had been locked in a fight for its life against a US-backed coup d'etat.

That coup, which attempted to replace Venezuelan President Nicolas Maduro with an unknown contender named Juan Guaido, eventually found its way back to Washington, DC, itself, with the pro-Guaido opposition attempting to seize the Maduro government embassy. The Embassy Protection Collective was formed to block this effort, acting as caretakers of the facility until a third power could be found to act as a neutral caretaker while the political struggle was resolved.

The last Venezuelan diplomats departed the country in late April, when their visas expired. They turned over the keys to Code Pink co-founder Medea Benjamin, who had also helped found the collective, laying the foundations as early as March 20, when it became clear the facility was being targeted by Guaido, Sputnik reported.

The struggle intensified when the pro-Guaido protesters were permitted by US police to lay siege to the building, blocking the entry and exit of people as well as supplies, and turning every day outside into a test of willpower, as pro-Guaido activists tried to hold off pro-collective protesters seeking to resupply their comrades inside.

The collective nearly ended on May 13, but US police backed off from a full-scale raid of the building when it was pointed out that entering the embassy would be a breach of the Vienna Convention of 1961, which renders embassies inviolable.

However, they weren't so forgiving on Thursday, and police in full body armor stormed the facility in the late morning, arresting the four protesters inside.

"This is an illegal order that they're following," activist Adrienne Pine can be heard telling @ArielElyseGold on her stream, before being hurried away in a Secret Service car together with @DrMFlowers: pic.twitter.com/zoRK7qPBGL

​"This is an illegal order that they're following," collective member Adrienne Pine shouted from the back of a police van as she and the other activists were wheeled away in handcuffs. They will be arraigned on Friday in a DC federal court.

The Partnership for Civil Justice Fund, which serves as the collective's legal counsel, tweeted Thursday a photo of the arrest warrant, noting the activists were charged with "interference with certain protective functions" and not trespassing — reflecting the US government's unwillingness to confront the fundamental question of who is legally in charge of the embassy property.

Here's the Arrest Warrant for #EmbassyProtectionCollective. Charge: Interference with certain protective functions.
Significantly, not a trespass charge. Showing US govt wants to avoid defending in court who's lawfully in charge of Embassy; EPC was invited in & lawfully present pic.twitter.com/hFChrUbhf4

​Radio Sputnik's Loud and Clear spoke with Kei Pritsker, an organizer with the ANSWER Coalition and a member of the Embassy Protection Collective who stayed in the embassy for weeks.

​Pritsker said the arrests were "a bit of a shock," since momentum had been building in recent days in favor of the collective — but not that much of a shock, since from the very beginning, the police had never acted favorably toward the collective or even impartially as mere enforcers of the law and keepers of the peace.

The day before, civil rights leader Jesse Jackson had come to the embassy. After a struggle, and with pro-collective protesters by his side, he broke the siege enough to get several bags of food, water and supplies inside the building. A rally that evening saw pro-collective protesters far outnumbered the opposition, which seemed to cement the turnaround from Monday's debacle in which a food delivery turned into an all-out brawl and the police turned back at the final moment from raiding the embassy.

"It's definitely sad" the four remaining collective members were arrested and the embassy seized, Pritsker said, "but also, the Embassy Protection Collective movement is not over. This is a huge violation."

Pritsker noted the police violated many of their responsibilities as well as international law outside the embassy.

"You bring up the Vienna Convention," Pritsker said to host Brian Becker. "It's the United States' duty to protect whoever the legitimate government is — regardless of circumstances, regardless of diplomatic ties with the country. The two countries could be at war, but the Secret Service is still sworn to protect the embassy and its property. But you know, we saw security cameras destroyed, we had multiple break-ins, we had sabotage of the water systems, electricity was cut off. So like with the rest of the coup, this whole thing has been an illegal operation, a complete disregard of US domestic law and also the Vienna Convention — international law."

"A lot of people that are in this movement are here because they know what happens in the United States, and they know what Juan Guaido is going to bring to Venezuela. It's the same neo-liberal, capitalist policies that are causing inequality, causing rising rents, causing a crisis of poverty and homelessness here in Washington, DC."

"So for any activist, someone fighting for social justice here in DC, to see all that's happening in Washington, DC, and then for Donald Trump to tell us that our enemy is not slumlords in DC but is actually the Venezuelan government and the Venezuelan people is ridiculous. The fact that he is sending so many resources to fight poor black and brown Venezuelans instead of serving the poor black and brown people of DC shows you exactly where his loyalties lie: they lie with US business interests in Venezuela."

© Sputnik
"President" Bolton Drives US Towards War With Iran, Venezuela

Sanctions are "economic war," Pritsker said, noting a recent report from the Center for Economic and Policy Research (CEPR) that US sanctions on Venezuela had caused the deaths of 40,000 Venezuelans in the last two years.

The activists told Sputnik that a protest outside the embassy scheduled for Saturday at noon will still go on as planned.