The latest US-Russian talks were the first highest-level summit between Russian and American officials since the Helsinki meeting of 16 July 2018. American and Australian scholars have shed light on the two nation’s differences, common interests, and the prospects for cooperation.

On 14 May, Russian President Vladimir Putin and Foreign Minister Sergei Lavrov held talks with US Secretary of State Mike Pompeo, discussing a wide range of security issues, including Syria, Venezuela and nuclear arms control agreements, during the first highest-level summit between Russian and American officials since the Helsinki summit on 16 July 2018.

"Today's meetings were a positive step forward", Pompeo tweeted on Tuesday. "The US and Russia have demonstrated in the past that we can cooperate on key international issues. We urge Russia to work with us to change the trajectory of the relationship for the benefit of both nations".

The Russiagate 'Show' Will Go On in US

However, according to Dr Gal Luft, co-director of the US-based Institute for the Analysis of Global Security (IAGS), the story of the alleged "collusion" between Moscow and the Trump campaign in 2016, which was eventually debunked by Special Counsel Robert Mueller's report, will continue to cast a shadow over US-Russian relations for quite a while.

"The Russiagate affair will not cease before the last day of the Trump administration", Luft opined. "This is not about Russia or about the elections. It is a coup attempt against a democratically elected president".

© Photo : Sarah Sanders/twitter
Observers on 'Political Hack Job' & Who Really 'Meddled' in US 2016 Elections
The scholar noted that Moscow and Washington should prepare themselves for the continuation of what he dubbed a "highly successful reality show", predicting that "from now on no American president can be elected without the defeated party blaming a foreign power for the result".

During a joint press conference, Lavrov pointed out that the parties had agreed to rebuild the channels of communication.

"Lately, these channels were frozen, largely due to a wake of baseless accusations against us in attempts to influence American elections and certain collusion of high-ranking officials of the incumbent administration, and it is clear that such insinuations are absolutely fake", the Russian foreign minister emphasised.

Between 17 May 2017 and 22 March 2019, Special Counsel Mueller conducted an investigation into the alleged Russian interference in the 2016 US presidential election and supposed collaboration between Trump's associates and Russian officials. While the report clearly rejected the "collusion" narrative, it insisted on Moscow's interference in America's internal affairs, something that the Russian leadership strongly denies.

Prospects of US Direct Intervention in Venezuela are Low

Although previously Pompeo demanded that Russia "must get out" of Venezuela, the secretary of state admitted the necessity of finding a way to end the ongoing political crisis despite US-Russia disagreements over the leadership in the country.

"On Venezuela there is stark disagreement which cannot be resolved, but I don't see the US intervening militarily", IAGS co-director Dr Luft noted. "Trump ran his campaign on aversion to costly foreign interventions. His electoral base, on which he is dependent for his re-election, will be furious if US troops get involved in an open ended civil war ahead of the 2020 elections". 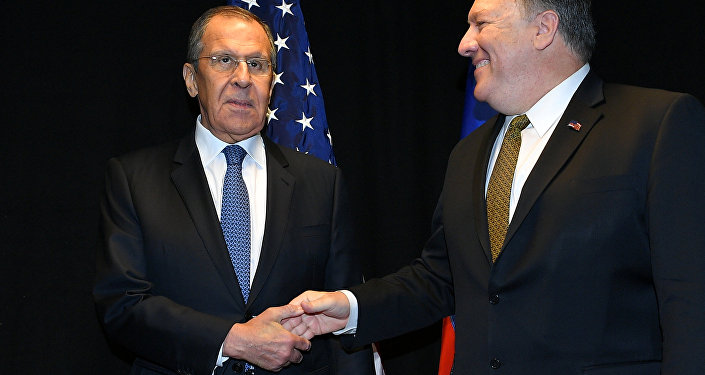 © REUTERS / Mandel Ngan/Pool
US Sec of State Pompeo and Russian FM Lavrov Hold Joint Presser in Sochi (VIDEO)
Still, he highlighted that Washington "can support the Venezuelan opposition in multiple other ways, political, financial, and through covert operations in order to change the status quo".

Paul Poast, assistant professor of political science at the University of Chicago, also believes that "the prospects for directly military intervention are low", while the US government's "diplomatic intervention" is "already significant and can have an effect on the situation in the country".

Having thrown its weight behind Venezuela's self-proclaimed interim-president Juan Guaido on 23 January 2019, Washington imposed sanctions against the legitimate government of Nicolas Maduro and provided financial aid the Venezuelan opposition, while at the same time calling upon the country's military to take Guaido's side.

Syria: 'The Only Bright Spot in US-Russian Relations'

"Syria is the only potential bright spot in US-Russia relations", Dr Luft believes. 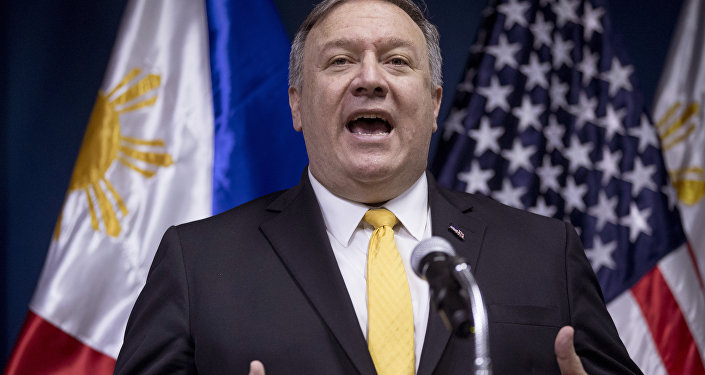 © AP Photo / Andrew Harnik, Pool
Pompeo Urges Moscow to Work With Washington to Change Path of Relationship
Following the meeting Pompeo told reporters that there is an opportunity to make progress on peace talks in Syria within the framework of UN Security Council Resolution 2254. The document, unanimously adopted on 18 December 2015, calls upon all warring parties to cease fire and open the doors to a peaceful settlement.

According to Luft, there are certain Syria issues where Russian and American interests overlap, especially when it comes to counter-terrorism efforts. He pointed out that Washington had "reluctantly accepted" that Syrian President Bashar al-Assad is still in power, adding that "Russia and US wish to see the conflict over and the beginning of national reconstruction".

The researcher expects "a much stronger US-Russia cooperation on Syria in the coming months".

In contrast to the US, who started a counter-terrorist campaign in Syria in 2014, Russia entered the region at the request of the legitimate Syrian government. Moscow's aerospace operation became a game changer, while the Moscow-Turkey-Iran de-escalation initiative under the Astana talks facilitated the beginning of the peace process in the country.

During the Sochi meeting Lavrov and Pompeo discussed the countries' exit from the 1987 Intermediate-Range Nuclear Forces Treaty (INF) as well as the potential extension of the Strategic Arms Reduction Treaty (New START) set to expire in February 2021. The Trump administration unilaterally suspended the INF Treaty under the pretext of Russia's alleged violation of the accords by developing the 9M729 missile system, despite Moscow's presenting evidence of the system's compliance with the INF.

© AFP 2019 / TED ALJIBE
US Signed Over $1 Billion in Missile Contracts Since INF Treaty Withdrawal
"What we've agreed that we will do is we will gather together teams that will begin to work not only on New START and its potential extension, but on a broader range of arms control issues that each of our two nations have, I think, in our shared best interest achieving an agreement on", Pompeo told reporters during the joint press conference on 14 May.

While Moscow has signalled interest "in renewing a professional and specific dialogue on all aspects of arms control", Washington is pushing ahead with the "serious arms control" that would involve both Russia and China. However, analysts expressed doubts that Beijing would join a US-Russian nuclear reduction treaty.

"China is very averse to its inclusion in a new arms control treaty and I doubt it would even want to enter discussions on the topic", said IAGS co-director Dr Luft. "The elimination of the old arms control regime without any pathway to forming a new one creates a dangerous vacuum that will force the big powers to enter a new arms race".

He explained that currently China's nuclear arsenal remains relatively small when compared with those of Russia or the US. "[Therefore] Beijing does not feel secure about its ability to deter nuclear attacks and coercion, and feels strongly about the need to improve its nuclear forces".

"There is virtually no prospect that China will voluntarily sign up to something that would limit its ability to develop and enhance a credible nuclear second strike capability", he said. "From Beijing's perspective, it makes little sense to restrain oneself against a far more powerful adversary".

According to the 2018 Stockholm International Peace Research Institute (SIPRI), as of January 2018 China possessed about 280 nuclear warheads. For the sake of comparison, the US and Russia had 6,550 and 6,850 atomic warheads, respectively, as cited by SIPRI data.

At the same time Ni admitted that "a non-proliferation treaty without China is a play missing a key character".