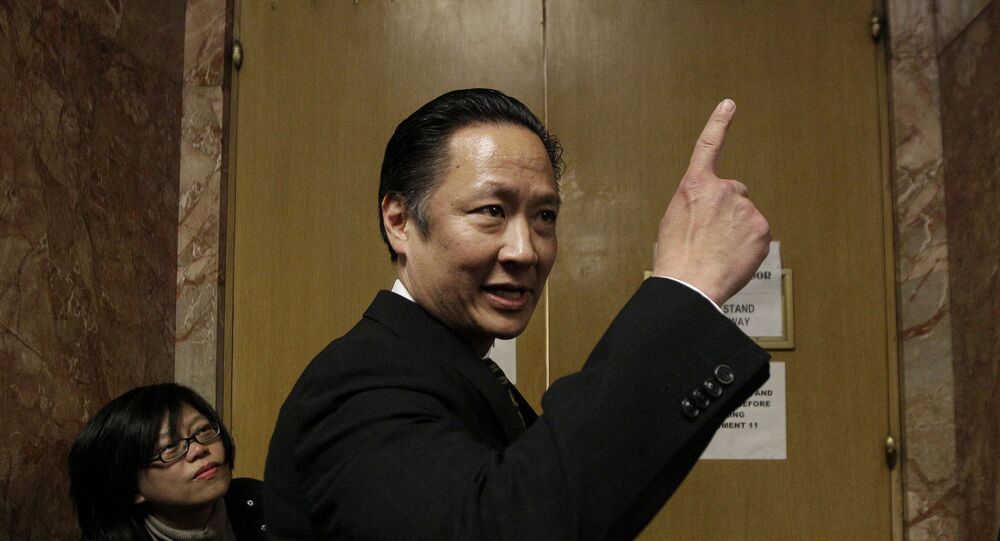 On Friday, a freelance journalist in San Francisco, California, had his home raided by police, who were looking for a report leaked to the press earlier this year about the death of a public defender. An area reporter told Sputnik Wednesday the leak was likely motivated by revenge, and the police were under intense pressure to plug it.

At about 8 a.m. local time on Friday, 10 officers from the San Francisco Police Department took a battering ram to the gate on Bryan Carmody's door. They were there to execute a search warrant for a confidential police report about the death of California Public Defender Jeff Adachi in February 2019. The report had been leaked to the press by an internal source.

Police tracked the report to Carmody, in whose safe they found the report, after details emerged last month that a freelance journalist had sold the report to local news networks for $2,500 each.

However, Carmody is keeping mum about any and all details of who gave him the report or to which networks he sold it. "There's only two people on this planet who know who leaked this report," he told the Washington Post, "me and the guy who leaked it."

Nico Savidge, a reporter with Bay Area News Group, told Radio Sputnik's By Any Means Necessary Wednesday that smearing Adachi's reputation was "at the core" of the leak.

​Adachi, a "crusader for criminal justice reform, also a very vocal advocate against police misconduct and misconduct within the San Francisco Police Department," passed away from a heart attack in February, Savidge noted. "There is an outpouring of grief and of support from a lot of the city's political establishment — which, San Francisco skews pretty left."

"Jeff Adachi was, as you might imagine, not the most popular guy among San Francisco police officers, and very soon after his death, these reports start coming out that paint a really unflattering picture, that have these salacious details," Savidge noted.

​Adachi died from what was initially reported as a heart attack at the age of 59, but on February 24, two days after his death, news stations began reporting, based on a police report and photos obtained from an undisclosed source, that on the evening of his death, the lawyer had been with a woman other than his wife, and that the apartment in which his body was found had "an unmade bed, empty bottles of alcohol, cannabis gummies, and two syringes that may have been left by paramedics," according to ABC 7.

Savidge said the speed with which the confidential report's details were leaked from the department pointed many people to the conclusion that "this was someone within the department trying to smear Jeff Adachi. So there was a lot of pressure on San Francisco police from the city's political establishment to basically sniff out who did this and to hold someone responsible."

"I think that's one of the reasons why you saw them take this pretty remarkable — and a lot of people said illegal — step of raiding a journalist's home," Savidge told hosts Eugene Puryear and Sean Blackmon.

Savidge said it was "certainly the fear that a lot of reporters have" that if you publish something that may have negative implications for people in power or with the police, then the treatment Carmody received is what you can expect.

"There's a lot of concern that this amounts to a chilling effect and really sends the wrong message, as far as press freedom in the Bay Area," he said.

Savidge said he spoke with Carmody on Saturday. "He said, ‘You know, the San Francisco Chronicle… they had the same report. They got this leaked to them… I don't see cops with battering rams going up at their offices.'"

Carmody's "operation" as a freelance journalist who records footage and sells it to news agencies has "essentially been shut down" by the police, who confiscated all his materials, including hard drives and filming equipment, as well as his archives, Savidge said.

Carmody's lawyer, Thomas R. Burke, told the Washington Post the police should've issued a subpoena for the materials, not a search warrant to ransack his client's home.

"There has been some talk that I've seen reported about a possible lawsuit against San Francisco police for this, but I know one of his main concerns is just getting his stuff back and being able to get back in business," Savidge said. "San Francisco police, meanwhile, are continuing their leak investigation, and there haven't been, to my knowledge, any resolutions of who provided these documents to the press or what their motivations were."