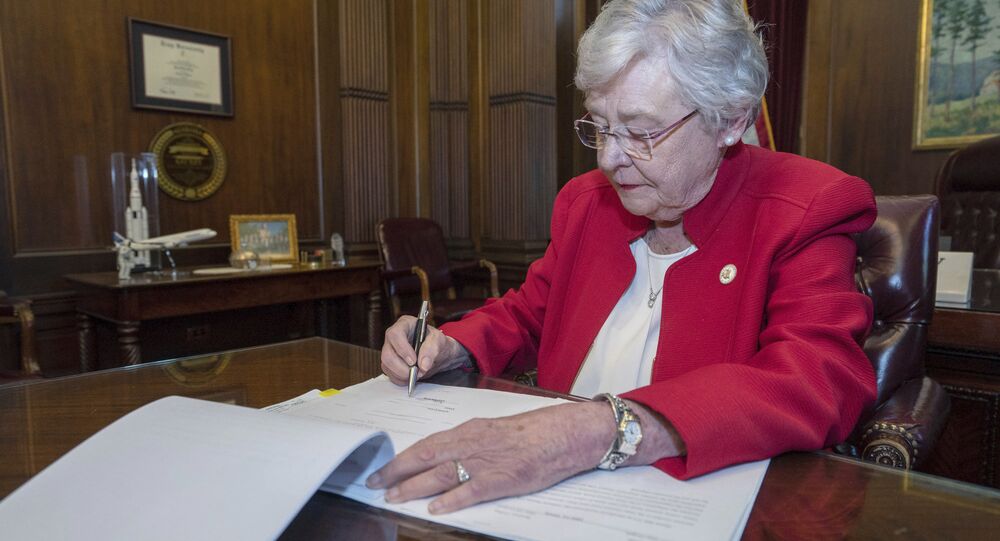 Amanda Reyes, the executive director of Yellowhammer Fund, an organization in Alabama that helps women get abortion procedures, joined Radio Sputnik’s Loud & Clear Wednesday to discuss a hotly debated bill signed into law in the southern US state Wednesday, banning nearly all abortions.

House Bill 314, the "Human Life Protection Act," bans all abortions in Alabama except when "abortion is necessary in order to prevent a serious health risk" to the pregnant woman. The bill also bans abortions for pregnancies resulting from rape or incest and could see doctors who perform an abortion face up to 99 years in prison.

​The legislation was signed into law by Alabama Governor Kay Ivey Wednesday and is the most extreme anti-abortion law passed in the US, threatening to overturn the Supreme Court's landmark 1973 decision in the Roe v. Wade case that protects women's constitutional right to abortion.

According to Reyes, the Alabama legislature passed the law to "gamble" with women's health and to "score political points leading up to 2020."

"This is an outright abortion ban, except in the most extreme health crisis situations for the pregnant person, and even this is very confusing," Reyes told host Brian Becker.

"There were numerous questions in both the [Alabama] House and Senate committees and on the House and Senate floors regarding what is actually defined as a legitimate health and medical excuse under this piece of legislation. And the bill sponsors could not answer those questions, and they responded to those questions by saying that part of the law allows for doctors to make these decisions," Reyes explained.

"And then a second doctor will be hired by the state to essentially investigate the first doctor's decision and determine whether or not that doctor was correct in making a decision to allow someone to have an abortion. If the person that the state has hired to do this investigation says that abortion was not medically necessary in their opinion, the doctor that performs the abortion could be criminalized with a class A felony, which means up to 99 years in prison," she added.

According to Reyes, the language of the bill implies that deaths by abortion in the US are "somehow worse than the Holocaust," which resulted in the ethnic cleansing of 6 million Jewish people.

"By comparison, more than 50 million babies have been aborted in the United States since the Roe decision in 1973, more than three times the number who were killed in German death camps, Chinese purges, Stalin's gulags, Cambodian killing fields, and the Rwandan genocide combined," the bill's text states.

"It [the bill] goes to compare numbers of people who were killed in the Holocaust versus the number of people who had abortions and it is implied, in the language of the bill, that abortion is worse than the Holocaust, which is completely outrageous," Reyes told Sputnik.

"Then, last night, during the debate around the bill, [Democratic] Senator [Rodger] Smitherman mentioned that he wanted to add an amendment to recognize the 1.5 million people who were killed in the international slave trade, and the amendment was voted down by every Republican in the room. So, Senator Smitherman said, if we are going to pass this piece of legislation that lists all these tragic events and all of these crimes against humanity, then we need to list the numbers of African people in the international slave trade, and the Alabama state legislature refused to acknowledge that number," she continued.

Many people, from political figures to activists and celebrities, condemned the law. Staci Fox, president and CEO of Planned Parenthood Southeast, vowed to fight the "dangerous abortion ban every step of the way." The law will become enforceable November 2019, six months from May 15, 2019.

"This is much more than just a women's issue. At the core of abortion politics is bodily autonomy," she added, noting that Yellowhammer Fund plans to launch a local human rights movement in Montgomery, Alabama, because "movements and revolutions" spring from the most marginalized places. The organization also plans to spearhead national and international movements in support of abortion rights.

"We have three clinics that serve the state of Alabama, and the southernmost clinic in the state is here in Montgomery. Some people are having to drive three hours, one way, to get abortion care. And so people who are impoverished, which in Alabama and in most of the US is a majority of people of color… these people are having the most serious access issues in the state with the restrictions we already have. An abortion ban will mean that these people will have worse access barriers, and they will die in greater numbers from childbirth, from bad maternal health outcomes and from self-managing their own abortions," Reyes explained.