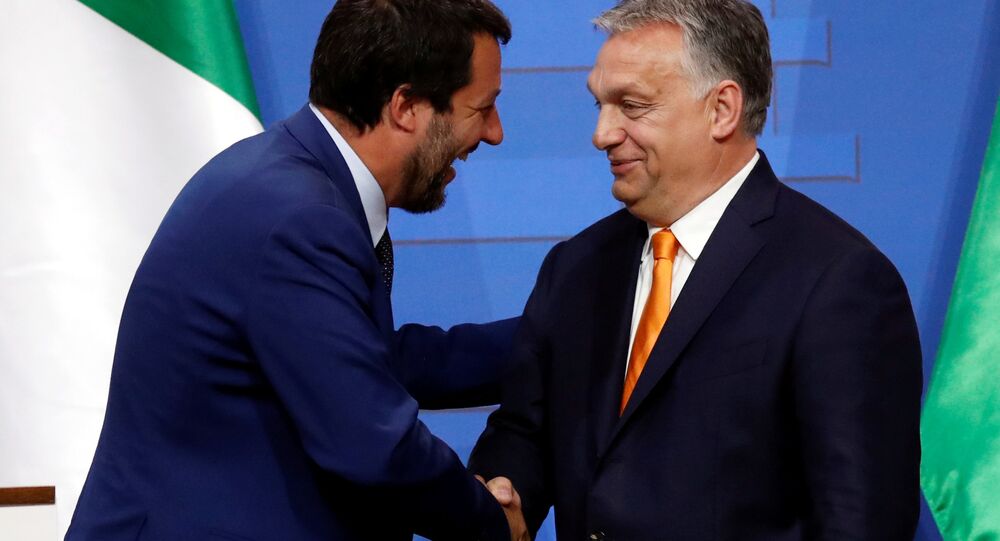 While EU Lashing Out at Orban, Hungary Finds Allies in Italy, US

A potential right-wing coalition is emerging within the EU ahead of the European Parliament vote. Speaking to Sputnik, Associate Professor Bilyana Martinovski and Italian journalist Daniele Pozzati have shed light on the anti-Budapest campaign and Hungary's rapprochement with Italy.

Sweden is stepping up pressure against Hungary ahead of the European Parliament (EP) elections over Budapest's unwillingness to follow the bloc's migrant policy.

While discussing the upcoming EP vote in the Riksdag on 8 May, Swedish Prime Minister Stefan Lofven accused Hungary of "right-wing extremism". Earlier in April, he called upon the EU to impose sanctions on Budapest for its unwillingness to share the migrant burden.

Hungary Under Fire for Firm Stance on Migration

"For more than a decade, all Swedish mainstream politicians, including Stefan Löfven (Social Democrats), Fredrik Reinfeldt (Moderates), and Carl Bildt (Moderates) advertised mass migration as a great investment without which Sweden will perish. If it is such a great investment, why would Löfven or the EU impose sanctions on those who don't want to invest?" said Sweden-based Associate Professor in Human-Machine Interaction Bilyana Martinovski.

© AFP 2020 / TT NEWS AGENCY / JANERIK HENRIKSSON
Rise of the Right in EU: 'People Don't Want to be Raped and Robbed' – Academic
According to the academic, the Swedish leadership is spearheading nothing short of an anti-Hungary campaign.

On 12 February 2019, Annika Strandhall, the Swedish minister for social affairs, dubbed Hungary's family policy "alarming", claiming that it "reeks of the 1930's", a clear reference to Nazi Germany.

Budapest's answer was not long in coming: "[Stockholm] spends money on migrants rather than on families", Hungarian Minister of Foreign Affairs and Trade Peter Szijjarto responded.

"[Löfven's] most recent call for sanctions on other EU countries coincides with an organised 'attack' by Social Democrat politicians and media on Hungary on behalf of George Soros and his political lobbying, which parades as an American tax-exempt apolitical 501c3 charity", the professor noted.

© Sputnik / Irina Kalashnikova
'New Right' to Bring an End to Brussels' Mass Migration Policy – Analyst
Meanwhile "the mass migration continues [in Sweden], the chain migrations grows, municipalities struggle economically with massive economic deficit which is not helped by the weak SEK [Swedish krona], taxes grow, daily violence but seldom justice for the victims, millions taken from schools and medical care to compensate for losses caused by the costly mass migration", she stressed.

Sweden is not the only state subjecting Hungary to harsh criticism. On 25 April, French President Emmanuel Macron suggested that some states could possibly be expelled from the EU's Schengen Area over their unwillingness to share the migrant burden in a reference to the Visegrad Group and, most notably, Hungary and Poland.

Previously, in September 2018, the European Parliament voted to trigger punitive proceedings against the Orban government under the bloc's Article 7 over alleged violations of the EU's "core values" such as attacks on the media, minorities, and the rule of law — something that Budapest has vehemently denied.

Withstanding the pressure from the EU, the Hungarian leadership is seemingly shifting goalposts and turning to other European conservative players before the upcoming elections to the European Parliament scheduled for 23-26 May.

Italy has also been criticised by the EU since it implemented a series of measures preventing illegal migration in November 2018 which has substantially reduced migrant sea landings. Some media opined that Orban may leave the EPP and join Salvini's anti-migrant bloc ahead of the EP elections.

"Ahead of the European Parliament vote, the Salvini-Orban alliance is now moving to the next level: that of reaching critical mass within the EP or, at the very least, of avoiding isolation. Salvini and Orban aim to change the EU — read, some of its policies — from within", said Daniele Pozzati, an Italian journalist and political observer.

© REUTERS / Tony Gentile
How Eurosceptics Won the Day in Italy and Outplayed George Soros
According to Pozzati, Salvini and Orban have a number of natural allies, including Marine Le Pen's National Rally, formerly known as the National Front and the German right-wing party Alternative für Deutschland. He opined that "Salvini's Lega alone could become the European Parliament's single biggest party".

For his party, speaking to La Stampa on 1 May, Orban lambasted the EPP for turning a blind eye to the migration problem.

"The EPP is preparing to commit suicide and wants to tie itself to the left. We need to find another path via cooperation with Europe's right wing", he said.

© Sputnik / Alessandro Rota
Salvini's Right-Wing Alliance Has Difficulties With Bloc's Composition - AfD
In his next move, Orban withdrew support from EPP leader Manfred Weber as a candidate for the role of EU Commission president on 6 May. Previously, Weber told German broadcaster ZDF that he did not want to be elected by "populist Fidesz votes".

"We would have liked Mr Weber as Commission President. But he has announced not only that he would not need the votes of the Hungarians, but that he would not want to become president with those votes", Orban stated during a joint press conference with Vice-Chancellor of Austria Heinz-Christian Strache on 6 May.

In response to Orban's move, Annegret Kramp-Karrenbauer, the leader of the Christian Democrats, told Reuters that "with [the Hungarian PM's] behaviour in the last few days and the meeting with [Italian Deputy Prime Minister Matteo Salvini], he has given a clear sign that he will leave".

Orban Rallies Support on the Other Side of the Atlantic

In an April interview with Sputnik, Bill Ravotti, moderator of the V4 Report, political analyst and republican nominee for US Congress in 1996 and 1998, predicted the emergence of the new right in the EP, presuming that they may affect Brussels' mass migration policy.

However, Sweden-based professor Bilyana Martinovski does not share his enthusiasm suggesting that "immigration is in the hands of [EU] bureaucrats and the deep state, not the European Parliament".

"Migrants and intruders test our borders all the time and when they find out that our laws are not enforced they spread the word to others", she said. "And then they get rewarded for breaking in with showers of tax money. This neoliberal-leftist 'extravaganza', which cost many European families' health and lives, reached a tipping point now and calls for life-preserving wave of conservatism to restore equilibrium".

For his part, Pozzati believes that "Salvini and Orban have already had a massive impact on the EU's migration policy — via their electoral success at home".

"In 2018, the first year with Salvini in office, the number of migrants reaching Italian coasts was slashed by 80 percent — according to the yearly report on security and information policy by the Italian secret services DIS. To change the EU's migration policy from within, Salvini and Orban need first to change, i.e. to move to the right, the centrist, conservative European People's Party (EPP)", he suggested.

© CC BY 2.0 / European People's Party
Orban: We Don't Want to Change Position on Migration, Christian Culture, EU Future
Meanwhile, Orban's visit to the White House on 13 May indicated that the Hungarian prime minister has a powerful ally on the other side of the Atlantic.

"I know he's a tough man, but he's a respected man, and he's done the right thing, according to many people, on immigration", Trump told reporters.

For his part, the Hungarian prime minister stressed that Budapest was "proud to stand together" with Washington "on fighting illegal migration, on terrorism and protecting Christian communities all around the world".

Like Matteo Salvini, President Donald Trump has maintained a tough stance on illegal migration by announcing national emergency and pushing ahead with building a wall on the country's southern border.