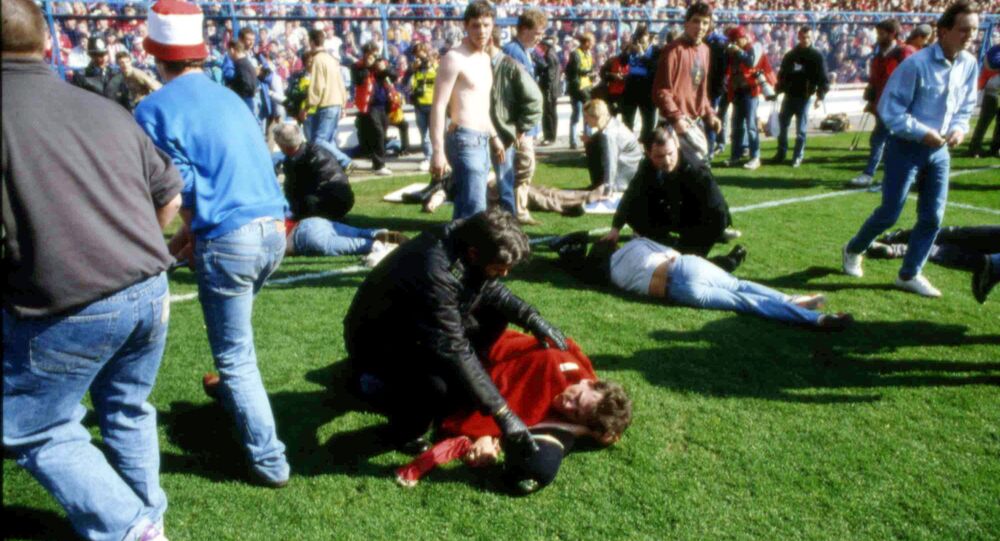 Football was plagued by hooliganism in the 1970s and 1980s and was a "world away" from today's game, defence barrister Ben Myers QC said in his closing speech at the Hillsborough trial. Sputnik spoke to football fan Jerry Case about how the game has changed.

Former Sheffield Wednesday club secretary Graham Mackrell, 69, was found guilty of failing to discharge a duty under the Health and Safety Act last month and on Monday, 13 May he was fined £6,500.

David Duckenfield, 74, who was the match commander for South Yorkshire Police in April 1989, faces a retrial after the jury were unable to reach a verdict on charges of manslaughter by negligence of 95 Liverpool football fans.

The supporters were killed when a gate was opened at the Leppings Lane end of Sheffield Wednesday's Hillsborough stadium just before kick off as Liverpool prepared to take on Nottingham Forest in the 1989 FA Cup semi final.

Hillsborough Trial: Ex Ch Supt Duckenfield's QC closing defence speech: "There doesn't have to be one person to blame or scapegoat, things can be out of control."

​The trial at Preston Crown Court heard it was Duckenfield's decision to open the fateful Gate C and he also erred by not ordering the 3pm kick off to be delayed.

But how has football changed in Britain since the sickening events of 15 April 1989?

Hooliganism Was The Norm in 1980s

Duckenfield's QC, Ben Myers, said the prosecution was "breathtakingly unfair" and he said the events of Hillsborough had to be seen through the prism of policing in the 1980s.

Graham Mackrell, former Sheffield Wednesday club Secretary, has today been sentenced to a fine of £6,500 and costs of £5,000 for his role in the Hillsborough disaster 30 years ago.
MORE: https://t.co/4Lul4Tdzc2

​He said hooliganism was an intrinsic part of football in the 1980s.

"It affected how police planned the event and how they would react as matters unfolded," Mr Myers told the jury.

Defence do not suggest there was an issue with drunken fans on 15.4.89 but say if people go for a drink before game they are likely to arrive later and experienced matchday officers said arrival of fans in 1989 was "unusual" and "unique"https://t.co/d71rzOKYPw

​Four years before, Liverpool fans were involved in an equally notorious tragedy — the Heysel disaster in Belgium.

Prior to the European Cup Final, Liverpool and Juventus fans began hurling missiles at each other on the terraces of the decrepit Heysel Stadium in Brussels.

Fourteen Liverpool fans were eventually convicted of manslaughter and the British Prime Minister Margaret Thatcher was so ashamed that she ordered the Football Association to withdraw clubs from European competition.

For five seasons English clubs were banned from participating in the European Cup aswell as the Cup Winners' Cup and the Uefa Cup (which merged in 1999 to become the Europa League). Ironically the most affected club were Liverpool's cross-city rivals Everton, who won the championship twice but were denied entry into the European Cup.

Football hooliganism, known as "the English disease", had started in the 1970s but it got worse throughout the 1980s.

England's national team were followed by a hooligan element at away matches and tournaments and several clubs became notorious for their hooligan element — Leeds, Chelsea, Millwall, West Ham, Birmingham, Portsmouth and Cardiff.

In March 1985 Millwall hooligans wrecked Luton's ground during a cup match, leading the home team's chairman David Evans, who was later to become a Conservative MP, to announce a complete ban on away fans and the introduction of a controversial members' scheme.

In May 1985 police horses were used to cavalry charge rioting thugs and a 15-year-old boy, Ian Hambridge, died when a wall collapsed during clashes at Birmingham City during and after a game against Leeds.

ON THIS DAY 1986: Leeds United riot at Bradford's Odsal Stadium turning a chip van over and setting fire to it #LUFC pic.twitter.com/n6xZBudott

​The following year Leeds fans were involved in another riot, this time at Bradford City's Odsal Stadium. Leeds hooligans set fire to a chip van, which was a particularly tasteless thing to do at Bradford, which had suffered a horrific stadium fire 12 months earlier, which killed 56 people.

Jerry Case, 57, has supported Brighton and Hove Albion — who are now in the English Premier League — since the early 1970s and he says football fans were treated little better than animals.

"Back in the '70s and '80s football was not something your mother would want you to follow. They'd prefer you went to rugby or cricket. It was the dirty sport. You were not regarded as a customer in any way. Refreshments were appalling, the toilets were disgusting," Mr Case told Sputnik.

"Having gone to baseball games in the US in the 1980s the difference even then was unbelievable," Mr Case told Sputnik.

He was attacked twice — once by Sheffield United fans at an away game, and once at a game in Brighton by a Leeds thug who was jailed for the assault.

Duckenfield's lawyer told the Hillsborough trial it was obvious now, but not then, how dangerous it was to put large numbers of people on terraces, penned in by solid steel fences on either side.

"The pens were designed so you couldn't even get out of the middle pen and go to the pens on either side, which were not as crowded," Mr Case told Sputnik.

Hillsborough Trial: Prosecution QC Richard Matthews closing speech: Ch Supt Duckenfield is not being unfairly singled out: "Others may have failed, others may have made mistakes. No-one else was the match commander… He was the person with ultimate responsibility on the day."

​Mr Case said he vividly remembered his reaction when he heard what had happened to the Liverpool fans on that day in April 1989.

"My feeling when I heard about Hillsborough was that it could so easily have been me. All you could see on that terrace was crushing and people up against the fences. It could have happened to anyone," he told Sputnik.

"They were very different times politically. Margaret Thatcher saw how awful it was and thought fans were disgusting and tried to bring in Draconian things like ID cards and treated fans like second card citizens," Mr Case told Sputnik.

Mr Case said things only changed for football supporters after the publication of the Taylor Report in January 1990, which recommended terraces and fences be phased out and replaced with all-seater stadia.

'Football Has Only Been Fashionable Since 1990'

"The 1990 World Cup is when football became fashionable. After that women started coming and it was seen as more acceptable to go to the football. It was a much more diverse section of society and families started to come back. All-seater stadiums and better safety made it more attractive to more people," Mr Case told Sputnik.

During the 1990s old-fashioned stadiums like Arsenal's Highbury, Sunderland's Roker Park, Stoke City's Victoria Ground and Derby County's Baseball Ground were knocked down and replaced by all-seater stadia, many of which were on the outskirts of town.

He said football was in most respects better nowadays than in the 70s and 80s but he said he missed the old grounds and the special pre-match atmosphere.

"There are still places today where you have to be a bit wary because there are a minority of mindless morons at lots of places, such as Cardiff and Millwall," Mr. Case told Sputnik.