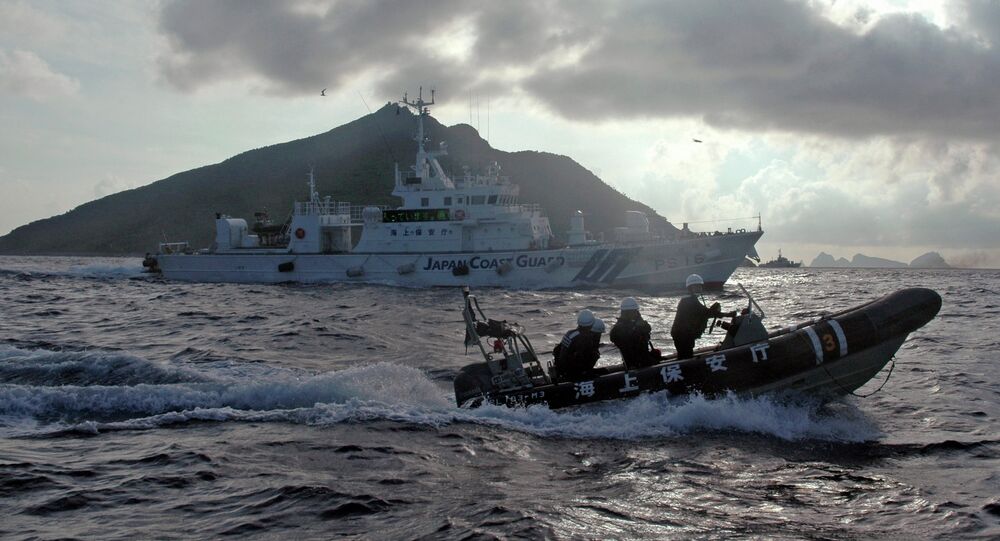 US Policy Could Converge Sino-Japanese Ties Despite Territorial Feuds - Pundits

Marine amphibious forces on Japanese warships in its south-western water area are a new irritant for Beijing, so believe experts interviewed by Sputnik commenting on Yomiuri's message about the possibility of deploying Japanese ground forces aboard warships of Japan Self-Defence Forces.

However, experts believe that Japan creating a new permanent combat unit will in no way affect the progressive development of Sino-Japanese political and economic relations.

The Japanese newspaper, citing anonymous government sources, reported that up to 300 marines of the brigade for the rapid deployment of amphibious forces were operating on the Ōsumi-class tank landing ships.

They were attributed to the Japan Ground Self-Defence Forces. This marine brigade was first introduced by Japan Self-Defence Forces in April 2018. It is based, in particular, at the locations of the Marine Corps in Okinawa, where they were relocated from the island of Kyushu.

Yomiuri Shimbun also said that these mobile units could be deployed as early as next year aboard warships with a displacement of 8.9 tons. These ships are capable of carrying up to eight helicopters and also have specially equipped decks at the stern, from where small amphibious ships can be launched.

© REUTERS / Japan Maritime Self-Defense Force/Handout via Reuters/Files
Despite Warnings from Beijing, Japanese Sub Visits Ex-US Navy Base in Philippines
Japan has been expanding its military potential in the south-western area for more than a year, said in an interview with Sputnik Chinese expert Yang Danzhi, an assistant director at the Centre for Regional Security Studies of Chinese Academy of Social Sciences.

“Japan is currently strengthening its defence positions in the south-west direction. It has already deployed rapid response units on its southwest islands. For example, around the Diaoyu Islands (Senkaku Islands – ed. note Sputnik) there have been a number of security incidents. In case of deployment of a rapid reaction force, Japan would have the opportunity to deliver quick strikes. Therefore, the landmark nature of the deployment of rapid reaction forces, as well as their potential danger, attracted some attention from the international community. Now Japan intends to deploy ground-based rapid reaction forces on warships. In fact, this deployment may mean the possibility of Japan being involved and intervening in crisis situations beyond its borders, as well as carrying out preventive strikes. Japan’s deployment of rapid-reaction forces on warships actually shows that its Self-Defence Forces began to acquire aggressive signs, changing the concept of its development from defensive to offensive. The deployment of ground-based rapid reaction forces to warships also shows that Japan’s potential to intimidate and interfere in the affairs of its neighbours and states located along the perimeter of its borders are increasing”.

Japan has territorial disputes with China, constantly demonstrating its desire to protect the Diaoyu Islands (Senkaku Islands), which Japan considers its own. Amphibious units are designed to strengthen its deterrent potential against the so-called “external aggression”, said Valery Kistanov, the head of the Centre for Japanese Studies at the Institute of Far Eastern Studies of the Russian Academy of Sciences.

“The main threat, as it is officially recognised in Tokyo, is China with its growing military power and active naval activities, particularly around the Diaoyu Islands. The increase in the landing potential of the Japan Self-Defence Forces is explained by the alleged need to protect the southern islands of Japan, as well as the disputed Diaoyu Islands from the possible ‘aggression’. In the event of the loss of these islands, the Japanese are likely to try to recapture them from China”.

© Flickr / US Air Force
US Pressure Driving Expansion of Japanese Defense Forces - Activist
Recently, Japanese Defence Minister Takeshi Iwaya visited Miyako Island of Okinawa Prefecture, calling them “the first line of defence of Japan”. The Defence Minister also confirmed Tokyo’s concern about Beijing’s military ambitions in the area. In this regard, he announced that next March, the latest versions of anti-ship missiles and surface-to-air missiles would be placed on this island in March of the next year in the Japan Ground Self-Defence Forces camp.

The upgraded version of type 12 Surface-to-Ship Missiles will have a range of up to 300 kilometres, while there are only about 200 kilometres from Miyako Island to Diaoyu Islands.

Obviously, China will not leave unanswered the growth of military activity of Japan near its borders. Meanwhile, a new serious irritant, according to Valery Kistanov, “in general, will in no way affect bilateral relations”. The expert believes that the “American factor” creates a new powerful incentive for rapprochement for China and Japan.

“The United States has a very tough, aggressive offensive trade policy towards China and Japan, so they have a reason to converge. This is actually the impetus that allowed them to put aside feuds, including territorial ones, and strengthen economic ties”, the expert believes.

He recalled that Prime Minister Shinzo Abe visited China last year. Perhaps President of the People's Republic of China Xi Jinping will come to Japan, not only at the G20 summit but also as an official visitor of Japan.