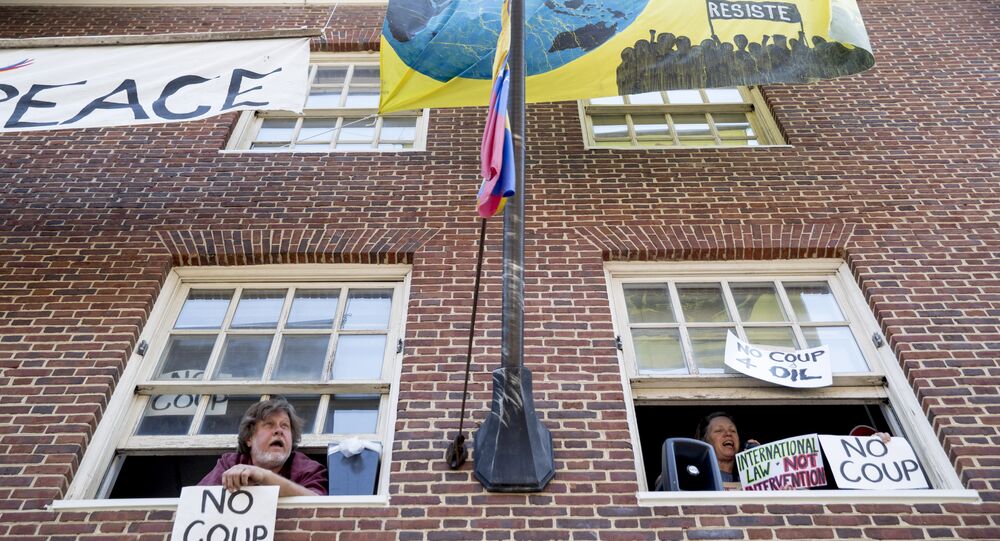 When Venezuelan opposition leader Juan Guaido called for a coup on Tuesday, his sympathizers in Washington, DC, leapt into action as well, converging on the country’s embassy and laying siege to the anti-war activists defending the facility on behalf of President Nicolas Maduro. However, the activists have held on and survived the coup attempt.

Guaido has claimed to be Venezuela's interim president since January 23, being recognized in such a role by the US and several dozen Latin American and European countries. However, Guaido enjoys little support in Venezuela itself, and his three attempts to encourage national uprisings against Maduro have all fizzled. Maduro, who was reelected in May 2018, continues to enjoy both the loyalty of the military and the general population, and is recognized by three-quarters of the world's countries as Venezuela's legitimate president.

Several dozen activists from left-wing groups such as Code Pink, Popular Resistance, the ANSWER Coalition and Black Alliance for Peace have formed an Embassy Protection Collective to defend and take care of the Venezuelan Embassy following the departure of that country's last remaining diplomats several weeks ago. Fearing the facility would meet the fate of other such offices in the US and grant Guaido undue legitimacy as Venezuela's interim president, the activists established a legal tenancy with the Venezuelan government and set up shop in its offices, where they have lived for three weeks.

Radio Sputnik's Loud and Clear spoke with Kei Pritsker, an activist with the Embassy Protection Collective, about this week's events in and around the diplomatic compound.

​Pritsker told hosts Brian Becker and John Kiriakou he'd been living in the embassy for the last two weeks.

Pritsker said he was at the embassy for a number of reasons, including not only "the illegality of what the US government and the Guaido coup is claiming it has ownership of this building" but also that the activists have become legal tenants of the building.

"I'm here to point out that, under the Vienna Convention of 1961, Articles 22 and 45, that this embassy is inviolable; they can't take it without evicting us, because we are tenants here," Pritsker said, noting that the legal owners of the building remain the Venezuelan government, which is headed by Maduro and not Guaido. "We are living here with the permission of the Maduro government. We're doing services; we're living here, cleaning," he said.

"Their move is illegal, but moreover, I'm here as a US citizen that's opposed to war," Pritsker said. "We're absolutely here as peace activists."

Noting that dire problems of poverty are not limited to Venezuela, Pritsker rejected the idea that "Americans have any interest in overthrowing the Venezuelan government," saying, "the Venezuelan people are not our enemy. It's the corporations that are robbing everyday people, that are robbing Main Street. That's our problem, in my opinion."

Pritsker told Sputnik that since "the second the opposition folks showed up" at the embassy, "it's been tense, because they've brought such vitriol and hatred."

​Alexander Rubinstein, a MintPress News journalist who's been embedded at the embassy and reported on the daily events there, wrote in a Wednesday article of the many instances of racism, sexism, homophobia and transphobia experienced by embassy defenders at the hands of opposition protesters, several of which were captured on film.

One instance captured on film saw Pritsker pulled down brick stairs in the rear of the compound, resulting in ripped clothes, bruises and scrapes along his arms and torso.

Opposition violently attacks protectors and still, secret service and police do nothing pic.twitter.com/ucPX6TvGFV

​However, this act of violence, like the rest of the harassment and intimidation shown by the opposition, went unanswered by the police present, which included not only Washington's Metropolitan Police Department but also the Secret Service.

Lawyers acting on behalf of the collective have repeatedly complained to the respective police departments about their indifference to the opposition's behavior, up to and including the cutting off of food and other supplies from entering the embassy, noting it violates local, national and international law for them not to protect the embassy.

Several activists, including Code Pink National Co-Director Ariel Gold, have been arrested in recent days for trying to break through the opposition's siege of the building and get much-needed food and medicine in to the collective members.

​Activists eventually and ingeniously got some supplies in on Friday using a pulley system out of an upper storey window.

Pritsker said the opposition was quite open about their strategy being to starve the collective out, mocking the activists through the windows.

"The cops know this, they have to hear it, and they're complying. They're allowing the opposition to lay siege to the embassy," he said.

But despite this, Pritsker said the collective has received unending support from the outside, with people turning up with food, medicine, tampons, toothbrushes and other supplies they wish to donate to the collective in support of their cause, even if much of it has yet to reach the inside.

"We've already won, and each second that we remain here is another victory. Carlos Vecchio, one of the members of the coup's diplomatic mission, the fake opposition, ran off scared because our speakers, our chants, drowned him out. He tried to give a press conference saying this was his building — and he surrendered. He ran off."

Carlos Vecchio and the coup representative are here. Guaidó supporters are facing off with activists defending the embassy. Cops and secret service are everywhere. pic.twitter.com/2eSUMHqOso

© AP Photo / Fernando Llano
‘Fracas in Caracas’ Signals US Attempt to Gain Hold Over Oil-Dependent Countries
​"Every single day — you say they must be feeling disheartened — you can see it in their numbers," Pritsker said of the opposition protesters. "The first day they were out, [there were] maybe a hundred people, there were a lot of people out. The next day they were half; yesterday, there was even less than that. Today, there are probably 10 or 15 people out front. It's really shaping up to be a disappointment [for the opposition], and that gives hope to the people inside."

"We are encouraged. We're staying here until there's someone in charge of taking over this building, until there's a negotiation reached between the Venezuelan government and the US government, or until we're removed," Pritsker said. "But we're not leaving. We're tenants here, and we're going to keep fighting."