Donald Trump’s US administration is preparing to ramp up its backing of Venezuelan opposition leader Juan Guaido. But could this be a precursor to direct military intervention? Sputnik spoke with journalist Nick MacWilliam for more.

Sputnik: Could the US intervene militarily in Venezuela?

Nick MacWilliam: This is the line that the US wants to promote. We've just heard Mike Pompeo saying that military intervention will go ahead if Maduro is not removed by other means, but at this stage I think this is a bluff, it's designed to maintain the pressure on the Maduro government, to increase the instability and to basically terrorise and to pressure the people of Venezuela into taking a stand against Maduro.

In terms of the other Latin American countries; the likes of Bolsonaro in Brazil and Duque in Colombia seem to all be in competition with one another, as to who can please the US the most, and who can make themselves the most subservient to the United States.

Sputnik: Why is the US so determined to install Guaido as leader of Venezuela?

In Colombia there have been five hundred social activists murdered there. Each year in Brazil the police kill thousands of predominately black men in the favelas then. Brazil's situation with the former President Lula, who was locked up on very dubious charges, and was declared favourite to win the election that saw Bolsonaro elected in October last year. 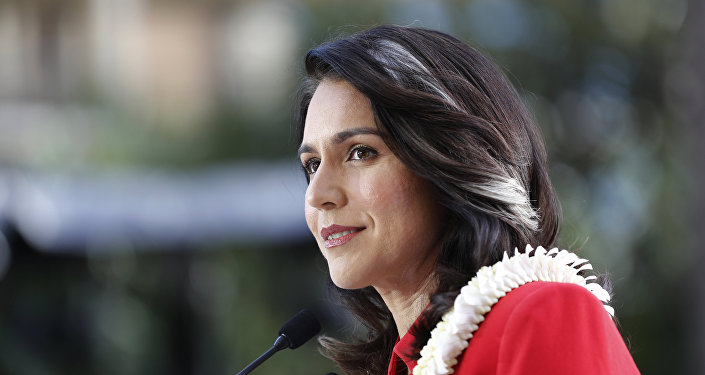 © AP Photo / Marco Garcia
‘Today, Venezuela. Tomorrow, Iran? Cuba?’: Dem Candidate Gabbard Slams Washington’s War Rhetoric
Bolsonaro is a very close ally of Donald Trump, as is Duque in Colombia, and also we see the likes of Honduras where there are currently massive anti-government protests going on, which was also after the government was re-elected in November 2017, in what appears to have been a very fraudulent election.

This has nothing to do with democracy or human rights; it is entirely about removing a government that is opposed to US dominance in the region, which has shown an alternative path is possible, and getting hold of the country that has either the first or second largest oil reserves in the world.

If Maduro was a tyrant; Guaido would have been taken out a while ago, yet he is still walking the streets freely, and able to organise against the government, and basically to assume power so that he can essentially hand over Venezuela's massive reserves to the United States, and Guaido appears ready to support military action in his own country and against his own people.

*Views and opinions expressed in this article are those of Nick MacWilliam and do not necessarily reflect those of Sputnik.