Juan Guaido’s third attempted coup against Venezuelan President Nicolas Maduro has failed just like the rest, but that hasn’t stopped the US corporate media from turning it into a heroic mass uprising for Americans to see. An activist told Sputnik the coverage is setting the stage for a war, but that both Americans and Venezuelans would resist it.

Guaido has claimed since January 23 to be Venezuela's interim president, calling Maduro's May 2018 reelection illegitimate. However, despite three attempts to divide the military ranks and raise a revolution in the country, Guaido's opposition remains a small force that's only proven capable of causing violence and chaos, not of grasping the hearts and minds of fellow Venezuelans.

Meanwhile, Washington officials continue to raise the specter of military force against Maduro's government, which is still recognized by three-quarters of the globe's countries as the legitimate government of Venezuela.

Radio Sputnik's Loud and Clear discussed the situation with Gerry Condon, a Vietnam-era US veteran and peace resistor who is now the national president of Veterans for Peace and who recently returned from Venezuela; and Paul Dobson, a writer for VenezuelAnalysis.com, who reported from the Venezuelan city of Merida.

​Dobson said the country Thursday seemed "relatively calm and stable" by comparison to earlier in the week.

"The events of Tuesday were to some extent, we can say, exaggerated by the international press," Dobson noted. "There was definitely an attempted coup d'etat, but the extent to which Juan Guaido's looking to grasp power was a lot weaker than he was perceived in the international corporate press."

"Juan Guaido came out about five o'clock in the morning on Tuesday with a video message to his supporters saying he was taking a military base in Caracas with the support of ‘the main military units of the country.' Both of these statements were later proven to be incorrect: he was outside the military base, not inside of the military base, and he had control of roughly 30 soldiers, of which about 25 were there, who later claimed they were tricked, according to their commanders. He later rejected their participation in this, and only 15 soldiers were left, essentially, on the side of Juan Guaido," Dobson said.

"Thereafter, we saw significant civilian demonstrations across the country, principally in Caracas, but in other cities as well," the writer told Sputnik. "We saw attempts by Juan Guaido's supporters to both pressure through peaceful means but also violence the local military commanders to rebel against their chain of command, all of which was unsuccessful. By the end of the day, we saw Juan Guaido's mentor and main political ally, Leopoldo Lopez, flee to both the Chilean and then later Spanish Embassy, where he is still holed up, and Juan Guaido went on record by calling his people onto the streets and to continue his struggle on Wednesday."

​"So yesterday, May Day, the government, who had already planned a traditional May Day march for the workers, made a new call for the people to come onto the streets and defend the national territory from this attempted coup d'etat — and the people responded," Dobson said. "The march seen in Caracas has been described by many analysts as one of the largest Chavista marches in recent years."

Dobson noted the opposition also "held an activity in eastern Caracas" that was "considerably smaller" and turned violent in the evening hours amid confrontations with the police and national guard, resulting in one death.

"Juan Guaido is free, still roaming the streets, but it can only be considered a complete failure for him, both in terms of achieving his political objectives, but also any sort of projection of power or domination here in the country. He is looking weaker now than he ever has been in the past," Dobson said.

May Day in Caracas, Venezuela. This is for you @marcorubio. pic.twitter.com/M0J5jZ97z7

​Condon told Sputnik that during his trip to Venezuela just before the most recent coup attempt, there was "no visible support for the opposition whatsoever" in the large, poor, working class districts. "I doubt, frankly, that Juan Guaido would even dare set foot in those barrios. He's not welcome there. There's a huge class divide; the opposition is largely white, middle class, of course led by wealthy ultra-right [wing] oligarchs, and they have even attacked people of color at those opposition marches, because if you have dark skin, you're assumed to be a Chavista — a supporter of the government." 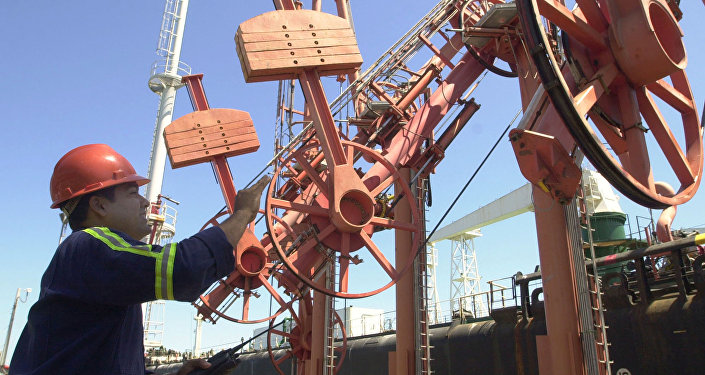 Calling the most recent coup attempt a "Hail Mary pass, a hope and a prayer," Condon said it seemed "staged more for the US audience. The real coup took place in the media… consistently [in] all of the mainstream media, there's not a single voice you hear on the media against the US intervention, against the regime change effort. So it's, in a sense, quite a big propaganda coup in the US media, aimed at the US people, perhaps preparing the way for a US military intervention."

The activist said Veterans for Peace was calling on US soldiers to "resist participation in any military action" in Venezuela, noting that he expected "massive resistance" to such action, both on the ground by militias organized in the barrios, but also by the US soldiers themselves, who are "just fed up with having been deployed to one failed war based on lies after another."

"I think that [US President Donald] Trump and his gang have kind of thrown down, they've kind of announced to the world that they are going to overthrow the Venezuelan government. I think they're almost going to have to do something just to try to save face," Condon said. "But I think their options, nonmilitary and military, are very limited, and I'm hopeful the resistance in Venezuela and around the world in solidarity with the Venezuelan people is going to triumph, and we're going to turn a corner in the history of this hemisphere."