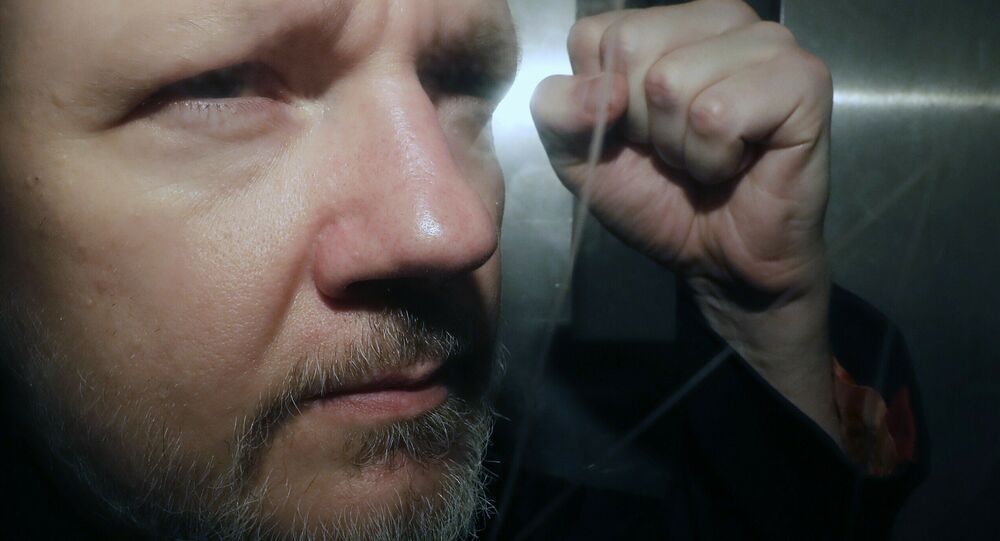 ‘Playing a Holding Game’: Assange May Be Taken to Unknown Location Instead of US

Karen Kwiatkowski, an activist and former US Air Force lieutenant colonel who left the armed forces in protest of the invasion of Iraq, joined Radio Sputnik’s Loud & Clear Wednesday to discuss the recent sentencing of WikiLeaks founder Julian Assange for skipping bail in the UK in 2012.

Assange, who lived within the Ecuadorian Embassy in London for nearly seven years, was arrested last month after Ecuador revoked his asylum. On Wednesday, Assange arrived at Southwark Crown Court in central London, where he was sentenced to 50 weeks in jail.

The Australian had been holed up inside the London-based Ecuadorian embassy to avoid extradition to Sweden over a since-closed sexual assault case, and over fears of being extradited to the US for his publication of military intelligence documents that detailed war crimes committed by US forces in Iraq and Afghanistan.

"You remained there for nearly seven years, exploiting your privileged position to flout the law and advertise internationally your disdain for the law of this country," Judge Deborah Taylor told Assange as she sentenced him two weeks short of the 12-month maximum sentence, while Assange supporters in the courtroom chanted "shame on you."

"Your actions undoubtedly affected the progress of the Swedish proceedings. Even though you did cooperate initially, it was not for you to decide the nature or extent of your cooperation with the investigations. They could not be effectively progressed, and were discontinued, not least because you remained in the embassy," she added, also claiming that Assange's residence in the embassy cost British taxpayers $21 million.

Taylor was also unsympathetic to Assange's pleas for leniency, as his lawyer, Mark Summers, read a handwritten letter by Assange in which he described that he had been "struggling with terrifying circumstances" when he skipped bail.

"I did what I thought at the time was the best and perhaps the only thing that could be done," Assange wrote in the letter, explaining that he breached bail conditions because he was fearful of being extradited to Sweden, where officials would've unflinchingly turned him over to US authorities.

Summers also expressed to the court that Assange was terrified that being handed over to US authorities would essentially equate to being renditioned to Guantanamo Bay or facing the death penalty.

According to the European Center for Constitutional and Human Rights (ECCHR), Sweden has a "bloody record of illegal cooperation with the US." Sweden has been condemned 17 times by international bodies, including the European Court of Human Rights, the UN Human Rights Council and the UN Committee Against Torture, since 9/11 "for not respecting the basic standards of the Geneva Convention on Refugees or the prohibition to extradite to countries where there is a risk of torture or inhumane and degrading treatment," the ECCHR states on its website.

"What I am hearing from insiders, people who have access that I certainly no longer have… is that the CIA, specifically, has been interrogating him wherever he is at… and there is no lawyer [present during the interrogations]. Will they be torturing him on British property? Well, it's been done before, so I'm a bit concerned. The anger and vindictiveness of both governments — the US particularly, because the US is driving the UK policy here; they're peas in a pod — the aggressiveness in the persecution is very concerning," Kwiatkowski told host John Kiriakou.

Following Assange's sentencing, Kristinn Hrafnsson, the editor-in-chief of WikiLeaks, also commented on the vindictiveness of the court ruling, stating that it "doesn't give us a lot of faith in the UK justice system for the fight ahead," the Guardian reported.

"I don't think they're going to [bring Assange back to the US]," Kwiatkowski told Sputnik.

"I think he's going to be renditioned somewhere. If he comes to the Eastern District Court of Virginia, there are activists here, and we have some freedom of movement and speech in the US. The publicity associated with any trial will not be what the US government wants. I think that if they [US authorities] think they can get away with [trying him and putting him away forever], they will do it. But I think there is a big chance they won't be able to get away with it. He's going to be whisked away to some other location… his lawyers won't be able to find him," Kwiatkowski speculated.

According to Kwiatkowski, Assange is a "compelling, intelligent person" and is a "principle-driven man." As a result, US officials don't want him to have a platform.

"I think they [US officials] want the Assange story to go away. If we don't hear from him [in those 50 weeks he is in prison], and his lawyers don't have contact with him for 30 days, he could be down in Guantanamo. And there are lots of countries that will cooperate in this witch hunt [against Assange]," Kwiatkowski told Sputnik.

In addition, Kwiatkowski is doubtful that the US would use the 1917 Espionage Act in a court of law against Assange if he is extradited to the US, because appeals against the Act could deem many parts of it unconstitutional over its potential violations of free speech.

"They [US officials] would not want to put the Espionage Act language at risk in a court of law, because it's a bad act. It's poorly written. It could be used in a number of ways that [even] the New York Times does not want to see it used. If they explore that in a court [that] has a defense, even if it's not a great defense, problems would arise; it could be even found unconstitutional," Kwiatkowski explained.

"There would be grounds for appeal to go up and change the whole [act]. That's another reason why I am fearing greatly he will disappear. I don't mean that he [will be] killed, but [that] he will go away from public view… away from his lawyers. I think we are watching a big play, and it's being controlled not by us — not by the supporters of Julian Assange and the supporters of journalists — but by these governments."

"We are playing a holding game. I don't see a happy ending for this," Kwiatkowski added.

Doomed to be Handed Over to US, Assange Still Has Cards Up His Sleeve – Analysts