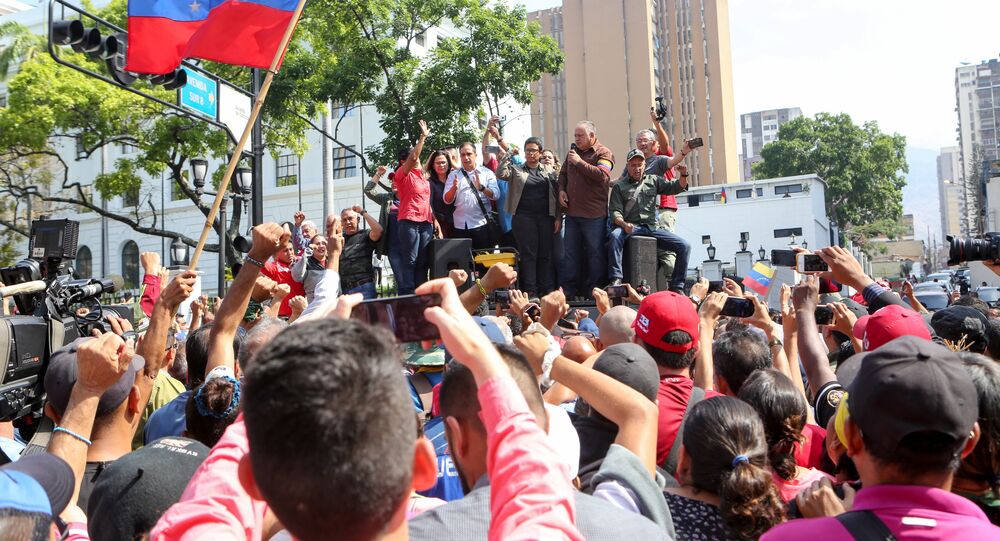 Early Tuesday, Venezuelan opposition leader Juan Guaido declared “Operation Freedom” in a video and called on people to take to the streets against President Nicolas Maduro’s government. However, his latest coup attempt has failed amid stiff resistance by pro-Maduro forces both in the country and in Washington, DC, journalists told Sputnik.

"The moment is now," Guaido said in a video, flanked by fellow opposition leader Leopoldo Lopez and troops of the Venezuelan national guard. "I invite you to take to the streets," he said, declaring Tuesday to be the "beginning the final phase of Operation Freedom."

Guaido has claimed since January 23 to be the country's interim president, but most of the population and military have remained loyal to the democratically elected Maduro, despite endorsements from Western powers and Lima Group nations of Guaido's claims. Numerous international organizations, including the United Nations, International Monetary Fund and three-quarters of the Earth's nations continue to recognize Maduro as president instead of Guaido, a man so unpopular that 85 percent of Venezuelans reported having never heard of him at the time of his January proclamation.

While elements of the national guard loyal to Guaido seized control of the Altamira neighborhood in Caracas' affluent Chacao district, no coup movement rallied around Guaido's men. However, violent clashes were reported throughout the city, including reports of gunfire near a Guaido rally and television footage of an armored car charging into a group of demonstrators. It's unclear at the time of this writing whether the armored car was driven by pro-coup national guard forces or pro-government ones.

On Tuesday, Radio Sputnik's Loud and Clear spoke with Lucas Koerner, an activist and writer for VenezuelAnalysis.com, and Sputnik News analyst and producer Nicole Roussell, who reported on the situations in Caracas and Washington, DC, respectively.

​"No signs of an actual fissure are apparent" in the Venezuelan military, Koerner told hosts John Kiriakou and Walter Smolarek. "The protests that emerged at the beginning of the day, likewise, are petering out and are turning into violent ‘guarimba' protests of the kinds that were seen in 2017 and 2014, of just small focals of radical groups clashing with authorities, though definitely this situation is very fluid, and definitely there are violent clashes taking place."

"It's very unclear, with some elements of the military, of the national guard, around the National Assembly did come out to support Guaido. Likewise, elements of the SEBIN [Bolivarian Intelligence Service], the security apparatus, freed Leopoldo Lopez, who himself was convicted for his role in leading the 2014 violent anti-government protests, and in that moment sought to overthrow President Maduro."

Koerner noted that since the violence was designated an attempted coup d'etat, "weapons were reportedly made available to these groups," and that while there were reports of gunshots in the east of Caracas, it's presently unclear "who was shooting at whom and who was responsible. As of now, there have been no serious injuries or deaths reported."

However, the conflict between pro-Maduro and anti-Maduro forces isn't confined to Venezuela. In Washington, DC, a coalition of anti-war protesters from groups such as Code Pink, Act Now to Stop War and End Racism (ANSWER), Popular Resistance and Black Alliance for Peace have formed the Embassy Protection Collective. With the permission of the Venezuelan government, the activists have taken up tenancy in its embassy in the city's Georgetown district to stop the building from being seized by pro-Guaido forces — a fate already met by other Venezuelan diplomatic offices in the US.

On Tuesday morning, as reports flooded in of renewed violence in Venezuela, supporters of Guaido flooded the brick-paved streets around the Washington embassy and clashed with the collective, who defended the building from incursion.

Roussell told Sputnik that while the collective began living in the embassy over two weeks ago, only Tuesday did they converge on the building in significant numbers.

Two women with the opposition gave me their middle fingers as the crowd chanted Guiado's name repeatedly pic.twitter.com/72Y7dZd19E

​"The people who are protecting the embassy are here, they're up front, they're holding signs saying ‘Hands Off Venezuela,' they are singing, they are chanting, and the number of people who are here supporting Guaido is lessening throughout the day."

"There's also a large police presence here," Roussell said. "We've got at least a dozen, maybe two dozen US Secret Service who are here, and they are saying that they're here to keep the two groups separate, but they're also not letting food across the barricade into the camp of the people who are protecting the embassy. It's not clear what's going to happen and definitely not clear what the police are actually here for, and we're going to have to see what happens over the next couple of hours."

Roussell noted that the collective members inside the embassy had managed to resupply their comrades isolated behind the police barricade by lowering food down from a window above, "but the Secret Service got extremely upset about that."

​Koerner said that following the publication of Guaido's video showing him in front of national guardsmen who had reportedly sworn loyalty to him, Venezuelan Defense Minister Vladimir Padrino reaffirmed the military's support for the Maduro government. "He referred to those responsible as ‘traitors' and as ‘cowards.'"

Padrino also suggested they "appeared to be tricked into doing so," noting they "thought they were participating in some kind of military exercise by this sergeant and the majors who are commanding them, but it turned out they were being tricked by Guaido. That remains to be confirmed, but as of now there have been no ranking military officers that have come out to support Guaido."

He noted that some of the reports in the US media of large numbers of injuries media came from NGOs that mostly affiliate with the opposition, but added that, given the violence seen in videos, including the throwing of molotov cocktails and the like, there probably have been injuries, but that would have to be confirmed by the country's health ministry later on.

Koerner said that Chavistas had rallied outside the Miraflores Palace by the thousands, "the traditional rallying point, recalling the April 11, 2002, coup, in which you saw, after some 47 hours, you had thousands and thousands of Chavistas coming down from the barrios to rally and demand the return of [Hugo] Chavez, who was kidnapped by the opposition. In fact, by many of the same opposition leaders like Leopoldo Lopez, who was just freed from jail."

"You've seen large crowds gathering for President Maduro and to defend Miraflores Palace, and likewise Diosdado Cabello, who is the president of the National Constituent Assembly, spoke to the amassed people there and called today ‘a popular victory,' that the people had mobilized and once again, just like on February 23, when the opposition attempted to force in this humanitarian aid as kind of a beachhead for overt foreign intervention in the country, that has been defeated by popular mobilization, by a significant portion of this population that continues to identify as Chavista, continues to defend its national sovereignty against US intervention."

Wednesday is May 1, International Workers' Day, a day of massive demonstrations by socialists and other leftists, including in Venezuela. Ironically, the right-wing Guaido called his expected march Wednesday "the largest march in history," Koerner said, noting that Guaido's failure to ever produce the numbers he claimed he could pull into the streets meant it "may result in further demobilization of the opposition."

Guaido issued a new statement in a video on Twitter in which he said, "Tomorrow we continue with the execution of the #OperaciónLibertad. We begin the final phase and we will be in a sustained way in the streets until we achieve the cessation of usurpation. Let's go with everything, with more strength and determination!"