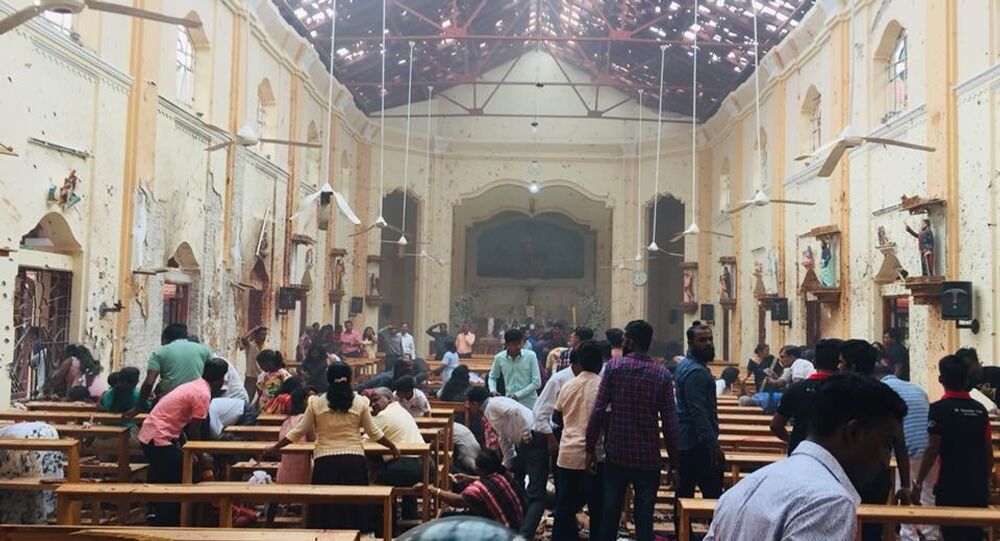 Despite the intelligence on the probability of terror attacks and their targets, Sri Lanka’s inability to prevent them has intrigued scholars in Russia and India. They observed that there is a need to study the development and impending dangers, while also trying to tackle another front of Daesh* terrorism.

New Delhi (Sputnik) — Defence analysts and scholars from Russia and India on Monday observed that Daesh targeting the island nation of Sri Lanka, after being rooted out from Syria and Iraq, holds major significance in various regards. They said that there is a need to understand that perhaps the target was the West and not Sri Lanka itself.

Participating in a video conference organised between New Delhi and Moscow on the subject "Tragedy in Sri Lanka: A New Origin of International Terrorism", panellists opined that the serial bomb attacks on churches and hotels across Sri Lanka must be seen as unprecedented, as they were carried out to send an ideological message to Christians in particular and the West in general that Islamic elements will undertake any mission designed for global propaganda effect and impact.

They said that the coordinated bombing that jolted the largely peaceful country on Easter Sunday, leaving 253 killed and over 500 others wounded, had all the markings of the involvement of Daesh, but they cautioned that it must be analysed as a new development within the existing framework of terrorism.

© REUTERS / Dinuka Liyanawatte
Sri Lanka Asks India to Send Anti-Terror Commandos After Easter Blasts - Report
Professor Boris Volkhonsky, associate professor at the Institute of Asian and African Studies at Moscow State University, said, "Sri Lanka is like a second homeland to me. I am really invested in that country. No one expected the Easter Sunday blasts. The Muslim community in Sri Lanka cannot be entirely blamed for the incident. As for the involvement of ISIS (Daesh), it is a new development in terms of its operations, its target etc. Sri Lanka has been peaceful and has just about recovered from a civil war that lasted nearly 20 years".

"I do believe that both external and internal factors were involved, but external factors were more prominent. These blasts in Sri Lanka were not a coincidence. They were designed for a propaganda effect and impact. What we have seen in Sri Lanka is different from what has happened in Iraq and Syria. There is quite a perverse logic behind this tragedy. The involvement of decent and affluent people is a surprising change", Professor Volkhonsky added.

Major General Dhruv Katoch (Retd.), director of the India Foundation, a Delhi-based security and strategic think tank, listed five key reasons for Daesh to select Sri Lanka as a place to attack. "ISIS (Daesh) has lost territory, not its ideology. Its ideology has not been defeated. The church was one target; in addition, the target was the West. On the one hand, these blasts reflect a battle of religion — Christians versus Muslims — and on the other, this incident has a civilizational context of West versus Islamic", Major General Katoch (Retd.) noted.

"This was simply a criminal and murderous attack. Attempts are being made to rationalise it, which I feel is wrong. The fourth point I want to make is on the issue of warning. We must understand that that Sri Lanka has enjoyed total peace for 10 years. The country and its government had become complacent and were saying, 'It cannot happen here'; well, it is when you think nothing is going to happen, that's when something does happen. Warnings were given, but were discarded", he said.

"The fifth and last point is that this is an ideological war, a clash of civilisations", Major General Katoch stressed further.

© Photo : Chandana Wickramaratne/facebook
Sri Lankan Leader Appoints New Acting Police Chief After Easter Sunday Attacks - Reports
Yuri Nagernyak, director general of the International Foundation for the Promotion of the Development of Culture told Sputnik, "We need to look at the root causes for terrorism. We need to examine the attacks in Sri Lanka holistically, see the common patterns. It is obvious that ISIS (Daesh) is not limiting its operations to the Middle East anymore. It is looking for creating maximum impact and publicity. Terrorists want to reach as many countries as possible. The attacks in Sri Lanka were carried out by people who logically should not have been part of such attacks".

Ajai Sahni, executive director of the Institute of Conflict Management in Delhi, told Sputnik, "The level of (advance) intelligence given by India to Sri Lanka was unprecedented, right down to the date of the attack, the intended targets, the timing etc., all this was given. This attack was possible and successful simply because of a collapse of the system, a collapse of the intelligence framework in Sri Lanka".

All the panellists were in agreement that ideologies have to be defeated to stop acts of violence from taking place and that terrorism must not only be fought and countered, but must also be dealt with.

The views and opinions expressed by the speakers in this article are those of the speakers and do not necessarily reflect the official position of Sputnik.