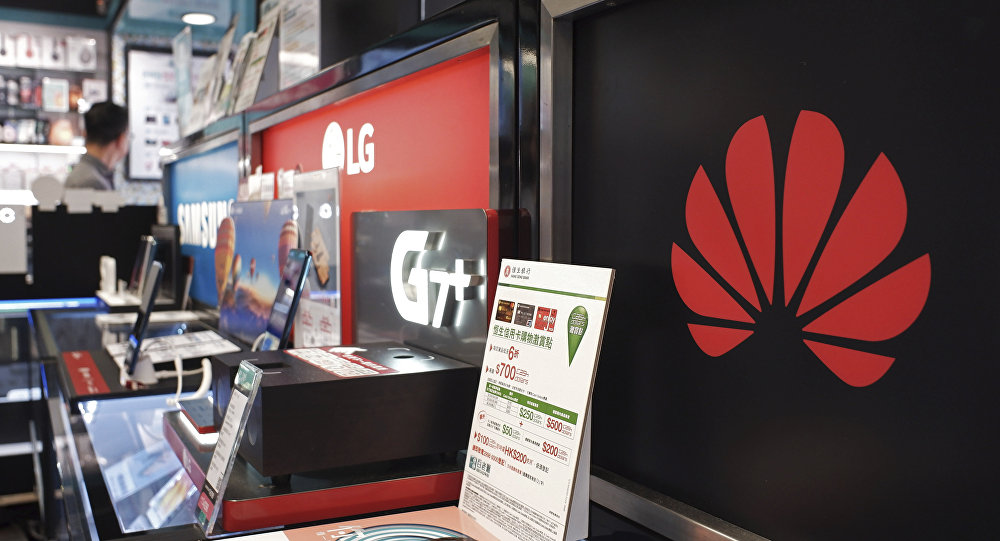 The UK has approved the use of Huawei products in defiance of American threats to halt intelligence cooperation and the Five Eye's concerns. Speaking to Sputnik, Chinese academic Zhu Feng has explained London's rationale and cast doubt on Washington's apparent plan to ban Huawei worldwide.

British Prime Minister Theresa May has given the green light to Huawei, a Chinese telecom giant, to build the country's 5G networks, disregarding Washington's warnings that the company allegedly poses a considerable security threat.

May's decision has triggered deep concerns within the Five Eyes, an anglophone intelligence alliance comprising Australia, Canada, New Zealand, the UK, and the US. On 24 April, Five Eyes heads met in Glasgow to discuss cyber threats. As The Telegraph noted, the Huawei issue was "the elephant in the room".

"We are not going to give them the loaded gun", said Rob Joyce, senior cyber security adviser to the US National Security Agency and a former adviser to Donald Trump.

© AP Photo / Kin Cheung
UK Launches Inquiry Into Disclosure of Confidential Talks About Huawei 5G Network - Reports
For her part, May argues that discrimination against a particular company harms the market's competitive environment, adding that Huawei would not gain control over Britain's critical infrastructure.

"The fact that the UK has allowed Huawei to take part in the creation of 5G networks is the result of an objective analysis of the situation. The West understands that there is no real reason to designate Huawei as a national security threat, as the US does", Zhu Feng, director of the Centre of International Studies at Nanjing University, told Sputnik China.

He highlighted that Huawei occupies a considerable market niche in the world: "So, to prohibit the company's products just because the United States considers it unsafe is not profitable to the UK", the Chinese academic suggested.

"[The UK] does not listen to the US' exhortations of threats, intending to build its 5G market on the principles of impartiality. This is reflected in the fact that the UK defends its position on the issues of Huawei and 5G", Zhu said.

© AP Photo / Andy Wong
US Working to Make Theresa May Backpedal on Huawei 5G Deal - Reports
The UK has long been cooperating with the telecom giant. To date, Huawei has created 1,500 jobs in the country, investing almost 2 billion pounds ($2.5 billion dollars). Meanwhile, the company has vowed to pour another 3 billion pounds ($3.8 billion) into the British economy over the next five years. Given the uncertainty triggered by Brexit, Huawei's investments come in handy for London.

According to Zhu, the US attempts to ban Huawei worldwide is not feasible. He suggested that other G7 countries may follow in the UK's footsteps. For instance, a considerable part of network infrastructure in Italy and Germany contain Huawei components, the academic pointed out, adding that the Chinese telecom giant holds a 31 percent share of the cellular infrastructure market in the world.

For comparison's sake, Ericsson, Huawei's major competitor holds only a 29 percent share, Zhu remarked. Therefore, according to the academic, Donald Trump's strategy to ban Huawei is doomed to failure.

"Could this affect US-UK relations? I do not think that the pressure will be strong", Zhu presumed. "Great Britain is the most important ally of the United States. Despite the fact that formally the Chinese company was allowed to participate in the creation of 5G networks, it is not yet known who will win the tender. Time will tell".

The Trump administration started exerting pressure on Huawei in 2018. The US banned the Chinese telecommunications giant from participating in government contracts, citing security concerns. Australia, Japan, and New Zealand followed suit. In addition, in December 2018, Huawei Technologies executive Meng Wanzhou was arrested in Canada, at the behest of US law enforcement officials.

© AP Photo / Mark Schiefelbein
CIA Accuses Huawei of Being Funded by Chinese Authorities - Reports
US intelligence officials sounded the alarm about the supposed collusion between the hi-tech giant and the Chinese secret services, something that the company vehemently denies.

On 20 April, The Times reported that Huawei was being funded by the Chinese People's Liberation Army, the National Security Commission, and a third branch of the Chinese state intelligence network, citing US intelligence officials.

The report came on the heels of US Secretary of State Mike Pompeo's warning that Washington may halt cooperation with some "important strategic partners" who use Huawei's telecom products in their network infrastructures.

While the UK has seemingly snubbed Washington's orders, it remains unclear whether the EU will obey Washington and ban Huawei. The European Commission has issued proposals to improve the security of next-generation networks. According to the recommendations, EU member states should analyse 5G networks by the end of June 2019, and by 1 October, the EU should work out a common security approach. This decision was welcomed by Huawei. The company said they are ready to work closely with all structures to comply with the EU's highest safety standards.

CIA Accuses Huawei of Being Funded by Chinese Authorities - Reports