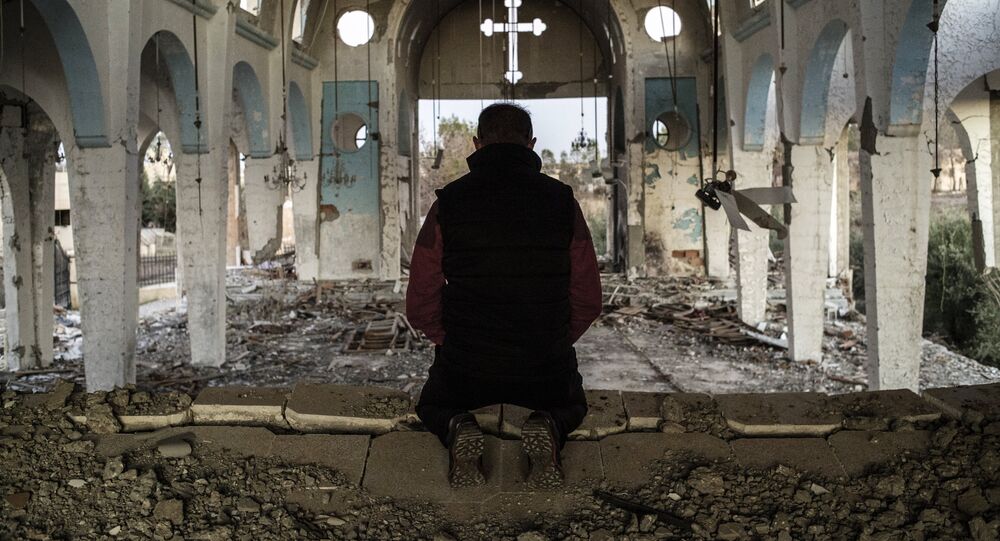 The Sri Lankan suicide bombing attacks have turned the spotlight on the problem of Christians facing persecution worldwide, including in Europe, analysts told Sputnik, stressing that the cases of discrimination and oppression remain largely neglected by politicians and media pundits.

On 21 April, a series of blasts shattered the peaceful island nation of Sri Lanka, claiming the lives of more than 300 people. The primary targets of the attacks were Christian churches and hotels, as local congregations were celebrating Easter Sunday, one of the most sacred holidays for Christian believers.

The Sri Lankan Christian minority is relatively small, constituting only 7.4 percent of the country's 21 million people.

Commenting on the attack in an op-ed for The Guardian, Giles Fraser, a parish priest in London, called Christianity "the most persecuted religion" and openly wondered why the issue is being silenced. Indeed, in 2018, Pew Research Centre's figures indicated that Christians remain the most oppressed religious group in the world.

'Christians are Targets Even in Countries Where They are Majority'

According to Philip Giraldi, a former CIA counter-terrorism specialist and military intelligence officer, there is more to the problem than meets the eye.

"Christians are targets in countries where they are minorities, including in places like Israel that claim the contrary, and they are also unprotected in many European countries that are nominally majority-Christian", Giraldi told Sputnik. "Governments in France, Germany and Scandinavia are generally hostile to Christianity, although they would not describe it in those terms."

© AP Photo / Chamila Karunarathne
Cui Bono? Analysts Explain Hidden Message Behind Sri Lankan Bloodbath
The CIA veteran opined that this was due to "the fact that state churches were once part of the conservative political order that prevailed in Europe through the nineteenth century".

However, currently, "Europe is post-Christian in terms of religious belief in general, with tiny congregations in the churches that still are open and operating", he opined, adding that "there is not a whole lot of sympathy for Christians and their interests are ignored".

On 5 June 2018, European Parliament members held a panel discussion on intolerance against Christians in Europe. Speaking at the gathering, Ellen Fantini of the Vienna-based Observatory on Intolerance and Discrimination against Christians in Europe pointed out over 2,200 cases of intolerance or discrimination recorded since 2006. The organisation's 2018 report shed light on more than 500 cases taking place in Europe in 2016 and 2017 alone.

"Along with brutal attacks on Christians and Christian buildings, monuments, and cemeteries, we have also seen Christian-run businesses financially ruined, Christians being forced to choose between their moral values and their professions, Christian student groups silenced on campuses, and overreaching governmental interference with parental rights," Fantini underscored.

'Christians Oppressed the Most in Places Attacked by US, NATO'

There is yet another peculiar phenomenon related to the problem of the persecution of Christians, said Adam Garrie, a geopolitical analyst and director of Eurasia Future.

He noted that while "Christianity historically has not been oppressed in Sri Lanka" it, surprisingly, had been the most oppressed "in places that the United States and its [NATO] colleagues have attacked".

© Sputnik / Julien Mattia
Notre Dame in Flames: Top 5 Other Shocking Fires at Christian Cathedrals
"Parts of the former Yugoslavia, including Kosovo, Libya, Iraq and parts of Syria under terrorist occupation are now some of the worst places on Earth for Christians, where prior to recent US and NATO attacks, this was certainly not the case", the geopolitical analyst underscored.

Following the NATO intervention in Yugoslavia in 1999, Serbia's UNESCO-recognised historic and spiritual heritage was subjected to outright destruction in Kosovo and Methohija. According to the International Centre for Transitional Justice, 155 Serbian Orthodox churches and monasteries were demolished by Kosovo Albanians between June 1999 and March 2004.

For its part, Aid to the Church in Need's report "Persecuted and Forgotten" on Christians oppressed for their faith between 2015 and 2017, sounded alarm about the exodus of Christians in Syria and Iraq and genocide committed by Daesh* against Middle Eastern congregations.

"Governments in the West and the UN failed to offer Christians in countries such as Iraq and Syria the emergency help they needed as genocide got underway," the report underscored.

'Religions Must Embrace Peace, Not Slaughter'

"By citing statistics from the past 2,000 years, one could make the argument that Christianity 'is the most persecuted religion'," McGregor stressed.

© Photo : St.Sebastian's Church,Katuwapitiya,Negombo,Sri Lanka.
Muslims in Sri Lanka Fear Retribution Following Attacks on Christian Churches
However, the journalist pointed out that "other religious believers have been slaughtered in large scales throughout history, such as Jews, Hindus, and even Muslims".

"Who is the 'most persecuted' is not such an important argument to make", he said. "What's more important is that religions must embrace peace, not slaughter. We have to encourage more dialogue and peace to resolve that".

Commenting on the Sri Lanka bloodbath and other cases of persecution of Christians by Islamist radicals, he opined that "we must treat so-called Islamist terrorists as criminals, not victims".

"They do not see themselves as victims, they just use the Islamophobia excuse to fool a gullible public and to prepare for more bloody crimes if they are set free from prisons," he noted.

Meanwhile, Daesh* has reportedly claimed responsibility for the Easter terrorist attacks in Sri Lanka. The country's authorities have urged the population to exercise caution, and are not ruling out the possibility of further attacks.