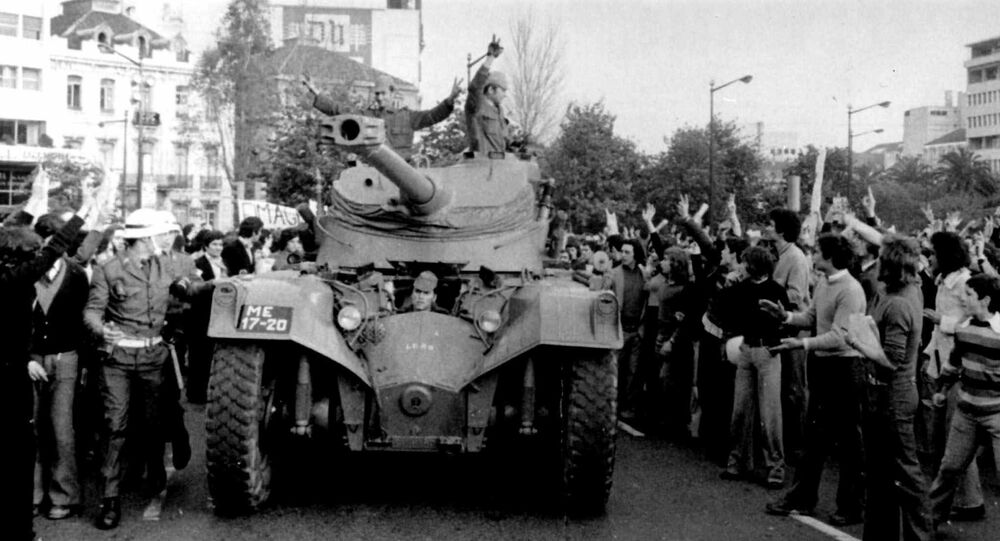 On 25 April, 1974 troops in Portugal launched a military coup which deposed dictator Marcelo Caetano, ended the Estado Novo (New State) and led to independence for Angola and Mozambique. Sputnik spoke to Jose Javier Olivas Osuna about the "Carnation Revolution".

Portugal will celebrate the 45th anniversary of the Carnation Revolution on Thursday, 25 April, an event which ended years of dictatorship, lowered the curtain on the 400-year-old Portuguese empire and eventually led to Lisbon joining the European Union.

Just after midday on 25 April 1974 a Portuguese radio station played a song, Grândola, Vila Morena, by Zeca Afonso, a folk singer whose music had been banned by the Estado Novo regime in the 1960s because of his alleged support for communism.

It was the secret signal for the plotters of the Movimento das Forças Armadas (MFA or Armed Forces Movement) to launch their coup against President Caetano and the Estado Novo regime.

'For those who want to overthrow the system that oppresses them, it helps to learn and remember and to be inspired by others who have tried to do the same.'

New blog on the people's history of the Carnation Revolution:https://t.co/HbOjOU2cYr pic.twitter.com/0Tnel6WTte

​When the rebellious troops took over the streets of Lisbon they were cheered by local women who put carnations in the barrels of their guns.

Jose Javier Olivas Osuna, a research fellow at the Department of Political Science and Administration at Uned in Madrid, said 25 April was not the first military conspiracy.

In December 1973 General Kaulza de Arriaga had plotted a right-wing coup, which was discovered before it could be launched.

"I don't believe in the inevitability of events or on a linear conception of history, but it is clear that Western powers would have kept on pushing for political reforms in Portugal. Moreover, as in the case of Spain, economic and socio-demographic changes were gradually opening Portugal. This means that there were certain inertias and structural changes ongoing and that the military acted as catalysts. The regime was also weakened and it was becoming increasingly difficult to silence discontent," Dr Olivas Osuna told Sputnik.

One of the main reasons the MFA overthrew Caetano — who fled into exile in Brazil, where he died six years later — was because of his refusal to countenance an end to the colonial wars which had claimed the lives of more than 8,000 Portuguese troops since 1961, not to mention around 100,000 African guerrillas and civilians.

The late Army General Antonio de Spinola then takes his oath as the 14th President of Portugal in May 15, 1974. In April 24, he staged a bloodless coup d'etat, with people's support, known as the Carnation Revolution, to oust the fascist authoritarian Estado Novo dictatorship pic.twitter.com/udl3isksRJ

​For 13 years Caetano and his predecessor António Salazar had insisted Portugal would not give up its colonies — Angola, Mozambique, Portuguese Guinea (later known as Guinea-Bissau) or the Cape Verde Islands.

"Salazar had worked hard to impose the idea that the overseas territories were not simply colonies but an integral part of Portugal. His famous slogan was ‘Portugal, do Minho a Timor' (from the river Minho — the northern border with Spain — to East Timor). For many people losing the colonies was like losing part of Portugal. It was also a source of pride and a reminder that Portugal was once one of the most powerful and innovative countries in the world," Dr Olivas Osuna told Sputnik.

France and Britain had given independence to most of their African colonies by this time but Portuguese conscripts were sent off to fight pointless wars against "freedom fighters" such as the MPLA in Angola and Frelimo in Mozambique.

"France or the UK remained international economic and military powers even after giving independence to their colonies. Portuguese territories had also belonged to Portugal for much longer than most colonies of other European powers (many of which had been in their possession for about a century)," Dr Olivas Osuna told Sputnik.

The Portuguese Army knew their mission was ultimately futile and their frustration contributed to their mutiny back home in April 1974.

Angola, Mozambique and Cape Verde became independent in 1975 while Guinea-Bissau's independence was recognised a year earlier.

Ironically when Portugal left East Timor in 1974 they were promptly replaced by another occupying power — Indonesia — which finally left in 1999.

"Although the Carnation Revolution brought to Portugal democracy, it is difficult to assess the level of success as different political actors had different plans in mind for Portugal. For instance many of the military who participated in the coup against the Estado Novo wanted to establish a socialist-style democracy and redistribute dramatically land ownership, others did not want to allow the colonies to get independence. Transition was quite convoluted with successive military plots and government instability. So for some more maximalist political actors the Carnation Revolution may be considered partially a ‘failure'. Most analysts recognise it as a key event in the history of Portugal which ended up opening a path to a pluralist democracy," Dr Olivas Osuna told Sputnik.

​[Tweet: "23 April 1936, the penal colony of the Tarrafal was created by the New State. In memory of the dead by the dictatorship and that, only after the 25th of April, they were able to return to their own: Francisco José Pereira: Sailor, 28 years old Pedro de Matos Filipe: discharger, 32 years old"]

One of the leaders of the MFA, Major Otelo Saraiva de Carvalho, was involved in another left-wing coup attempt in November 1975 and was briefly imprisoned but in 1976 stood for election, only to be soundly defeated by another former military man, General Antonio Ramalhao Eanes.

In the 1976 general election the Socialist Party won the most seats and its leader, Mário Soares, became prime minister.

The Spanish dictator Francisco Franco died in 1975 and democracy returned to neighbouring Spain.

Carvalho, now 82, remains sceptical about the modern Portugese state and has said it "needs a new MFA and a new 25th of April."

​Carvalho and many other MFA veterans have boycotted the Carnation Revolution commemorations in Lisbon in protest at the Portuguese government's austerity programme.

Salazar had created the Estado Novo in 1933 and it rested on the three pillars of the Catholic Church, the armed forces and the landowning classes.

"My impression is that those groups are comparatively speaking considerably less powerful than during the Estado Novo. Portugal is a country with inequalities and which can still make advances in political and economic areas, but it would be very difficult to argue that former pillars of the corporatist Estado Novo remain as powerful as they were back then. Media and other groups within civil society are much more powerful today than they were. And also political parties acquired power. Portugal has also become a very interesting and open country from a cultural and social standpoint," Dr Olivas Osuna told Sputnik.