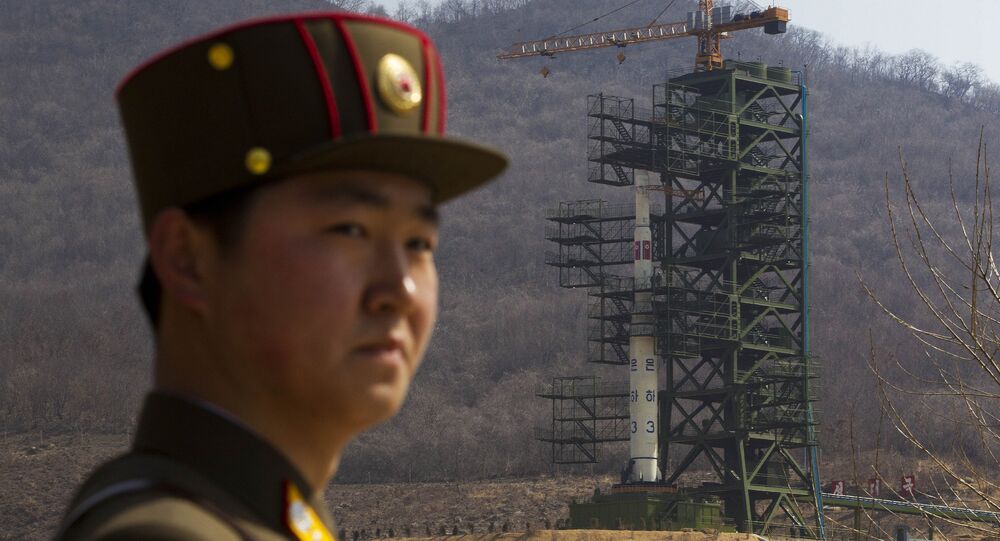 Reports about the presence of the North Korean leader at the testing of a new type of tactical guided weapon may appear to be an open demonstration by Pyongyang of its displeasure at the lack of progress in nuclear talks with the US.

By visiting military facilities, Kim Jong-un has over and over again seemed to signal to Washington that he is not going to abandon the “nuclear shield” — or so it would seem.

First one needs to understand what kind of weapon it is. After all, the "advanced tactical weapon" tests at the DPRK Academy of Defence Science were reported back in November last year — that's when Kim Jong-un personally became acquainted with the latest developments. However, at that time it was not characterised as "guided", so it is difficult to say whether it is a development of the same weapon.

Nevertheless, the new tactical guided weapon is described as having "a powerful warhead and a special system for flight control, tested during trial operations through various methods of firing at different targets", so this is hardly just a 300 mm multiple-launch rocket system (MLRS). Most likely, we are talking about new cruise missiles, said Kim Dong-yup, a professor at the Institute of Far Eastern Studies (IFES) based at Kyungnam University in Seoul.

"The above description suggests that the developed tactical guided weapon has the ability to fire at ground, surface, and air targets and, accordingly, can be launched from the ground, water, and air. Therefore, it is likely that this is not just a ‘surface-to-surface', ‘air-to-air' or ‘ship-to-surface' cruise missile, but a short-range missile that may have modifications of ‘surface-to-air', ‘air-to-ship', ‘anti-ship', etc. The line about ‘a special system for flight control and a powerful warhead' speaks of different flight paths of different types of missiles, depending on the location of the launch pad and the target, as well as the corresponding differences in the mass of the missile head", said the military expert, who previously worked in the South Korean Army.

© AP Photo / Wong Maye-E, File
North Korea Vows to Continue Military Buildup to Repel Possible Invasion
Cruise missiles have a short range of fire and limitations on the mass of the warhead, but very high accuracy due to guided targeting. The best-known analogue in this respect is the American Tomahawk missiles, which have modifications for air, ground, surface, and underwater deployment. South Korea also has similar missiles, called the "Hyunmoo-3", at its disposal.

"It is also important to note that if the ‘new type tactical guided weapons' which North Korea announced today is a cruise missile, then this has nothing to do with sanctions, because the current UN sanctions are aimed at ballistic missiles. Previously, South Korea also, in accordance with agreements with the United States in the missile sphere, cannot have ballistic missiles with a range of more than 180 km. Therefore, since the 1990s, in absolute secrecy, it began to develop cruise missiles with the help of Russian technical experts, which ultimately led to the development of ‘Hyunmoo-3' in our country", the professor said.

When asked why Pyongyang openly reported these weapons tests right now, most commentators, in his opinion, would answer that this is an attempt to show resilience to sanctions and willingness to follow their own path and put pressure on the United States. But that, of course, is only part of the story.

"Of course, there also exists this kind of motive, but in my opinion it is also an important internal signal for residents and the army. As yesterday's visit to the air force and air defence units, this is a demonstration of confidence in defence capability. On the contrary, this may indicate readiness for denuclearisation and a desire to acquire the deterrence forces necessary for minimal self-defence by selectively strengthening conventional weapons in a situation when there are no nuclear weapons. This is the specific North Korean defence reform and innovation in the field of defence. I'm not sure what's more here — my stance or analysis; but North Korea, in my opinion, is acting very carefully", the expert concluded.