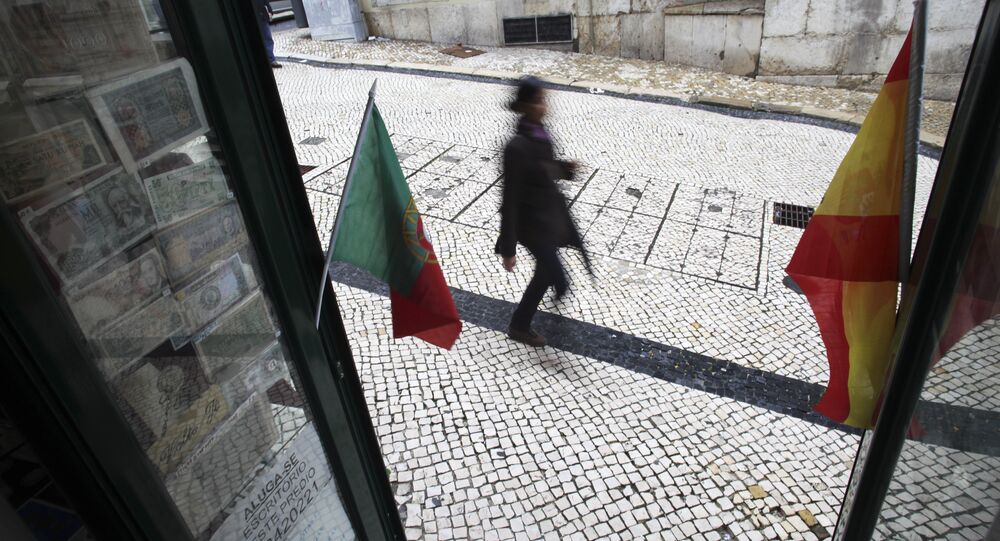 In 2019, the euro, the official currency of 19 EU countries, turns 20 years old. Portugal joined this project from the very beginning, abandoning monetary sovereignty and turning its national currency, the escudo, into a collector's item. Two decades later, experts point to the difficulties that now threaten the existence of a single currency.

Following discussions initiated as early as the 1960s, on 1 January 1999 the euro was introduced into non-cash circulation in eleven countries: Austria, Belgium, Finland, France, Germany, Ireland, Italy, Luxembourg, the Netherlands, Spain, and Portugal. At the initial exchange rate, one euro cost just over 200 escudos. When the euro was introduced, fairly steady economic growth was observed in Portugal. "It was a period when unemployment in Portugal fell to 4%, a period of great optimism and economic growth", economist Alexandre Abreu told Sputnik.

"The introduction of the euro should have made Portugal more modern 25 years after the restoration of democracy, at a time when Portugal was establishing itself as a European country, close to the most advanced ones", the economist explained.

Expectations have been realised from the very beginning.

"In the 1990s, especially in the early years of this decade, there were some fluctuations in average GDP growth but Portugal benefited from funding inflows, which allowed it to keep its economy relatively stable and growing", President of the Portuguese Chamber of Commerce and Industry (CCIP) Bruno Bobone told Sputnik.

© CC0
'Dollar Depreciation': Will Gold Replace Greenback as Global Reserve Currency?
I especially remember the deep conviction that we were opening a new chapter in our common history, a chapter that will determine the role of Europe in the world and the future of all its citizens. After 20 years, I am convinced that the signing of this treaty was the most important thing that I have ever done. The euro has become a symbol of unity, sovereignty and stability. It ensured the prosperity and protection of our citizens and we must ensure that the euro will continue doing it," European Commission President Jean-Claude Juncker said in a statement on the anniversary of the single currency.

Today, the euro is the second most-circulated currency in the world. According to the European Central Bank, the European currency was used in 39% of payments made in 2017 worldwide, second only to the dollar, which accounted for 40% of all payments.

The Other Side of the Coin

During these two decades, the countries that joined the eurozone have undergone a number of transformations, and not only economic ones.

"The introduction of a single currency in the eurozone allowed for a stable exchange rate, which led to lower interest rates, which, in turn, facilitated access to credit. The Portuguese economy was one of those that benefited most from this access. Moreover, with regard to the mobility of European citizens, the single currency has also undoubtedly been a gift. It promoted and in a certain way stimulated the movement and purchase of goods and services in all countries," Bruno Bobone said.

According to José Adelino Maltez, a professor in political science at the Technical University of Lisbon, the introduction of the euro was also a matter of survival for Portugal.
"Ultimately, we were not a large-enough country to walk alone in the process of globalisation", the professor commented to Sputnik.

However, experts recognise that Portugal may have been in too much of a hurry to join the eurozone.

"The country's weak preparation for the introduction of a single currency into circulation had a negative impact on price competitiveness, led to an increase in foreign debt and stagnation of economic growth, with consequences for public finances and social situation," Commerce Chamber President (CCIP) Bobone explained.

© Sputnik / Sergey Guneev
Maduro Asks Portugal to Unblock Over $1.7Bln of Venezuela Funds
According to Alexandre Abreu, "optimism at the thought that it is very important to join this European project did not take due account of the risks that arose. It was a challenging experience".

The economist explained that the euro brought with it competitiveness issues in southern European countries such as Portugal, Spain, and Greece. To implement a single currency, these economies depended on a more or less systematic devaluation of the exchange rate to calibrate the balance of payments.

"The escudo had been being devalued in order to strengthen the competitiveness of exports and, thus, maintain the trade balance and stimulate economic growth. From that moment on (the introduction of the euro), it was already impossible to establish the exchange rate ourselves; the euro quotation was set as an average value more or less suitable for different eurozone economies.

And since the rate was average, the euro was a very strong currency for such economies as, for example, Portugal and Spain, and very weak for Germany, the Netherlands, and more developed countries," Alexandre Abreu said.

© CC0
Spanish Economist REVEALS to Sputnik Consequences of Euro Introduction 20 Years Ago
The result of these steps was stagnation "and even with an aggravating factor", Abreu added. "In addition to the weaker-than-before economic growth in the last two decades, foreign debt has grown at an unrestrained pace.

This is at a time when the German economy is accumulating ever greater foreign funds. The euro, in its currently existing form, is not sustainable because it threatens the development prospects of peripheral countries and in its current form will lead to self-destruction if nothing is done".

According to Professor José Adelino Maltez, Portugal does not have a clear plan, and staying in the eurozone requires the government to support "manageability".

"The euro allowed us to survive in situations that could have a result, if there were a strategy, if everything in the country was well0organised. We are used to being manageable and to have modest goals. At the moment in Portugal, there are practically only two banks, all the others are foreign. Thus, in economic terms, we are completely dependent on the financial condition of both Europe and the region with which we are most closely connected, namely, with Spain and France. All major Portuguese parties belong to European parties. They have a European programme, there is no autonomy, and even no desire to have their own programmes", the professor said.

It is impossible for business professionals to imagine what the current scenario would have been like if Portugal had not entered the eurozone.

"We would be trapped between the sea and the continent to which we, to some extent, would no longer belong. It is impossible to know what the development and context of the Portuguese economy would be without the euro. However, based on data on changes in Portugal's GDP before and after the introduction of the euro, some studies show that, perhaps, without a single currency, Portugal's GDP growth could be higher in the 21st century. On the other hand, they also indicate that the international financial crisis would have had a stronger negative impact if Portugal were outside the eurozone", Bruno Bobone said.

Portuguese Finance Minister and Eurogroup President Mário Centeno acknowledged the uncertain future of the euro in his speech on the twentieth anniversary of the currency.

"The single currency has become one of the main successes of Europe. There is no doubt about its importance and its influence in the first two decades of its existence. But its future is still being determined, which confronts us with the problem of historical responsibility," he said during his speech.

The Minister believed that it will be necessary to make "constant efforts to reform, both in the period of favourable and unfavourable conditions".

"There is no doubt in our political will to strengthen the Economic and Monetary Union. We have to be prepared for what the future might bring, it is our duty to the citizens," Centeno said.