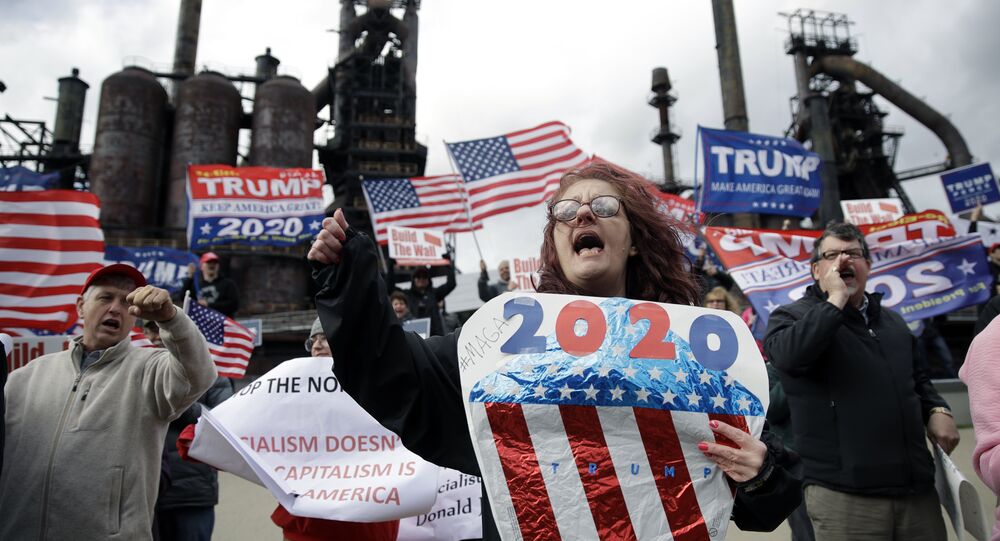 MOSCOW (Sputnik) - The publication of the Mueller report has once again dispelled the "Russia gate" invented by the US "deep state" to offset the defeat of Hillary Clinton through discrediting President Donald Trump and demonising Moscow, but both campaigns are unlikely to show any sign of abating ahead of the 2020 race, experts told Sputnik.

On Thursday, the US Justice Department released a redacted version of Special Counsel Robert Mueller’s report into Russia's alleged interference in the US 2016 election. The long-awaited document concluded that there was no evidence of any collusion between Russia and Trump or his team during the presidential campaign.

The report, however, failed to provide a definitive answer on whether the president obstructed justice but claimed that Russia did try to interfere in the US election on his behalf.

According to Tiberio Graziani, the chairman of Vision & Global Trends, International Institute for Global Analyses, the report, which found not a single piece of evidence of Russia-Trump collusion, "has restored the truth".

"It was obvious from the beginning that the Kremlin had not tried to influence the US elections. The deep state of the US wanted at all costs to hinder the eventual election of Trump to the presidency. With the hypothesis of a connection between [Russian President Vladimir] Putin and Trump, the Deep State wanted to seize two objectives: to discredit Trump and demonise, once again, Russia", Graziani told Sputnik.

The expert expects that the "deep state" will seek to further capitalise on the scandal amid the onset of the 2020 presidential campaign and, especially, Trump's re-election plans.

"I don't think that the so-called Russian-gate ends with the Mueller report. I believe, in fact, that this issue will act as a counterpoint — from today until the next elections — in the event that Trump will run for a second presidential term", he suggested.

© Sputnik / Vladimir Astapkovich
Dems Looking 'For Anything' to Justify Trump Impeachment - Ex-US State Dept Officer on Mueller Report
Gianmatteo Ferrari, a member of Italy's Lega party, similarly believes that the Russia probe was "a resounding forgery" meant to block Trump's activities, noting that "everyone knew that".

"But why do such a thing? Simple. Boycott Trump and relations between Russia and the United States. Who benefits? The usual lobbies and globalists who want to maintain tense relations between Moscow and Washington", Ferrari told Sputnik.

No Change in US-Russia Dialogue Expected

Even though the Mueller probe failed to find any evidence of Russia-Trump collusion, the whole scandal did yield certain fruits, according to Graziani, — namely, the atmosphere of distrust and confusion that the Trump administration would have to tackle in the years to come.

"It should be borne in mind that in terms of communication, those who used the so-called Russian-gate, however, obtained the result of having created a lot of confusion and, above all, a lot of distrust of large sections of the US population towards Trump. This distrust will be increased and used in the political struggle of the deep state against the Trump administration", Graziani said.

The expert, therefore, suggests that the report may "give Trump some breath," but only in the short term.

"Relations between Russia and the United States will not change much despite the Mueller report", he added.

Ferrari agrees that revelations that there was no Russia-Trump collusion are unlikely to bring about any quick improvement in the dialogue between Moscow and Washington.

"I'm afraid it won't affect relations between the United States and Russia very much. Now whatever the American president says or does is attacked. It's a shame because Trump wanted to decrease the tension between the two countries. I hope the situation can be better with the second term", he said.

© AP Photo / J. Scott Applewhite
‘So Obviously Bad Faith’: Dems Dismissive of Mueller Report They Once Hailed
The politician, however, is absolutely confident that neither Russia, which has been portrayed in the media and political rhetoric as "the bad nation" that brought to power "the ugly and bad" Trump instead of Clinton, nor the president himself should "expect an apology," obviously hinting that the discreditation is likely to continue.