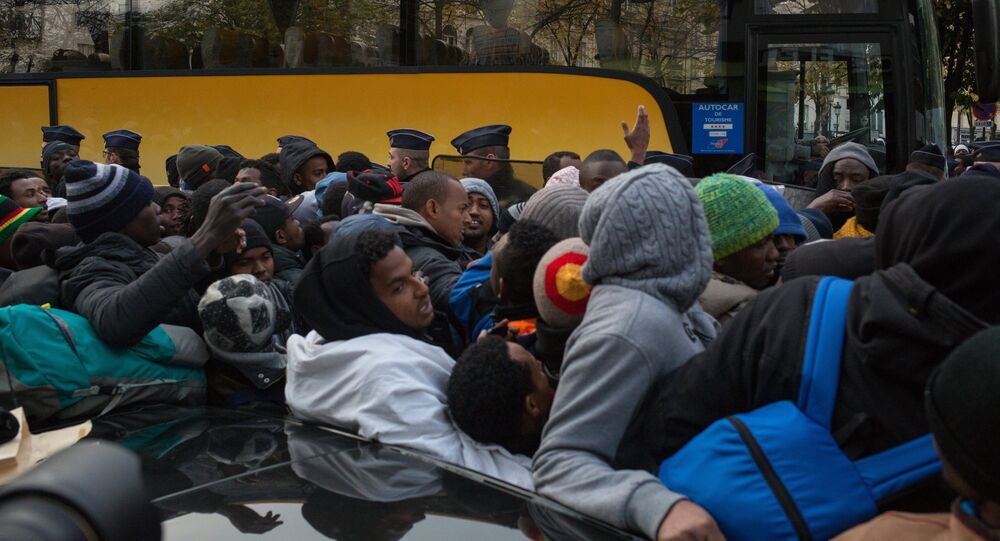 Swedish Prime Minister Stefan Lofven is pushing ahead with an open border policy, while right-wing parties across the EU are sounding alarm bells about the devastating consequences of uncontrolled migration. Speaking to Sputnik, Bill Ravotti, moderator of the V4 Report, explained how the rise of the New Right may alter the status quo in the bloc.

The Swedish government is up in arms about European nations which are reluctant to open their doors to the constant flow of migrants from the Middle East, North Africa and Central Asia. However, according to Bill Ravotti, moderator of the V4 Report, political analyst and republican nominee for US Congress 1996 and 1998, Stockholm's attitude should sound alarm bells for European nation-states.

"The entire so-called EU Project is a threat to the sovereignty and integrity of the European nation state, whether it's EU gun directives, forced migrant quotas or Article 7 procedures used as a political tool to try to alter and change national legislation," Ravotti told Sputnik.

"Hungary is one of the countries that gets the most. It is unacceptable that the country that received the most support from the EU said: 'No, we do not take responsibility for immigration'," Lofven stated in an interview with the daily newspaper Dagens Nyheter on 14 April.

© AFP 2020 / TT NEWS AGENCY / JANERIK HENRIKSSON
Rise of the Right in EU: 'People Don't Want to be Raped and Robbed' – Academic
Commenting on the issue, the analyst opined that "Lofven is a disaster".

"He is just trying to rally his far-left base in Sweden", Ravotti noted. "However, Germany, France and the West EU bloc will eventually try to link EU developmental funds to taking-in migrants. Of course, this is foolish and has been widely debunked by the V4 Report and others over the years."

The V4 Report moderator explained that "the structural funds or investments Visegrad receives from the EU started long before the migrant crisis and have nothing whatsoever to do with migration". According to him, "Western firms are the biggest beneficiaries (big profits) of these investments in Hungary."

"In other words, although not nearly as dramatic as the Marshall Plan, this EU 'subsidy' greatly benefits the donor countries in the long run. One does not hear many complaints from Western firms producing record profits located in the lands of Visegrad," Ravotti elaborated.

Referring to Lofven's expectations that the EU would be able to work out a common immigration policy, the analyst cast doubt on the possibility that a general immigration law, which would standardise an annual refugee quota, will be passed in the bloc's parliament.

"The elections will see the New Right of [Italian Deputy PM] Salvini, [Hungarian PM] Orban, the PiS [Poland's Law and Justice party] and the Freedom Party of Austria (FPO) soar", he predicted. "Regardless if they are in the same EU parties or not, they will work together on the 'core issues' (migration, sovereignty, strength of the nation state) to become an effective counterweight to Germany and France."

© AFP 2020 / OLIVIER MORIN
Work Yourselves Into the Grave: Ex-Swedish PM Ridiculed for Claiming Migration, Work to 75 Will Save Pensions
Still, he did not rule out that the Eurocrats would try with "various useless schemes, such as migrant quotas or trying to harmonise 'upwards' the benefits for migrants so a state like Hungary would be forced to offer the same rich benefits as Germany or Sweden".

"For obvious reasons, this will never work", Ravotti stressed.

Besides urging EU members to comply with refugee quotas, Brussels called upon European nation-states to sign the so-called UN Migration Compact in 2018. The non-binding document is aimed at legalising illegal immigration and regularising rapid, unsustainable, mass migration. However, as former UN expert Dr. Waheed Uddin noted in his December 2018 interview with Sputnik, the treaty interfered in nation-states' domestic affairs and posed a challenge to their sovereignty.

Austria, Slovakia, Hungary and several other European states have refused to sign the pact. According to Ravotti, the EU member states have started pursuing their own migration policies.

"We are already starting to see this with Bulgaria, Poland, the Czech Republic and others", he said. "In fact, eight of the twelve Central and Eastern Europe (CEE) nation states that comprise the Three Seas Initiative did not sign the UN Compact, which was a huge defeat for Berlin and Brussels.  And we also see new parties of the right emerging in Finland, Spain, Belgium and the Netherlands."

The Three Seas Initiative, also referred to as the Baltic, Adriatic, Black Sea Initiative, is a forum of twelve CEE countries within the EU.

According to the analyst, this is just the beginning, as the New Right movement is rapidly rising in the EU.

"The V4 Report believes the emerging New Right will be much different than the movements of the past, lead by [Marine] Le Pen, [Geert] Wilders and others, who did not possess the influence or firepower of a Salvini, Orban, PiS or FPO", he said.

© CC BY 2.0 / European People's Party
Orban: We Don't Want to Change Position on Migration, Christian Culture, EU Future
Ravotti suggested that the "Big Four" of Matteo Salvini, Viktor Orban, the PiS of Poland and the Freedom Party of Austria (FPO) "should be the cornerstones and main faces of this new alliance".

"All four carry much influence and are either leading or part of ruling coalitions, with Italy and Poland two of the bigger countries in the EU", he said. "Salvini and Orban are the most dynamic individual leaders, while Poland is an emerging economic and political force in Europe, which obviously has caused much angst in Berlin."

Referring to the upcoming May elections to the European Parliament, the analyst explained that the New Right would have to build "the foundation in order to grow the coalition into the largest or one of the two dominant groups in the Parliament 3-5 years down the road".

"These alliances will require time to build and strengthen", he foresees. "It may even require longer negotiations for the mentioned players to organise. Time is of the essence, but focusing on short term results only may diminish the long-term quality of the group".

© AFP 2020 / ANDREAS SOLARO
Italian Ports Will Remain Closed Due to Risk of Libyan Terrorist Presence on Migrant Boats - Salvini
Ravotti believes that the main battle "must be centred around those promoting the super-state in Brussels (Macron, Berlin, Verhofstadt, the EU Commission, etc.) versus the forces defending the European nation states (Salvini, Orban, PiS, FPO)". He stressed that never before the EU had faced "this type of powerful dynamic that we see gaining strength today".

"Ultimately, something will have to give [in], either the EU super-state as we know it or the European nation state", he pointed out. "We believe there will eventually be a split and the EU will be much smaller… maybe France, Germany, Spain, Portugal, the Benelux club and a few others of the West EU bloc.  Central-Eastern Europe and perhaps Italy will go their own way. The cultural differences are just too deep".