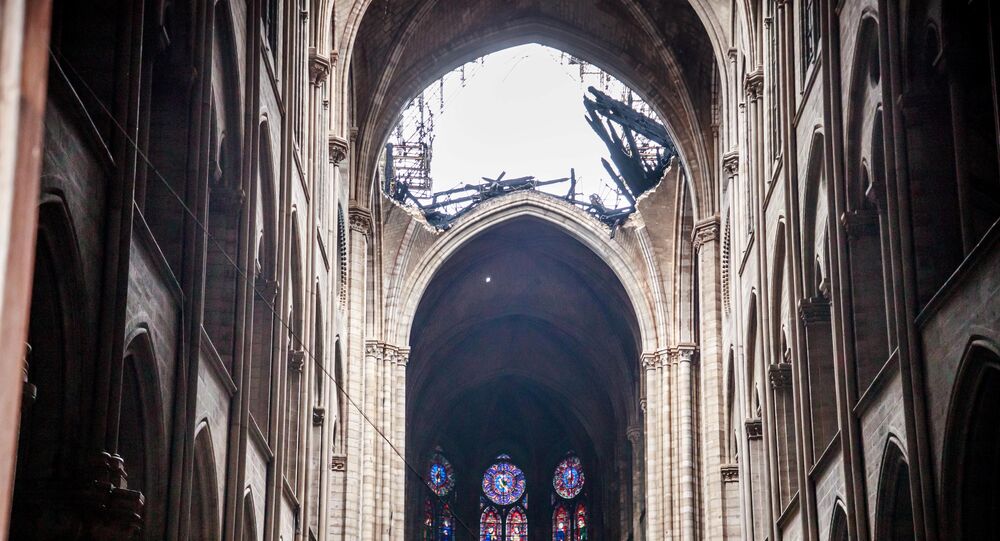 On 15 April, a fire erupted at the Notre Dame Cathedral, causing significant damage to the architectural pearl. Speaking to Sputnik, French historian Jean-Baptiste Noe shared his views on the tragedy and explained why the cathedral is of great importance for both the French and Christians.

The French government does not pay due attention to the preservation of historical monuments including churches, Jean-Baptiste Noe, an expert specialising in the history of Christianity, told Sputnik France, commenting on the iconic Notre Dame Cathedral catching fire on Monday.

"This is a serious problem", Noe said. "For example, Madeleine Church (l'église de la Madeleine) in Paris collapses before our eyes. The church of St. Augustine (l'église Saint-Augustin) was restored, but it was also falling apart. Stones fell on the sidewalk. Thus, the preservation of the French cultural heritage is a serious problem".

According to the historian this applies not only to the Notre Dame but both to rural churches and cathedrals.

"We do not deny that the restoration is very expensive. However, politicians are not eager to do this. There are still many historical monuments in poor condition".

© Sputnik /
VIEW Full Scope of Notre Dame DAMAGE After Fire With 360 Panoramic Image
On 15 April, a devastating fire erupted at the 856-year-old cathedral. It still remains unclear what started the blaze and how it spread quickly across the roof resulting in the collapse of the cathedral's famed spire. The fire was finally under control only on early Tuesday morning. According to the Île-de-France authorities, the fire was seemingly started by accident.

"First of all, it was completely unexpected", Noe said. "Restoration works were underway, we were happy with the prospect of renewal. And a few days later the building is in ruins and nearly completely destroyed".

The expert asserted that despite the fire had inflicted considerable damage to the building, it still can be entirely restored.

"For example, the Reims Cathedral (Cathédrale de Reims), which was completely destroyed during the First World War, was rebuilt, as was the Warsaw Cathedral. There are restoration masters, there are drawings, a lot of photos, everything was clearly documented, that is, it is certainly possible achieve full compliance [with the original]", he explained.

© REUTERS / Philippe Wojazer
Crown of Thorns, Other Priceless Relics Saved From Notre Dame Inferno
Noe highlighted that stained glass windows were also well described and documented, adding that there are stained glass artists who can restore them.

"Of course, these [stained-glass panels] will be copies, not originals, but you can restore them almost one to one", he remarked.

According to Noe, construction works at the cathedral never ceased: lots of work was done in the 19th century, while decorations and altars were made in 16th and 17th centuries. "Therefore the cathedral reflects the different styles of French architecture and painting", he explained.

The expert highlighted that the Notre Dame is of utmost importance for the French and Catholics in general.

"The Notre Dame is more than a Parisian cathedral, a French cathedral", he said. "There have been many historical events. The cathedral was erected in 13th century, but before that there was another building, destroyed in 13th century and a new building was built on the same place, that is, it reflects a thousand-and-half year history of France since the times of Clovis I".

He recalled that lots of important historical events took place on the island of Cite and in the Notre Dame: "Napoleon was crowned there, the bell of Notre Dame announced the liberation of Paris, and the wedding ceremony of princes and kings took place in the cathedral", Noe said. "The cathedral shared all the joyful and sad events in the history of France".