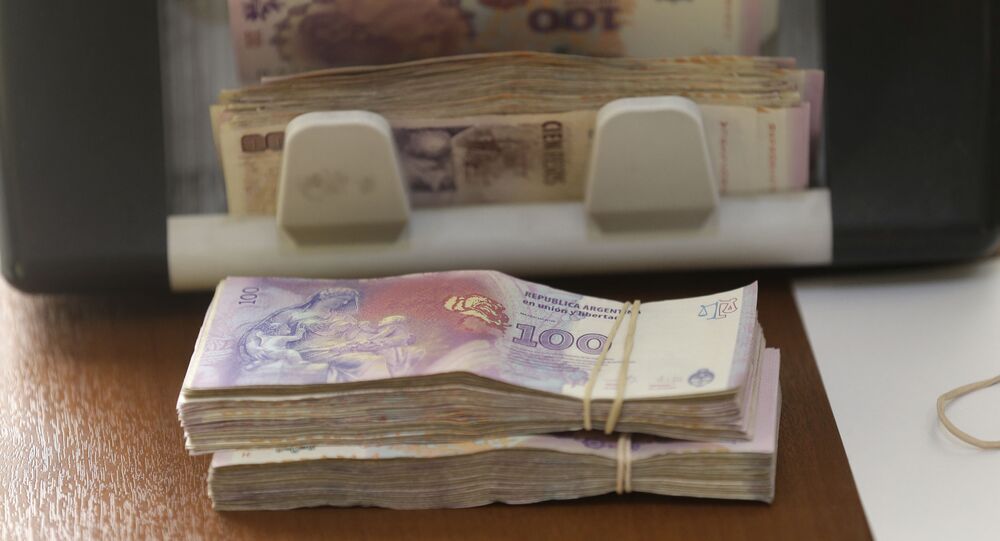 The Central Bank of Argentina is selling the dollars it borrowed from the International Monetary Fund (IMF) to replenish the nation's distressed budget. The ongoing currency crisis has nearly bankrupted Argentina yet again, while many households find themselves on the brink of survival.

Kristian Rouz – Argentina is continuing to sell its currency reserves to support its ailing national currency, with approval from the International Monetary Fund (IMF). The latest $60-million auctions took place on Monday amid reports the Argentine economy could shrink as much as six per cent this year.

The ongoing economic crisis in the country is the worst since the Global Recession of 2009, and it is seen as undermining President Mauricio Macri's chances of getting re-elected this year. Macri is set to face a tough challenge on election day, 29 October, as polls suggest he's already trailing his main rival and former President Cristina Fernandez de Kirchner.

On Monday, the Argentine central bank held two auctions of $30 million each, buying pesos at 41.55 and 41.65 per dollar. The nation is set to sell up to $9.6 bln to bolster its budget, with $60-million auctions taking place on a daily basis.

It is still unclear whether these IMF-approved measures will help improve Argentina's public finances and reverse the dramatic economic slump in the country.

“The objective of these auctions is to provide pesos needed for government spending denominated in local currency,” the Argentine Treasury said in a statement.

The auctions come after the Argentine economy shrank 6.2 per cent year-on-year in the first quarter of 2019, its worst since 2009. Last year, the nation's GDP contracted 2.5 per cent, while the unemployment rate rose to 9.1 per cent amid sweeping closures of businesses and manufacturing facilities across all sectors of the national economy.

The central bank's latest currency auctions come after the Macri government secured a $56-billion assistance programme from the IMF last year. As part of the agreement, Macri had to implement austerity measures, which include cuts to budget spending on social welfare programmes, as well as governmental investment in the economy.

These measures damaged Macri's approval ratings, which currently stand at just 35 per cent. Meanwhile, Kirchner is viewed more favourably by the Argentine public, polls suggest, not least due to her handling of the debt default back in 2014, which did not entail a dramatic deterioration of living conditions for most Argentinians.

The IMF, however, continues to pour money into the Argentine economy, as analysts expect the nation could return to GDP growth as soon as in the second quarter of this year.

However, a return to better macroeconomic figures doesn't necessarily mean immediate improvements in disposable incomes as a restoration of Argentine households’ purchasing power to its pre-crisis levels. Aftereffects of last year's currency crisis could cripple the Argentine economy for years, experts say.

“Tight monetary policy is an impediment to growth in the short-term but benefits outweigh the costs,” Ilya Gofshteyn of New York-based Standard Chartered Bank said. Argentina is in “dire straits on the growth front and it’s not going to turn around overnight.”

Additionally, Argentina is facing high levels of inflation, which spiralled out of control after last year's crash of the peso. Argentina is still reliant on the imports of a wide selection of consumer goods, and some say living standards of the majority of the Argentinians could never fully recover.

“The Macri government has been a total failure,” Hector Méndez, president of the Argentine Industrial Union (UIA), said. “The manufacturing sector was better off with the previous government. I regret having voted for him. In a way, I was an accomplice to his victory. Now I look at the state of the country and I get depressed: we are an economic and political disaster, it’s as if we had no future.”

In this vein, Kirschner has embarked on an aggressive campaign against Macri, who, in turn, has accused her of corruption and abuse of authority while in office.

Political tensions in Argentina are gradually escalating as the nation is bracing for this year's electoral season. It’s yet to be seen whether Macri, who is supported by the US, is able to restore the confidence of Argentine voters in his ability to improve their daily lives and make up for the ongoing crisis.

*Views and opinions expressed in this article are those of the expert and do not necessarily reflect those of Sputnik.