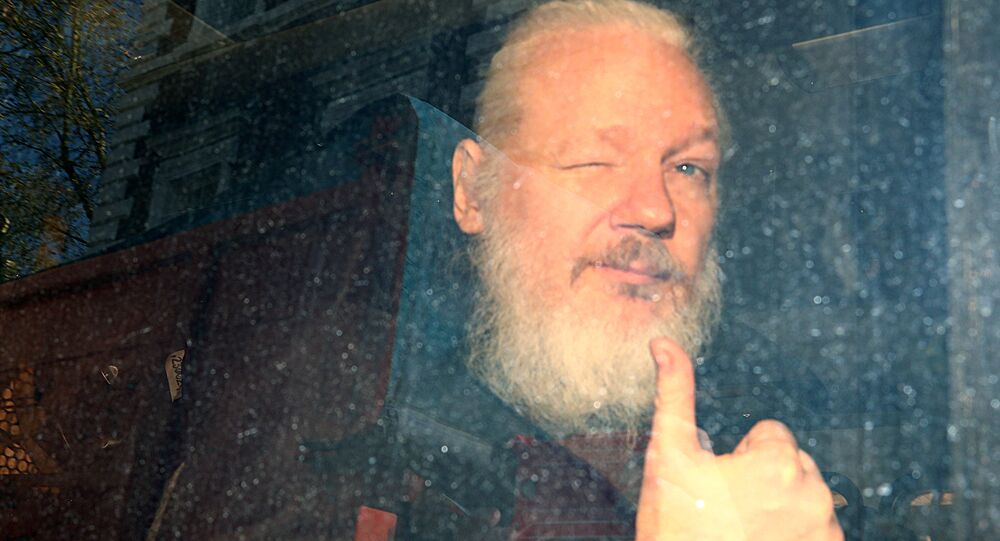 WASHINGTON (Sputnik) - If the Trump administration achieves its goal of prosecuting WikiLeaks founder Julian Assange in US court, the decision and later appeals could actually destroy main parts of the 1917 Espionage Act, intelligence analysts told Sputnik.

Already, the US government’s initiative of bringing charges of conspiracy to try and jail a whistleblower should be mind-boggling to the rest of the journalistic world, especially those in the United States, the analysts also cautioned.

Assange was arrested in the Ecuadorean Embassy in London on Thursday and was later charged with jumping bail in Westminster Magistrate's Court. The charge is expected to be used as the basis for extraditing him back to the United States where far more serious charges can be thrown at him.

If the US government does go after Assange using the full power of the 1917 Espionage Act, their efforts could backfire on them, undermining the legislation that is the main legal tool against spying in their arsenal, veteran Defense Department analyst and retired US Air Force Lt. Col. Karen Kwiatkowski said.

“If a US court case against Assange occurs, the decision and later appeals could actually destroy main parts of the Espionage Act, and much like parts of the Patriot Act, can be found unconstitutional”, Kwiatkowski said. “Very likely, the US government values the threat and power of the Espionage Act more than using it to try and convict Assange”.

© AFP 2021 / Justin Tallis
UK Guarantees on Assange's Potential Extradition Insufficient - Ex-Ecuadorian Foreign Minister
Kwiatkowski pointed out that Assange had proven to be an effective and innovative whistleblower and enabler of whistleblowers, and he had made WikiLeaks a journalistic organization that both competed with and served alongside other mainstream journalistic and news organizations.

Therefore, "The United States bringing charges of conspiracy to assist a whistleblower should be mind-boggling to the rest of the journalistic world, especially those in the United States", Kwiatkowski said.

According to constitutional lawyer Jonathan Adler, the language of the Espionage Act is so sweeping that it could be open to challenge on the grounds of conflicting with major principles in the US Constitution and Bill of Rights.

"He [Adler] believes that this language is incredibly broad and, if applied as written, raises serious First Amendment concerns", Kwiatkowski said.

Although not a US citizen, Assange should be entitled to all the liberties and protections afforded a US citizen, Kwiatkowski also said.

“The first ten amendments of the Constitution apply to everyone impacted by US law, and thus illegal aliens and foreigners swept up into the US court system are entitled to those guarantees: From free speech, the right to a legal defense, the right to remain silent, to not be tortured or suffer cruel or unusual punishment", Kwiatkowski said.

In order to bypass the US Constitution and its Amendments, Presidents George W. Bush and Barack Obama had used the US military law system instead, Kwiatkowski explained.

“This is why the rendition programs under Bush and Obama utilized military tribunals and military court systems, which are purely executive branch legal tools, with their own extra-constitutional rules and procedures", she said.

Assange was not a US citizen, does not have a US security clearance, did not violate any agreement with the United States and he routinely revealed information provided to him by people around the world, Kwiatkowski recalled.

“Prosecuting Assange is new territory, and government prosecutors are very risk-adverse”, she said.

The presumption, widely reported but not proven, that 2010 WikiLeaks data dumps relating to US Afghanistan operations caused the Taliban to hunt down and kill US informants, may be used in court to add urgency or legitimacy to possible charges against Assange, Kwiatkowski observed.

© Sputnik / Alex McNaughton
Diplomatic Dramas: Assange 'Siege' Joins the List of Crises Involving Embassies
“It is ironic that the safety of non-US citizens killed in civil wars in their own country will be held up as reason to prosecute a non-US citizen, specifically a journalist, for things he simply reported outside of the United States jurisdiction", she said.

Assange ought to be afforded the same protections as a news organization, Kwiatkowski insisted.

The animosity of the US mainstream media against Assange and WikiLeaks revealed more about the nature of modern information flow and their own narrow and shrinking audience and hence advertising earnings, Kwiatkowski advised.

READ MORE: 'I Know Nothing': Trump Distances Himself from WikiLeaks After Assange Arrest

"The case against Assange and the lead up to his trial in the US if he is extradited from the United Kingdom, will be played out in the media so that Assange is not publicly seen as a whistleblower, and also not seen as a leader of a news organization, and likely he will be portrayed as a criminal person in advance of the trial", Kwiatkowski said.

Retired CIA analyst Ray McGovern, a member of Veteran Intelligence Professionals for Sanity, added that there was no evidence to support claims that Assange's whistleblowing activities had directly led to the killing of Afghan informants.

© AP Photo / olores Ochoa
Fake Facebook Founder Seeks Ecuadorian Asylum Day After Assange's Arrest – Report
"No evidence of that. Secretary of Defense [Robert] Gates wrote to [then-Senate Armed Forces Committee] Chairman Carl Levin, admitting that the hype was hype and that the charges that people had been hurt or killed were in Gates's words 'significantly overwrought'", McGovern said.

Assange is charged with conspiracy to help former US Army intelligence analyst Chelsea Manning break into a computer and steal classified documents and could face five years in prison.