Friends and global counterparts of China's military will not be influenced if US warships do not participate in China's international parade of ships in late April.

The US will lose another opportunity to get to know the Chinese Navy, Chinese experts said on Monday after media reports signaled that the US will not send any of its warships to the naval review.

The Trump administration has blocked US naval ships and officers from taking part in China's multinational naval parade, which is to be held to celebrate the 70th anniversary of the founding of the Chinese People's Liberation Army (PLA) Navy on April 23 in Qingdao, East China's Shandong Province, although the PLA has sent an invitation, US media outlet the Washington Free Beacon reported last week. 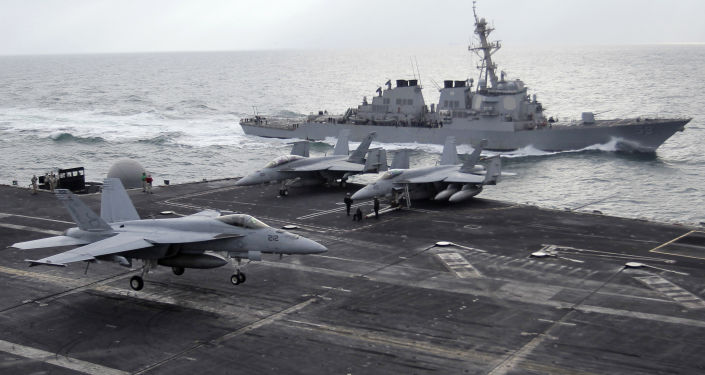 © AP Photo / Hassan Ammar, File
Modern US Fleet to Fail in Battle Against Russian, Chinese Navy, US Think Tank Says
The non-presence of the US will not affect the friendships and trust built by the PLA Navy and its counterparts around the world, an insider who asked not to be named told the Global Times, noting the naval celebrations have been widely and well received by international society.

Naval leaders from dozens of countries plan to attend and multiple countries will send warships for the international fleet review, including naval powers from five continents, the insider said.

More than 60 countries will send delegations, according to information released by China's Ministry of National Defense in late March. Japan, the Philippines, India, South Korea, France and Russia will reportedly send ships.

Ni Feng, deputy director of the Chinese Academy of Social Sciences' Institute of American Studies, told the Global Times on Monday that while the US sent vessels to China for the celebration parade 10 years ago, the Chinese military has significantly developed over the years and the US now sees China as a strategic competitor, so it is unwilling to lend support to the Chinese military this time.

In April 2009, US Navy sent missile destroyer USS Fitzgerald to Qingdao to attend an international fleet review to celebrate the 60th anniversary of the founding of the PLA Navy.

US Navy / Chris Oxley
US Navy Creates Aggressor Training Unit to Mimic Russian, Chinese Submarines
The military relations between the two countries will remain to be a stabilizer for the two countries' overall relations when it comes to keeping military conflict in check, but that does not mean the US military will support the Chinese military especially as it sees the latter grow stronger, Ni said.

Chinese analysts said it's not surprising that the US declined China's invitation, as it is in line with the US military's policy on China of recent years.

The Washington Free Beacon report also said China's invitation was aimed at using the presence of US warships to bolster its international standing, and the US motive for not participating in the Chinese parade could get US allies to cancel their plans to take part.

A Chinese expert who also asked not to be named told the Global Times that it is ridiculous to say the presence of US warships could bolster China's international influence, because China has done that on its own through international cooperation and communication.

© Sputnik / Maksim Blinov
Mock-Up of Russian-Made T-90 Tank Allegedly Spotted During Chinese Military Drill (PHOTO)
The expert noted that "Military exchanges will benefit both sides as they will boost understanding and prevent misjudgments. By reducing interaction with China, the US is eliminating opportunities to get to know the Chinese Navy."

If the US Department of State does block US warships from joining the Chinese parade, China will not be surprised as some people in the US still maintain a faulty Cold War mentality that sees China as an imaginary enemy. This ossified way of thinking is harmful to China-US relations, said the expert.

This article was originally published in Global Times. Views and opinions expressed in this article are those of the speakers and do not necessarily reflect those of Sputnik.