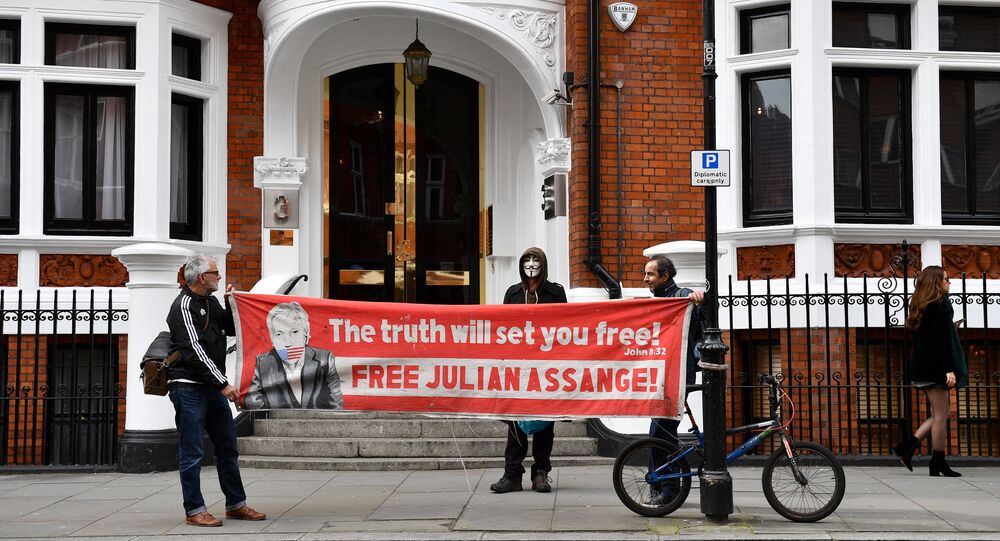 WikiLeaks revealed Wednesday that its founder Julian Assange has been subjected to extensive surveillance during his time at the Ecuadorian embassy in London.

​In a press conference in London Wednesday, WikiLeaks Editor-in-Chief Kristinn Hrafnsson revealed that WikiLeaks has "uncovered an extensive spying operation against Julian Assange within the Ecuadorian embassy."

​Assange is currently residing in the embassy to hide from British authorities that could arrest him for breaching bail conditions from when he was the subject of rape allegations in Sweden. Assange and his team of lawyers believe that if he is arrested, he could later be extradited to the US to face prosecution there, Sputnik previously reported. The case against the WikiLeaks founder has been ongoing for nine years, as US prosecutors have been attempting to determine whether Assange's actions fall under the Computer Fraud and Abuse Act or the Espionage Act.

According to Hrafnsson, surveillance of Assange included video and audio recordings of him, his lawyers and even his doctors inside the embassy.

"It has been confirmed that he's [Assange] under massive surveillance, constant surveillance, including when he's meeting with his lawyers and when he is being examined by his doctors," Lauria told host Brian Becker.

"In fact, a legal document that was briefly left behind in a conference room had been copied by someone. And all of this material, thousands of gigabytes, were put together in a file. [According to Hrafnsson], these people had possession of all the surveillance and [said] that if WikiLeaks wanted it, they would have to turn over 3 million euros," Lauria explained.

According to Hrafnsson, the unidentified individuals who gained access to a "massive trove" of surveillance information threatened to publish it unless they were paid 3 million euros. Hrafnsson also called the surveillance a "total invasion of privacy."

"So, Hrafnsson went down to Spain to meet with them [the individuals with access to the surveillance information], and he secretly taped them, and he was able to get enough information to know they were trying to extort him," Lauria explained.

"He [Hrafnsson] then went to the Spanish police… they obtained more evidence and [started] a formal investigation into these three guys or several guys, we don't know how many, and now an investigative judge in Spain has taken over the operation. The first part, that Assange has been surveilled like that, is not a surprise. What is surprising is that his lawyers and his doctors were also filmed," Lauria added.

"What's really curious is: how did this trove of material get into the hands of these alleged extortionists in Spain? Someone from within the embassy or from another government that had access to all of this material clearly turned it over to these guys, unless they hacked this information, which is hard to believe. So, there is a lot of unanswered questions here, but the surveillance is confirmed," Lauria said, also noting that no arrests have been announced yet.

According to Lauria, it is difficult to speculate how the extortionists gained access to the surveillance material.

"I wouldn't want to speculate… Fidel Narváez, who was the former Ecuadorian consul at the embassy and calls himself a friend of Assange — he speculated that someone in the Ecuadorian government turned it over to get 3 million euros. Assange himself has accused the FBI of being behind the surveillance or having access to it. The [US National Security Agency] NSA would have access to it, that's for sure. Why anyone in the US government would give it to extortioners in Spain doesn't make any sense to me, unless someone can tell me otherwise. It's got to be someone other than the US government, someone who's desperate for money," Lauria added, also noting that mainstream media is trying to push their "political agenda" and claim that Assange deserves to be surveilled because his website leaks classified information.

Last week, ​Ecuadorian President Lenin Moreno blamed Assange for recent allegations of corruption within his administration, accusing WikiLeaks of intercepting his phone calls and private conversations, and he insinuated during comments to the Ecuadorian Radio Broadcaster's Association that Assange had played a role in the circulation of "photos of my bedroom, what I eat, and how my wife and daughters and friends dance" on social media, Sputnik previously reported. WikiLeaks warned on April 4 that Assange could be expelled from the Ecuadorian Embassy in London within "hours to days" by Moreno, citing "a high level source within the Ecuadorian state."

"The Ecuadorian government gave political asylum [to Assange] and this is a decision of the state, not the elected government… and that, under international law, means he's supposed to have freedom of movement and freedom of speech and cannot be, most importantly, returned to a country where he can be persecuted. That is strictly forbidden under international law. His situation, maybe in some ways, has improved [now], because he now has absolute proof he's been surveilled illegally," Lauria told Sputnik.

© Sputnik
Attack on Free Press: Expulsion of Assange from Embassy May Be Imminent

According to Lauria, Democratic and liberal media outlets don't consider Assange a journalist.

"They just think he's a source, basically. They just think he dumps material and that he doesn't use judgment and discernment of a journalist to interpret that information. And that's not true. He doesn't just dump stuff. He understands what he's doing. Plus, WikiLeaks vets everything it publishes to make sure it's correct… he's doing the same thing which he has always done, which is publishing material, whether it is favorable or not, to whoever," Lauria added.

LEAKED: Assange Told Ecuador Court He Was an 'Assassination Risk'