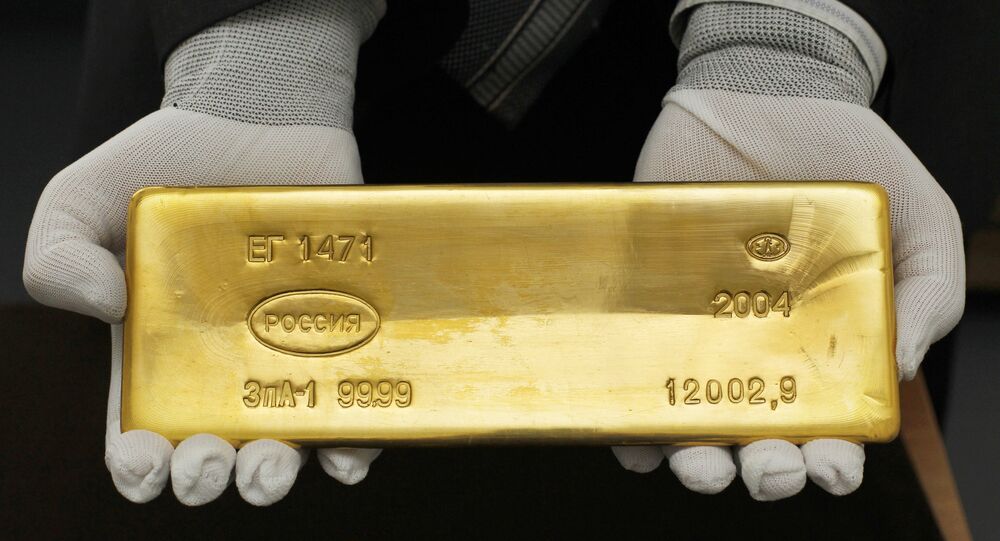 The current fiat money system that originates from 1973 may be replaced by digitalised commodity-based currencies in the future, Marc Friedrich, a German economist and bestselling author, told Sputnik, predicting that China may play first fiddle in the establishment of the new order.

With the US dollar and euro steadily losing their purchasing power over the past decades, people are turning to monetary systems backed by precious metals or commodities, says Marc Friedrich, a German economist and bestselling author.

"Unbacked [fiat] money systems have always had the tendency to fail", Friedrich told Sputnik Germany. "We can see that now, after the dollar has lost 80 per cent in purchasing power since 1971. The situation is no better for other currencies with the euro having lost a third of its purchasing power since its introduction. People are more inclined to backed currencies."

© AFP 2021 / ANDREAS SOLARO
Italian Gov’t Prepares to Snatch Control of Gold From EU-Led Central Bank
Up until 1973 the international monetary system was backed by gold. However, in 1971, then-US President Richard Nixon severed the link between the dollar and gold, introducing a "floating" exchange rate in 1973.

Thus, the 1944 Bretton Woods system of international financial exchange based on the gold-backed dollar was replaced by a new regime based on freely floating fiat currencies. Since then, the purchasing power of individual currencies has declined.

It appears that change is in the air as the Italian Il Sole 24 Ore newspaper, one of the most popular economic publications in the country, wrote on 25 February that the "gold standard" would make a comeback on 26 March. However, this has not happened yet.

Commenting on this, Friedrich presumed that the publication had received insider information.

"They probably got insider information that the Basel-based Bank of International Settlement (BIS) which is in essence 'the central bank of central banks', was introducing an accounting algorithm in which gold as well as silver and other precious metals were equated with low-risk investments such as government bonds, and also to money. That's true", the economist noted.

© Sputnik / Павел Лисицын
Russia’s Gold and Forex Reserves Climb to Record High Amid Bullion-Buying Spree
However, he added that if one looks at the BIS documents, one would see that a rule will be introduced on 1 January 2022 allowing central banks to hold up to 20 per cent of their deposits in gold, silver, and even platinum in order to stabilise their balance sheets.

Still, the author cast doubt on the probability of the introduction of a full-fledged "gold standard" on 1 January 2022. Nevertheless, he believes that it will be a step in the right direction. It will also show that after the 2008 financial crisis, central banks were accumulating reserves in precious metals in an "acyclic" manner, according to the economist.

"The Chinese, Russian, Iranian, but also European central banks are actively buying gold because they no longer trust the fiat paper money system, and gold, in their opinion is the last resort. The precious metal's amount is limited by nature. Gold has always been money, and will always remain money. And in the future, thanks to the Basel 3 agreement, it will become a security to stabilise the balance. This clearly shows that nations are preparing for new crises and if necessary for the creation of a backed money system one day".

© Sputnik / Pavel Lisitzin
Gold Extends Gains Amid Weaker Dollar, Higher Oil Prices
According to Friedrich, the current monetary system is doomed to fail as people are losing confidence in fiat currencies. In order to regain this trust a new system must be established, according to the economist.

"My favourite is a commodity-based money system. The next monetary system will no longer be based on paper currency, it will be digital. In my opinion, China will play a leading role in it", he predicted.

Meanwhile, international gold prices climbed one-week high on 8 April amid the US dollar's slowdown. Earlier, on 1 April, Russia's gold and forex reserves broke a five-year record hitting the 487.8 billion dollar mark. For its part, China boosted its reserves of the precious metal for the fourth straight month in March, according to the People's Bank of China (PBoC). Currently, Russia and China hold the fifth- and the sixth-largest gold reserves, respectively.