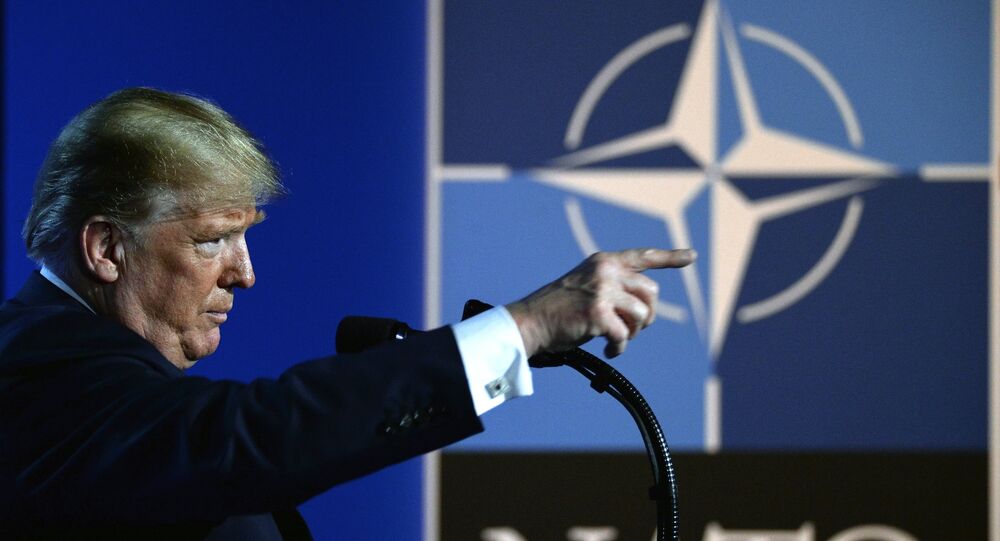 Recently US President Donald Trump noted that his strategy of pressuring NATO members to increase their defence spending is leading to tens of billions of dollars more in contributions, yet it is still not enough. Sputnik spoke about it with Sauer Tom, professor in international politics at the University of Antwerp, Belgium.

Sputnik: How could you account for US rhetoric of pressure towards its NATO allies?

© AFP 2021 / Saul Loeb
NATO Members Discuss Russian Military Staff Visit to Venezuela – Pompeo
Professor Tom Sauer: President Trump, backed by his base and by many of my colleagues in the US, points out that NATO is an unfair deal: the US is spending a lot of money to defend Europe, and the Europeans are free-riding. To a certain extent, this is true. That said, the Europeans alone do spend 250 bn $ on defence every year, which is 4 times more than Russia. Whether all this money is spent efficiently is another question. In addition, it is not so that the entire US defence budget (700 bn $) goes to the defence of Europe, only a small part. More fundamentally, it is also in the US interest to stay in Europe (e.g. military bases). In short, the US is acting less altruistic than it seems at first sight, and Trump's rhetoric (by definition) does only reveal part of reality.

Sputnik: Why is DC reproaching Berlin over a Nord Stream 2 that is supposedly not connected to the military alliance?

Professor Tom Sauer: The US does not like the German-Russian Nord Stream 2 project, and this for two reasons: first of all because it reduces the chances to sell US gas to Germany, while Trump's overall goal is improving the US economy and bringing jobs to his base. Secondly, because the US regards Russia as an enemy since Russia's invasion of the Crimea in 2014. As NATO is a politico-military alliance and not only a military alliance, it is not abnormal that energy issues show up in the debate.

Sputnik: Is it wise to pressure Ankara over the missile defence issue?

© REUTERS / Joshua Roberts
Ex-US Intel Analyst EXPLAINS Why US Chooses Bullying Tactic With its NATO Allies
Professor Tom Sauer: Another ‘difficult' ally, in the eyes of the Americans, is Turkey. The possible purchase of the Russian missile defence system by Turkey is only a symptom of the worsening relations between Washington and Ankara. Furthermore, coercive diplomacy by the US may backfire. The Russian-Turkish relations may become even more strengthened, although both countries have also different interests, e.g. in Syria. Whether Turkey will go as far as closing the Incirlik Air Base (where US tactical nuclear weapons are based) is uncertain.

Sputnik: How much is the US rhetoric undermining the Alliance?

Professor Tom Sauer: The US rhetoric — and now were are basically talking about Mr Trump — is definitely undermining the future of the Alliance. Trump's rhetoric and gestures signal a complete disrespect for Europe, especially those that are doing better economically speaking. NATO has always been a very hierarchical organization with one dominant actor (the US) and the rest (European states and Canada). As long as there was a common enemy during the Cold War, that inequality was accepted by both parties. With the end of the Cold War and the implosion of the USSR and the Warsaw Pact, internal frictions inside the Alliance became more to the forefront. That is also the reason why alliances normally halt to exist after the threat has gone.

Sputnik: What is the remaining purpose of NATO?

© Sputnik / Natalia Seliverstova
Untold Story of Moscow's Efforts to End Rivalry Once and For All by Joining NATO
Professor Tom Sauer: As already stated, it is bizarre that NATO remained into existence after the Cold War. Realists cannot explain it as they see alliances as short-term defence cooperation mechanisms. They do not believe in long-term structural cooperation agreements between states. After the Cold War, NATO had to find other enemies, as alliances by definition ‘need' them to justify their own existence. If you look very carefully, you always find new enemies: proliferators, terrorists, etc.

It is a pity that NATO was not transformed after the Cold War from a collective defence organization (or alliance) into a collective security organization that included Russia. Many highly respected American observers like George Kennan, Paul Nitze, Gen. John Galvin, and Charles Kupchan warned already in the 1990s for future problems with Russia in case NATO would not be fundamentally transformed. This was a gigantic missed opportunity by the West. Worse, NATO has expanded into the direction of Russia, despite having (orally) promised not to do so, and installed missile defence systems in the Central European states "against Iran". Add military frictions in the Balkans as well as unilateral military interventions in Kosovo (1999) and Iraq (2003). All that explains why President Putin probably gave up his belief in cooperation with the West at a certain point in time, probably around 2003.

Although entirely illegal and therefore not legitimate, the occupation of the Crimea and the resulting deterioration in the relationship between Russia and the West should be seen through these glasses. The West is certainly to be blamed. That said, if Russia and the West like to improve the relationship again and may start thinking about a new security architecture in Europe, it will require a much less confrontational policy and more constructive ideas by Russia as well.