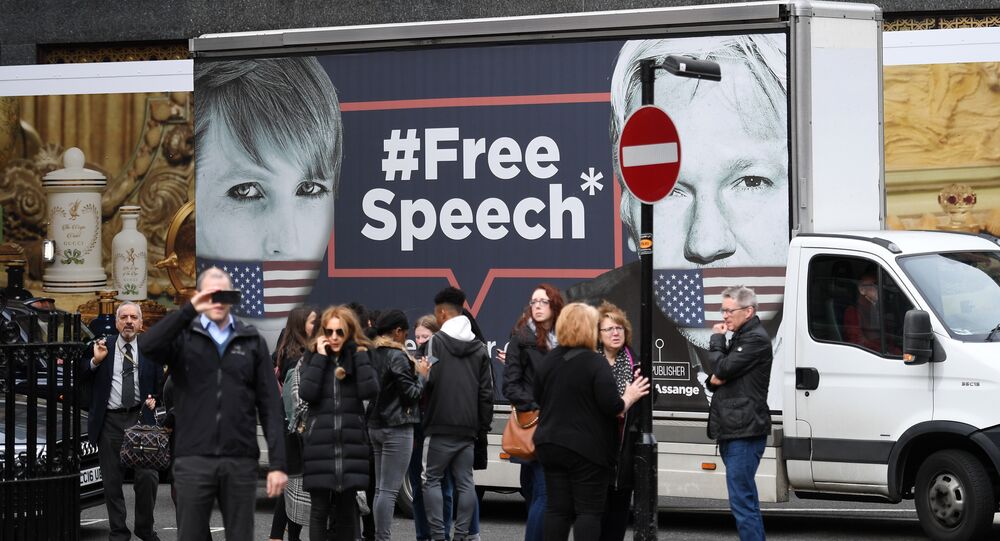 Demonstrators gathered in front of the Ecuadorian Embassy in London on Friday to protest WikiLeaks founder Julian Assange's possible expulsion and arrest by Metropolitan Police, following a secret agreement struck between the Lenin Moreno administration and the UK, according to a tweet released on Thursday night.

Assange, who has remained at the embassy for over seven years since fleeing charges of sexual assault by Swedish authorities.

Whilst the charges of rape have been dropped against Assange, he remains confined at the Ecuadorian embassy in Knightsbridge on fears that he could be extradited to the US over espionage charges linked to his operations with WikiLeaks.

What's the Fate of Julian Assange?

A campaigner for WISE Up Action, a UK grassroots solidarity network for Chelsea Manning and Julian Assange, told Sputnik that the background on Mr Assange's case was "highly politicised".

"Since Ecuadorian President Lenin Moreno took over the government, Moreno has been in negotiations for Assange's expulsion and it's been going on for several months now," the campaigner said. "Moreno has been under fire ever since a corruption case was opened against him, so he's deflecting and scared about the possibility of new information being released."

"Any violations against Julian Assange and WikiLeaks are false", the campaigner added. "WikiLeaks has not published any information about Mr Moreno, but he's using that to his advantage".

The campaigner also noted that Julian Assange was a political asylee and that the United Nations Working Group on Arbitrary Detention had "looked at his case in great detail, which is important as the UK government should respect international law and release him".

© Sputnik / Alex MacNaughton
Assange's Supporters Rally Near Ecuadorian Embassy in UK as He Reportedly Faces Expulsion (VIDEO)
She added that the Moreno government had been trying to expel Assange from the embassy and end his political asylum. "But what's behind this is his administration's rapprochement with the US government, which has held a WikiLeaks grand jury for many months now who are investigating his publications dating back to 2010".

"They have imprisoned the alleged source of those leaks, Chelsea Manning, and are attempting to coerce her into testifying against Assange, in order to levy espionage charges against him"

Another demonstrator told Sputnik that she did not have any thoughts on Assange's expulsion because "we neither know if he's going or staying".

READ MORE: Chelsea Manning Moved Out of Solitary Confinement After Nearly a Month

The Ecuadorian authorities told WikiLeaks that they would expel Assange "within a matter of hours or days", but the Ecuadorian Embassy later denounced those as just "fallacies and rumours", the protestor said. "Who knows what's going on here?"

"But it's not good to toy with asylum rights in the way that they're doing", the protestor added. "There are serious repercussions for doing so, because those rights have been hard fought for, and to bend them to your will is a very dangerous thing".