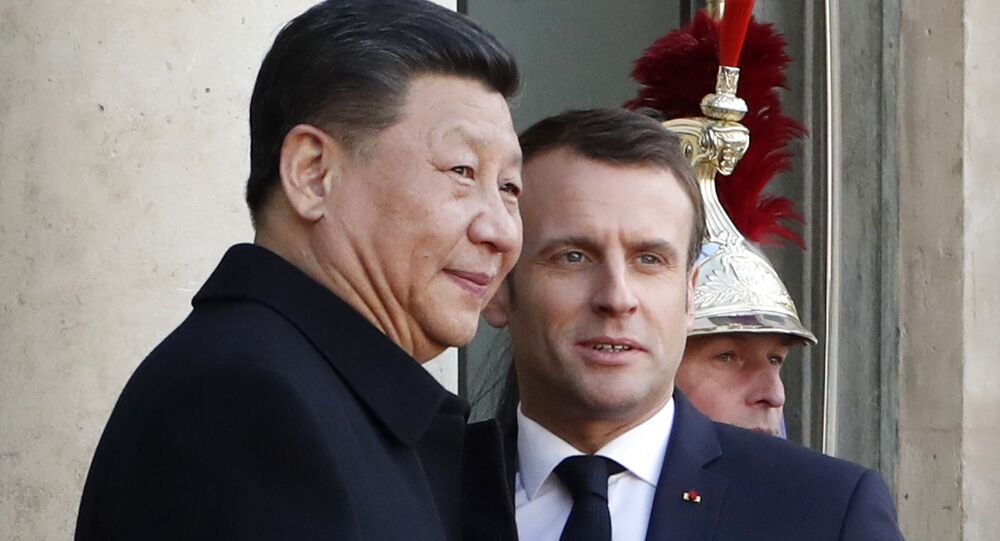 Two-Faced Janus: Is Macron Snubbing US by Boosting Sino-French Ties?

The upcoming European Parliament elections which are due to take place from 23-26 May have prompted French President Macron to double down on rallying support for his political force, Karel Vereycken, a French journalist and vice-president of the Solidarity and Progress Party, told Sputnik.

With Angela Merkel preparing to step down as the German chancellor, French President Emmanuel Macron is continuing to push ahead with his bid to become the new leader of Europe. However, this road is obviously not without bumps.

On 4 March, Macron outlined his vision of a "renewed" Europe amid simmering Brexit and unabated Yellow Vests protests in France.

The French president proposed creating a EU central budget to fund innovation, provide social security for all workers across Europe, and step up defence spending, among other issues.

"Freedom, protection and progress. We need to build European renewal on these pillars", Macron wrote.

Speaking to Sputnik, Karel Vereycken, a French journalist and vice-president of the Solidarity and Progress Party, opined that "for Macron, the proposed steps of increased European integration, is nothing more than his chosen propaganda angle to rally support for his forces during the European elections and his own second eventual mandate".

Berlin's response to Macron's plan was not long in coming.

© AFP 2020 / Ludovic MARIN
Macron Drumming up Support for New EU Foreign Investement Rules - Market Researcher
"After long months of silence and vague promises, after Macron's speech at the Sorbonne, after the encounter at Meseberg, after the signature of the treaty of Aix-la-Chapelle and after his March 4 letter to the Europeans, he got a brutal answer from Germany on March 9, not from Merkel, but from her announced successor, CDU chairwoman Annegret Kramp-Karrenbauer with her text 'Getting Europe Right'," the politician noted.

Kramp-Karrenbauer made it clear that what Macron was calling for, namely, "European centralism, European statism, the communitarisation of debts, the Europeanisation of social systems, and the minimum wage", would be "the wrong approach".

According to Vereycken, for the CDU chairwoman, "it is out of question for Germany to 'pay' for the others (via a banking union)" because, as she put it, "The first priority is to safeguard the foundations of our prosperity".

Meanwhile, Macron's approval ratings continue to fluctuate around the 30 per cent mark at home amid Yellow Vests demonstrations which have been taking place for 20 weeks since 17 November 2018.

The protesters put forward a list of demands, including a substantial cap on taxes and increase in basic pension and social welfare. Furthermore, they are calling for the French president's to step down.

"The Yellow Vests, despite the vicious media campaigns to discredit them, remain quite popular. Macron's refusal to take into account their demands and the paradigm they represent cannot but accelerate his downfall", Vereycken suggested.

© Sputnik / Julien Mattia
Macron Doing 'Increasingly Boring' One Man Show, Desperately Trying to 'Take Steam Out' of Yellow Vests – Politician
Commenting on media reports which describe the latest reshuffle in the Macron government with two ministers resigning, the French politician noted that "while some of those leaving the government are happy to jump from what they consider a sinking ship, the replacements are all handpicked among his closest advisors, including 'technical' advisors".

"It is not really a sign of strength that a president's spin-doctor becomes the spokesperson for his government", Vereycken opined, referring to the appointment of Sibeth Ndiaye, Macron's Senegalese-born media advisor, as government spokeswoman.

Macron Tries to Scare the French With Brexit

Likewise, the French president's efforts to demonise Brexit do not seem successful, according to the journalist.

"Macron, in line with the EU Commission, is on the hard line against the UK", he explained. "Brussels fear is that if the UK gets a favorable situation by leaving alone, others could follow its example".

© CC0
Scholar on Brexit: UK Divisions Are Just as Deep as They Were 3 Years Ago
According to Vereycken, "to prevent that, Brussels is ready to sacrifice billions and the UK's people".

"[For his part], Macron wants to scare the French with the Brexit: you see what happens when you leave the EU! 'Vote for me' is the final message", the French journalist elaborated.

The politician believes that "the only solution would be a group of countries, recognising the reality that the EU and the euro are 'a failed experience', would decide, by common agreement, to announce that the 'EU is dissolved'."

Meanwhile, on 2 April, British MPs yet again failed to reach common ground on the alternatives to the Brexit deal proposed by Prime Minister Theresa May, which was "overwhelmingly rejected" earlier.

"After a disgusting media campaign warning against the yellow peril and China's supposed quest for world domination via its Belt and Road Initiative, a worldwide ambitious infrastructure program, Macron and the EU showed quite some openness to cooperation", the politician underscored.

© AP Photo / Thibault Camus
France, China Reaffirm Commitment to JCPOA, DPRK Denuclearization - Macron
He pointed out that although the EU, France and Germany, who first accused China of "dividing" the EU and even dubbed Beijing the bloc's "systemic rival", "showed in the same time eagerness to rebuff US unilateralism by consolidating EU-China cooperation on security matters in Africa, climate change, the Iran nuclear agreement and the denuclearisation of the Korean Peninsula".

While Italy broke the ice by signing a memorandum of understanding with China in support of Beijing's Belt and Road Initiative (BRI), "the deals between France and China, both economically and financially, are quite substantial", the journalist emphasised.

"Cooperation in space exploration between the French CNES and China is another marker of far reaching mutual trust. And without US pressure, the long standing Franco-Chinese cooperation in the nuclear field would flourish even more", Vereycken elaborated.

© AP Photo / Andy Wong
EU States Embracing China's Silk Road, Nord Stream 2, Defying US – Journo
He added that "the fact that China worked out agreements to bolster its financial operations in Luxembourg — while London is in the Brexit turmoil — also indicates Germany and Belgium, who dominate the Luxembourg financial market, are on board".

According to the politician, "this is the right way to go"; by redefining international cooperation and creating a new anti-speculative international monetary system the European states "can lay the foundations of the new security architecture for peace and nuclear disarmament called for by Russia, China and other BRICS members and to which a Trump administration, cleaned from its war party elements (Pence, Bolton, Pompeo), could be recruited."

"From that higher standpoint, we should 'dissolve' the current EU and Eurozone, and allow Europe to contribute with the best of its culture and genius", he concluded.

Bombs Found on Corsica Ahead of Macron’s Visit – Reports