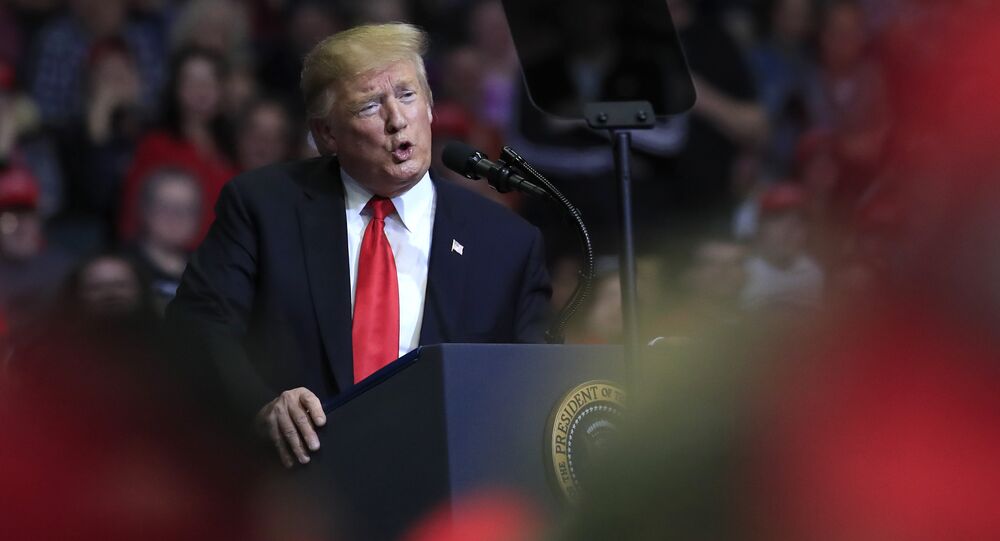 US President Donald Trump has once again denounced the investigation into his campaign that was conducted by Special Counsel Robert Mueller. He has claimed that the investigation was really an effort to overturn the results of the 2016 election.

Earlier, Donald Trump labelled the Mueller investigation "an attempted takeover of the US government". Speaking to FOX News, Trump said that if the Republican Party had done this to President Obama, they would have 100 people in jail right now and it would be considered treason. However, President Trump evaded a question on possible pardons for his former associates. 34 people were charged during the course of the investigation. He said that he doesn't want to talk about pardons "right now", adding that the investigation was "sad on so many levels".

Sputnik discussed the investigation into President Trump with Jim Hoft, writer, speaker and the founder of the Gateway Pundit website.

Sputnik: Ever since the probe started, the mainstream media have been eager to promote the idea of Trump's collusion with Russia. Why do you think that was the case? I mean, this is really unprecedented to have this kind of an investigation into any president, isn't it?

Jim Hoft: Oh, absolutely. I think it was even before this president was elected that they were out to get him. I think we are going to find out a lot more about what actually happened in the coming weeks. At the Gateway Pundit, the website that I run, we are in the middle of the country, we are pretty much Trump country. So, we have a different perspective than you might get from the coast, the West Coast or the East Coast. [There is] Huge Trump support out here, and we always saw it as, Trump described it as a ‘witch hunt'.

© REUTERS / Larry Downing
Mueller Report Should Be Released to Congress Without Redactions - Nadler
It certainly looked that way. Certainly, with the reporting we put up for the past two years, we were very doubtful that they had anything. They never showed that they had anything. All of these screaming headlines that they would put out in the mainstream media, would come out about 24 hours later to be a nothingburger, to be something that just didn't show anything after you looked at it.

We were pretty…I think Trump's kept his support out here in the Midwest, and it was just outlandish what we saw going on. And I hope… Some Conservatives, some Republicans are saying that Trump needs to move on, but I think his base, his base of support here in Middle America, they want him to proceed and find out what exactly happened so that this doesn't happen again to another future president.

Sputnik: The thing is that Trump, of course, is not out of hot water yet. The report did not exonerate him and there are still issues regarding the obstruction of justice, which I think will be left up to Congress to decide.

Wikimedia Commons / Gage Skidmore
Team Trump Ignites Social Media With ‘WITCH HUNT’ Merch
Jim Hoft: I don't think most people are worried about that. I think as the results settled in, as people got to look at this report, the Mueller report, when it was released on Sunday, to most people it was just a thorough victory for President Trump. They are not going to find anymore, I don't think, collusion. And they are not going to find anything else. As far as most people are concerned there, they believe that the investigation is over. We do understand, Americans do understand: there are probes that are continuing in New York State but I think most Americans have accepted that this was just nothing more than a way to attack the president and to bring him down. And certainly, we have never seen anything like this in America, as you know.

Sputnik: But it seems that more than half of Americans, to this day, regardless of the fact that the preliminary report came out, they still believe that Donald Trump was, in fact, working with Russia to influence the 2016 presidential elections. That is [according to] a Reuters/Ipsos poll that was published on Tuesday. And 53 per cent of respondents also said that Donald Trump tried to stop investigations into Russian influence on his administration. How can you explain that? What do you think is behind that?

© AP Photo / J. Scott Applewhite
‘A Complete Outrage': House Intel Chief Pushed Russiagate ‘With No Regard for Truth'
Jim Hoft: You know I think I have seen a couple of other polls. Rasmussen had a poll that said over 60 percent of American voters wanted Congress to move on and not to waste their time with these silly investigations against the president. So there are a lot of different opinions there. I think after two years of having the mainstream media, and I would say that is at least 90 percent of the media outlets pounding this, there are a lot of people who may believe it but the facts are the facts. There was no collusion. Trump doesn't have a lot of business interest in Russia, despite the facts that they tried to make out some phantom hotel in Moscow.

It was never built; there was never a contract on it, anything like that. They tried to make that a part of the picture. I think they stressed everywhere they could to make this man look guilty. And I just disagree that there was anything there to start with. And I think as this settles and as more information comes out on the people who were actually spying on Trump and setting up his campaign officials, I think Americans are going to be outraged.

Sputnik: Do you think that releasing a full report would help change the view of those Americans who continue to believe?

Jim Hoft: Well, you know, that is a great question. But what they are not telling you is the fact that with an investigation like this, if you have innocent people who have been questioned, brought in… As Rush Limbaugh, a famous radio host in America, said: "This was the largest awful research investigation ever on any candidate". And I agree with Rush; they brought in so many people who were peripheral to Trump campaign and questioned them and got a lot of information. I don't think the public has a right to harass these people anymore.

© AP Photo / Carolyn Kaster
Republican Congressmen Request US House Intel Committee Chairman Schiff to Resign
I think the Mueller probe harassed a lot of people, cost them a lot of money, bankrupted some people, and put some people in jail, who never would have been in jail, except for the fact that they were questioned by these very eager attorneys to find anything to indict this administration. So, I just think that some of that information does not need to be public. And I think Democrats know this. They know that there is information that by law cannot be released.

When you have innocent people, you don't release and you don't smear their names in public. I don't think we will ever see the full report but I think it is a good political talking point for the Democrats because then they can make people still question if there still might be something there when we all know that there was nothing there to begin with.

Sputnik: Why do you have doubts that we will see the full report? I think the American people kind of deserved to see the full report, minus some very sensitive, perhaps, personal details that should be reviewed and perhaps deleted. But don't you think after two years of waiting, after all of the money and effort that was put into this that it should be released?

© Sputnik / Vladimir Astapkovich
Trump Says Mueller Probe Was ‘Attempted Takeover of Government’
Jim Hoft: Again, I don't want to see innocent people harassed anymore. I have some friends who were actually investigated by this probe. I know they spent a lot of money. One of the individuals who was interviewed by the Mueller investigation, he's a writer. Again, I don't think there is anything to hide there because I don't think any of these people had direct relations with Russian operatives.

I do know that there is information there for some of these people who on a Trump campaign actually were set up by the US and set up by Great Britain and some of their intelligence operatives that way. I don't think it is going to reveal anything about Russia.

The views expressed in this article are solely those of Jim Hoft and do not necessarily reflect the official position of Sputnik.