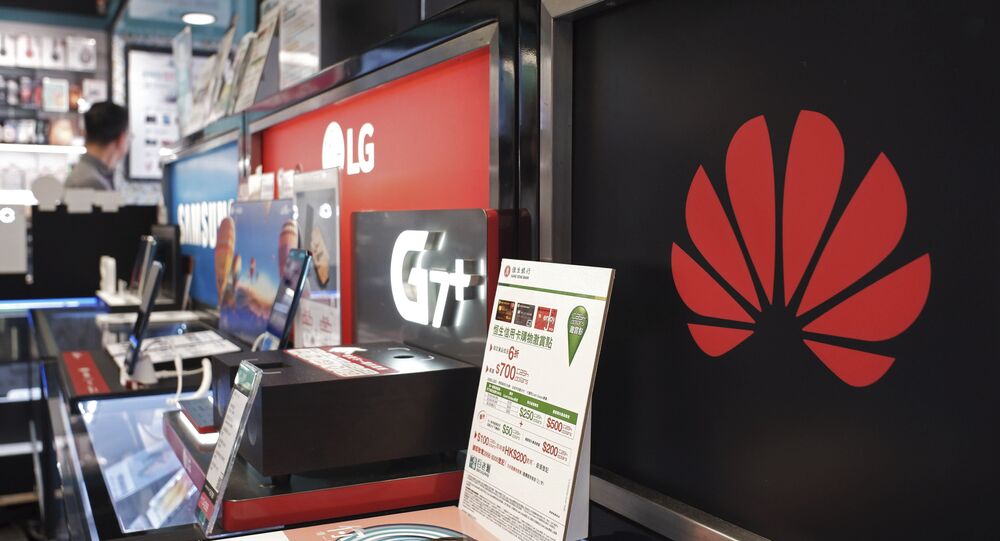 US Fears Eclipse by Huawei, But Doesn’t Have the ‘Clout’ to Stop China’s Rise

Despite attempts by the US and its allies to hem in the telecom giant, the Chinese firm Huawei saw net profits skyrocket by 25 percent last year. An expert told Sputnik that Western tech firms fear the rise of China and its companies, which form a key part of the country’s decades-long plan for national development.

"The US government has a loser's attitude," Huawei chairman Guo Ping said on Friday. "It wants to smear Huawei because it cannot compete against Huawei."

The Shenzhen-based telecom giant posted a record 720 billion yuan ($107 billion) in revenue and nearly 60 billion yuan ($8.9 billion) in net profit in 2018 — 25 percent more than the previous year, according to the company's annual report released on Friday.

Huawei leads the global market in telecoms equipment sales and is the second-largest cell phone maker after Samsung — even surpassing Apple last year. However, it was domestic smartphone sales that carried the company to new financial heights, not international telecoms infrastructure, which fell by 1.3 percent.

The US and the other so-called "Five Eyes" nations — Canada, UK, Australia and New Zealand — have tried to shut down Huawei's access to international markets, warning the company's 5G mobile infrastructure poses security risks. Washington has banned government use of Huawei products and pressured its allies to follow suit; some, like Australia, New Zealand, Canada, Japan and Poland have toed the line, but more and more countries, especially in Europe, have rejected the notion and sought alternate means of addressing the security concerns.

French Foreign Minister Bruno Le Maire told French daily Le Figaro that the US was becoming a "difficult partner" and encouraged the European community to develop as "an independent, sovereign power protecting and investing in its own technologies" and doing business with China.

"All this is indicative of is that the US and the UK, at least, are going to just keep coming for Huawei and other really major Chinese technology companies in the future if they come to threaten the position of those companies in the West," Jude Woodward, the author of the book "The US vs China: Asia's new Cold War?," told Radio Sputnik's Loud and Clear Friday.

​"I mean, just look at the profits that Huawei has declared, which is over a billion [dollars], and the other tech companies that are in that sort of range are Google, Microsoft, so that's where Huawei is now positioning itself," she noted.

"China is concerned to develop; it's set itself the goal of becoming a ‘moderately prosperous' country by 2049. That's the anniversary of the Chinese Revolution," Woodward told hosts Brian Becker and John Kiriakou. "By ‘moderately prosperous,' it doesn't expect to be at the level of the most wealthy countries of the West, but the less-well-off developed economies is what it's aiming for by 2049."

"That's a perfectly reasonable thing to aim for, and Chinese people have a right to expect in the future a standard of living approaching that of people in the West. There's not some special world order which says that of people in the West must be much better off than people elsewhere in the world," Woodward said, "so that's a perfectly worthy goal of China, and that's what it's aiming for. In order to achieve that, it has to participate in world trade, it has to have successful companies, it has to develop technologically, and Huawei is at the cutting-edge of doing that."

"The United States and its closest allies which, increasingly particularly in the context of Brexit than it has been in the past, is particularly Britain, but also Canada and Australia, are just toeing the line of one way of dealing with this situation is to block the Chinese companies from access to the biggest markets," she said.

"That's sort of not working, because the EU is, so far, not playing along with that. There was an EU report on Huawei, recently, too, which said it was up to every country in the European Union whether it used Huawei for 5G or not. It refused to put a blanket ban on the use of Huawei for 5G. So not everyone's going along with this campaign, but it's an absolutely central part of the policy, which is to prevent the greater technological development of China to the point where it's challenging the big Western tech companies," the writer told Sputnik.

However, Woodward said Brexit would drive the UK closer to the United States than to China, though. "Outside the EU, it hasn't got any other important allies, so it becomes a bit of a poodle dog for the US. So I don't see a big improvement in UK-China relations as long as the policy of the US is for a standoff."

"We, as Europeans, want to play an active part [in the project], and that must lead to a certain reciprocity, and we are still wrangling over that a bit," Merkel told Chinese President Xi Jinping on Tuesday, who traveled to Italy and France this week to ink business deals worth over $60 billion.

"Trump, in particular through his intermediary Steve Bannon, was very much courting the Italian government, in order to pursue pro-American policies in Europe, and they thought they got a real hero, in particular with the coalition partners, the Lega, which is a very far-right grouping," Woodward said. "But then they were horrified when the Italian government announced it was the first Western government to sign up to the Belt and Road and was looking to the development of the port of Trieste."

"So it's just not working out that well for the US in terms of Europe, and I think this is because, although… the US is still a very important market for Europe and is still very important in the strategic defense alliances of Europe, it doesn't have the clout it used to have. Europe has got other interests elsewhere in the world, and it's not going to just do as the US says."

Germany Refuses to Tolerate US 'Blackmail' Over China's Huawei