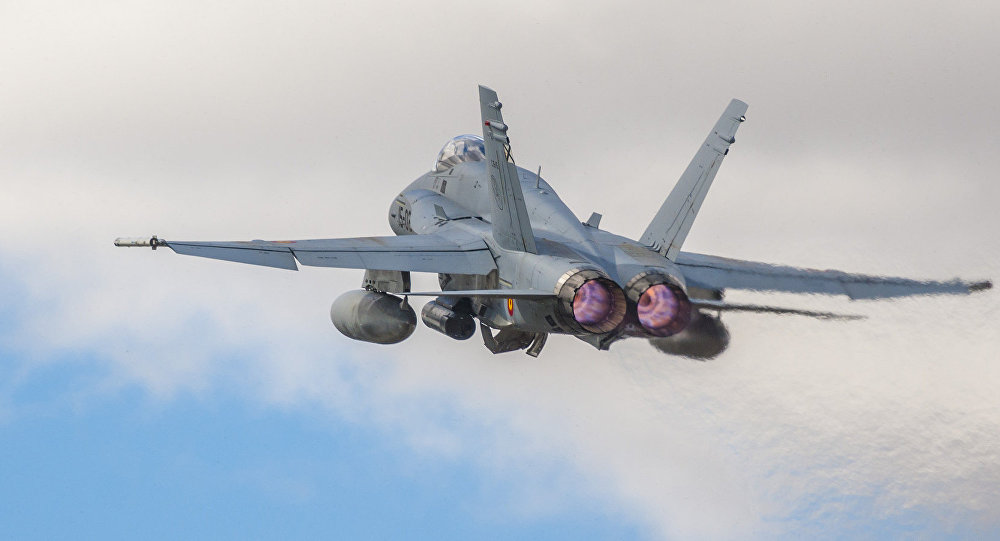 The Pentagon has awarded Boeing $4 billion to build 78 F-18 fighter jets. The project is reportedly expected to be completed by April 2024.

Abraham Ait: It is critical when assessing the U.S. Navy’s modernization of its carrier based combat aircraft to understand the complementary roles allocated to various platforms — namely that between lighter shorter ranged aircraft oriented towards a strike role and heavier platforms designed for air superiority.

© REUTERS / Joshua Roberts
Boeing Software Update Deals With 737 MAX Safety Concerns - United Airlines Vice President
The F-18A Hornet and its modernized derivative F-18C are examples of the former category of aircraft, and entered service from 1984 to replace the third generation A-6 intruder and A-7 Corsair. The F-35C, declared combat ready in 2019, represents a fifth generation successor intended to replace the F-18C, and the older Hornet is rapidly being retired from service.

For the latter role however the U.S. Navy was unable to induct a fifth generation air superiority fighter capable of deploying from its carriers, largely due to budget cuts which ensued following the Cold War’s end, and the service thus invested in acquiring a modernized fourth generation aircraft — leading to the F-18E’s induction into service in 1999.

With the absence of an air superiority capable fifth generation carrier based fighter, it is vital for the U.S. Navy to modernise the F-18E alongside parallel induction of new F-35Cs.

Induction of high end fifth generation air superiority fighters by China and Russia into service from 2017 has been directly cited as an impetus to ensure that the F-18E remains cutting edge, and this has been highly beneficial for Boeing which has won a great deal of support for its F-18E Block III ‘4+ generation fighter’ program.

Boeing won the tender for the Super Hornet upgrade likely as a result of the unique and highly cost-effective nature of its offer. The company has in the past demonstrated its ability to upgrade Cold War era platforms to a high ‘4+ generation’ standard, and perhaps best demonstrated by the highly successful F-15SG, F-15SA and F-15QA programs based on an airframe dating back in its service to 1976.

The Super Hornet remains considerably cheaper to operate and easier to maintain than the F-35C or other stealth aircraft, and while the price of the upgrade at $51 million per fighter (upgrading 78 jets for $4 billion) is high, it remains far more cost effective than alternative options other than abandonment of the F-35C’s carrier-based complement to obsolescence.

© AP Photo / Ariel Schalit
F-35 Program Officials Covering Up Life-Threatening Flaws in Aircraft - Report
Ultimately the Super Hornet appears to be seen as in interim solution for the U.S. Navy until it can enhance its carrier based air superiority fleet with a more sophisticated platform — namely the air to air combat specialized sixth generation F/A-XX which is expected to enter service in the late 2020s.

Sputnik: According to a report from Politico acting Defence Secretary Patrick Shanahan, during Defence Department meetings, disparaged Lockheed Martin in favor of Boeing. How do you assess the level of monopolization of the market by Boeing?

Abraham Ait: Defence Secretary Shanahan’s career of over thirty years at Boeing led to serious concerns begin raised that he may favor this supplier over others.

The Air Force’s recently released plans to acquire 80 F-15EX air superiority fighters in particular, a platform in which it had previously shown relatively little interest, exacerbated these concerns.

However, objectively speaking, Shanahan’s statements criticizing Lockheed Martin are far from unique — in particularly his criticisms of the F-35 program which was previously described by Senate Armed Services Committee Chairman John McCain as ‘a textbook example’ of the country’s ‘broken defense acquisition system.’

© CC BY-SA 2.0 / Dmitry Terekhov / IMG_8624
Brand New Russian Su-35 and PAK FA Turn Pentagon's F-16 Into 'Relic of the Past'
A look at the capabilities of the F-15EX, and concerns repeatedly raised over the past 10 years regarding the emerging challenges to American air superiority, indicates that the fighter could well be an ideal fit for the Air Force’s requirements — with a fraction of the operational costs of the latest Lockheed Martin manufactured stealth fighters and several times the missile carriage (twenty two compared to the F-22’s eight and F-35’s four).

The proliferation of high end Russian air superiority fighters such as the Su-35 and Su-30 for example, which retained a number of key advantages over the F-35 in their air to air combat capabilities such as speed, range, missile carriage and operational altitude, meant that the F-15EX was a much welcome addition to the American arsenal. The same can be said of the F-18E Block III, both of which can play a complementary role to the F-35 on land and at sea.

The MQ-25 unmanned carrier based stealth tanker is another key example, and has been much sought after by the Navy as an ideal response to both the growing threats to conventional tankers posed by extreme range China and Russian air to air missiles (PL-XX and R-37 in particular), and these states’ growing maritime anti access area denial capabilities which force carrier air wings to operate at greater ranges from their targets.

Boeing’s position in the American arms market is far from that of a monopoly. Companies supplying the U.S. military can be better described as an oligopoly, of which Lockheed Martin is the largest and has continued to receive the bulk of contracts.

© Flickr / Gonzalo Alonso
Turbulent Flight? Numerous Flaws of US F-35 Could Result in Failure
While Boeing ranks second in arms sales, both in the United States and globally, the gap between it and Lockheed Martin widened to 40 percent in the Trump administration’s first year.

This was largely a result of Lockheed being awarded the leading role in manufacturing the F-35 fighter jet – by far the largest weapons program in military history.

Whether the disparity between the two manufacturers will change in future, particularly given the dissatisfaction repeatedly voiced by both government and military officials regarding their handling of the F-35 program, remains to be seen — but it could well lead to Boeing taking a greater market share.

Such a development would hardly be unprecedented should problems with the F-35 persist. A similar line of events occurred in the mid 1990s when Northrop Grumman’s poor management of the B-2 Spirit stealth bomber program played a major role in it being denied contracts for future high end combat aircraft programs such as the YF-23 air superiority fighter.

While there is a potential for a conflict of interests, Defence Secretary Shanahan’s statements regarding Boeing’s efficiency in fulfilling contracts relative to Lockheed Martin appears to be well founded.

The latter has cost the US military tens of billions of dollars due to its mismanagement of the F-35 program, and its management of the F-22 program for which it was also prime contractor was also far from ideal with extreme operational costs and maintenance requirements far greater than those initially envisioned.

© AP Photo / Lolita C. Baldor
US State Department Approves $5.2Bln Sale of F-18 Combat Jets to Canada
The former has demonstrated no comparable performance issues. Indeed, Boeing has offered the F-15EX to the US Air Force under fixed-price contract terms, meaning that if the aircraft cost more than what was initially estimated Boeing will be forced to cover these costs itself directly.

This demonstrates the company’s confidence that it can deliver high end weapons systems within budget, eliminating financial risk for the US Air Force.

Abraham Ait: It is critical when assessing technical and safety issues in Boeing’s products to recognize the separation between the two largest divisions of the Boeing Company, which are Boeing Commercial Airplanes and Boeing Defence, Space & Security.

While issues have emerged recently regarding the safety of the 737 civilian airliner manufactured by the former, this does not necessarily imply potential performance issues with the latter’s products.

© REUTERS / Joshua Roberts
Faulty Anti-Stall System Could Crash Boeing 737 MAX in Just 40 Seconds – Report
Recent reports that accidents with the 737 occurred partly as a result of their operators’ refusal to purchase additional safety systems offered by Boeing further undermine attempts to draw a parallel and claim on the basis of these accidents that the company’s military hardware may somehow be defective or compromised. Indeed, the safety record of Boeing’s recent military aircraft such as the F-18E and E/A-18G have been excellent.

Cooperation with the US Military is unlikely to be affected despite recent drama surrounding the 737, and cooperation with the Air Force in particular is likely to expand as the service comes to commission its first major frontline fighter from Boeing in several years in the form of the F-15EX.

By demonstrating it can be a highly reliable partner, in contrast to recent reports regarding Lockheed Martin’s often uncompromising positions in contract negotiations with the Air Force, Boeing can better position itself to win much valued trust and a working relationship which will provide it with a key advantage when bidding for future contracts with the US Military.

Views and opinions expressed in this article are those of Abraham Ait and do not necessarily reflect those of Sputnik.