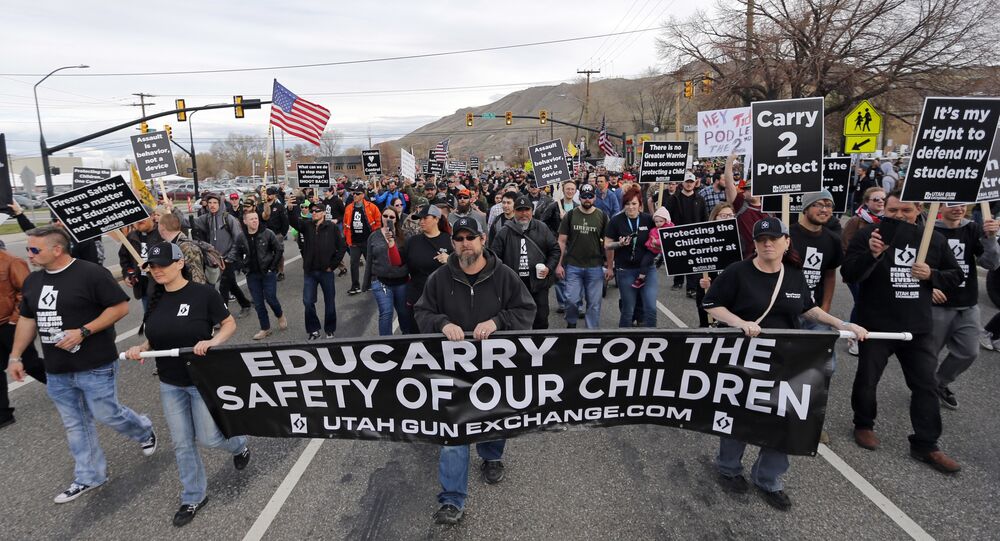 The US state of North Carolina has recently come closer to implementing a much discussed law allowing some teachers to carry firearms on campus. The bill, which passed the first reading, is designed to prevent deadly mass shootings in schools like those that have rocked the US in recent years.

The bill, titled School Self-Defence Act, suggests that teachers in North Carolina schools will be able to carry handguns as a measure to cope with active shooters if they qualify under certain conditions. They will have to pass a firearms training course, regularly present confirmation of their handgun proficiency, undergo a special programme on how to handle active shooter situations, and submit an annual drug test. What is more, they will be required to conceal carry, unless they are responding to an act of violence.

Despite numerous provisions built into the proposed law to prevent turning the notion of arming teachers into a new disaster, many people still oppose the idea as being dangerous or ineffective. Sputnik has asked a gun rights advocate and a school safety activist about their attitudes towards the initiative, its effectiveness and whether it is necessary at all.

Andrew Pollack, an American school safety activist, who lost his daughter in the Stoneman Douglas High School shooting, is confident that the introduction of the bill is a logical step in the school safety debate, which has heated up following recent mass shootings in Parkland and Santa Fe.

F. Paul Valone, president of the gun rights and education organisation Grass Roots North Carolina, has doubts that there are "any greater security problems at schools than any place else", noting that the NC bill is not revolutionary. He pointed out that there are already 20 states that allow "some measure of firearms on school properties", while eight of these specifically arm teachers.

READ MORE: School in US City of Baltimore on Lockdown After Shooting — Police

Speaking about the alleged lack of security in US schools, Pollack was more critical of the safety levels than Valone. He believes that armed personnel would boost security in terms of countering active shooters. Pollack noted that there were police stations at the Santa Fe school and that the timely response from the police had saved many lives. He thinks that the NC bill would allow for such an armed response to become available to any school.

"The idea behind this bill was that there should be at least one good guy on campus who could intercept and neutralise an active shooter. Or deter one; aside from the general deterrent effect of having an armed guard, many shootings stop as soon as the shooter realises that he will be confronted", Pollack said.

Valone agrees with Pollack on the last point, saying that the only way of stopping "violent sociopaths" from committing a mass shooting at a school is to make sure that their victims are able to fight back. He noted that a similar programme has been launched with airline pilots and has effectively deterred terrorism since 2001.

When the idea was initially raised, it divided public opinion, with many openly opposing the notion of arming teachers, instead demanding that gun laws be made stricter; however, others actively supported it. US President Donald Trump was among the latter, actively promoting the idea of having armed and trained teacher in every school and later even at religious sites.

At the same time, a 2018 poll conducted by the PDK showed that only 27% of parents believed that an armed teacher could stop an assailant, while 63% opposed giving handguns to school employees. The School Self-Defence Act partially takes those concerns into consideration, allowing schools to opt out of the programme.

At the same time, Pollack thinks that the poll results were determined by an incorrect "framing" of the question. He points out that many see the bill as an attempt to "forcibly arm the average teacher", whereas the bill in fact stipulates that only those who pass a voluntary and rigorous training programme would be eligible. He noted that many cadets fail their training in Florida, so it's hard to speak about arming every "average teacher".

Valone, in turn, again brings up the states that have adopted similar laws and are doing alright so far.

"We have seen the predicted mayhem in none of these school districts", he said.

The gun rights advocate also pointed out that there are currently two options for training on the table in the bill. One suggests having teachers go through the full basic law enforcement training curriculum, while the other is limited to about 40 hours of training, as opposed to the roughly 600 [hours] that are required by BLET. Valone thinks that even the second option is more than enough to prepare a teacher to handle an active shooter.

Pollack indicated that the lack of awareness about how school shootings unfold also contributes to perpetuating discontent with the notion of arming teachers. He brought up the Marjory Stoneman Douglas state commission, which was initially opposed to similar bill, but 13 of 14 commission members changed their decision after studying footage of the Parkland shooting.

"The shooter stopped to reload five times; if a teacher on any of those floors had been carrying, he could have been neutralized", he said.

The NC School Self-Defence bill was introduced in May 2018 after a series of mass shootings rocked American schools in various states, with the one that took place at Stoneman Douglas High School in Parkland being one of the deadliest. In the latter case, former student Nikolas Cruz killed 17 people and injured 17 more using an AR-15 rifle on 14 February 2018.

The Parkland shooting and the subsequent one in Santa Fe, Texas, which claimed the lives of 10 people, led not only to the introduction of bills offering teachers that volunteer training in order to arm themselves, but also to calls for greater gun control.