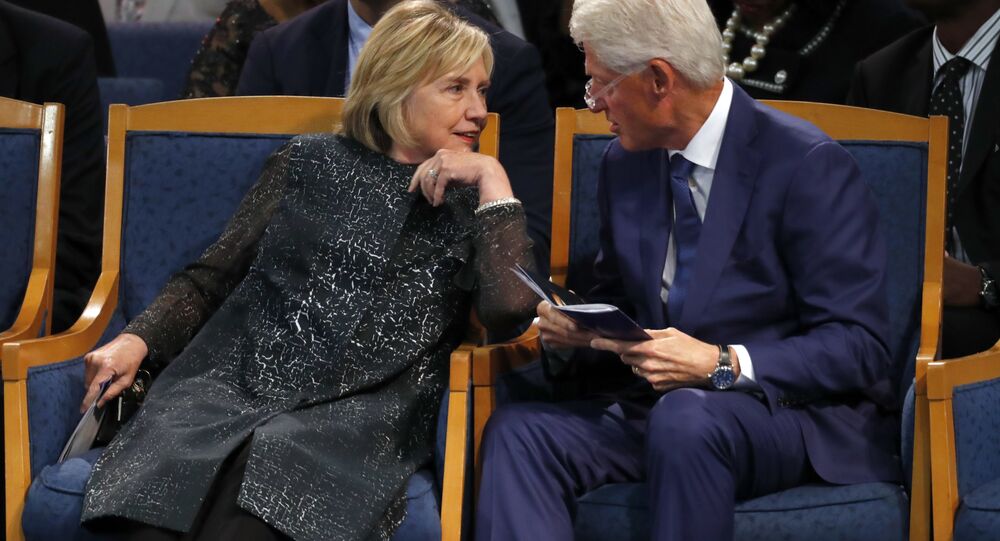 Special Counsel Robert Mueller's Trump-Russia probe has failed to find any collusion on the part of the US president with Russia. Speaking to Sputnik, Wall Street analyst Charles Ortel shared his views on Attorney General William Barr's summary and a potential "counterpunch" from Donald Trump.

"I look forward to reading as much of the Mueller report as may emerge, but, so far, I have to say this effort seems a stunning waste of valuable time and money that has caused lasting damage to the prospect of forging amicable, productive relations between the United States and Russia", Wall Street analyst and investigative journalist Charles Ortel told Sputnik.

On 24 March, Attorney General William Barr submitted a letter to the US Congress summarising Special Counsel Robert Mueller's probe into the alleged collusion between the Trump campaign and Russia during the 2016 presidential election. According to Barr, the Mueller report will not be made public in full.

© Sputnik / Ekaterina Chesnokova
From Bin Laden to Anna Chapman: Analyst Lists Ex-FBI Chief Mueller's Major Flaws
According to the Wall Street analyst, "one way to read this is that a team including partisan Democrats and Hillary Clinton supporters, using considerable resources and taking many months of time, just admitted that it decided not to hand down a single indictment for the explosive charge that ignited the central charges against the Trump campaign".

"Barr's summary of Mueller's conclusions seems to make it clear that he and his team found no actionable evidence of coordination between the Russian government and the Trump campaign during the 2016 election", Ortel emphasised.

What Was the Real Goal of Trump-Russia Probe?

The question then arises about the real goal of the probe and whether Democrats managed to capitalise on it.

While shedding light on the issue, Ortel stressed that "we do not yet know the precise marching orders that the FBI created for its team to begin its investigation into the Trump campaign and potential Russia links, or when this investigation began".

In fact we know only the scope of authority that Mueller had on 17 May 2017, when his investigation began, he noted.

The investigation was aimed at finding: first, "any links and/or coordination between the Russian government and individuals associated with the campaign of President Donald Trump"; second, "any matters that arose or may arise directly [emphasis added] from the investigation"; and, finally, "any other matters within the scope of 28 C.F.R. §600.4(a)".

Ortel's strong suspicion is that "the initial FBI investigation(s) and the Mueller probe after Comey was fired were intended to distract public attention from epic failures under previous presidents to root out charity fraud, corruption, and other crimes".

"Far from being a 'scandal-free' administration, Barack Obama's years as the US president saw numerous scandals fail to get the kind of attention that Mueller accorded questions of coordination between Russia and the Trump campaign — here, I think of attempts to ‘sell' Barack Obama's Senate seat, 'Fast and Furious' (the suspicious transfer of illegal weapons into Mexico),  US efforts to destabilise the Middle East ('the Arab Spring'); IRS persecution of Obama/Clinton enemies; fraudulent attempts to 're-organize' Clinton Foundation entities; 'pay-to-play' allegations involving Uranium One, and learning what actually happened at Benghazi, to name just a few", Ortel summed up.

The investigative journalist presumed that "President Obama, Democrats and 'Never-Trump' Republicans thought they could hobble Donald Trump — a political neophyte — and maybe even push him out quickly".

"So far, it would seem that President Trump's opponents punched well below their weight", he underscored.

Republicans May Appoint Special Counsel to Probe Into Probe

It appears that Mueller's conclusions are likely to lift the cloud from the US president's horizon, and pave the way for his potential second term in the office.

Commenting on this, Ortel pointed out that "in a storm of negative publicity from the start, Donald Trump has managed to achieve much, even a steadily rising approval rating in polls".

At the same time, the analyst suggested that Democrats have found themselves on thin ice: "Democrats have much to fear as the attorney general and others decide whether investigations into how the FBI triggered Mueller's probe proceed", in an apparent reference to the ongoing controversy simmering around issuing a Foreign Intelligence Surveillance Act (FISA) warrant against Trump's ex-aide Carter Page.

© Sputnik / Vladimir Astapkovich
'Fishing Expedition': Analyst on House Dems' New Efforts to Dig Up Dirt on Trump Ahead of 2020 Race
On 25 March, Senate Judiciary Committee Chairman Lindsey Graham signalled that he would ask Attorney General Barr to appoint a special counsel to probe alleged misconduct related to the Trump-Russia investigation.

"We will begin to unpack the other side of the story", Republican Senator Graham said.

Citing House Democrats' effort to dig up dirt on Trump, spearheaded by Congressmen Jerrold Nadler and Adam Schiff in early March, Ortel opined that "should Democrats whip up a frenzy in the corporate-owned media for House hearings and set up a push for impeachment proceedings, I imagine that President Trump will counterpunch using considerable force".

"One potential piece of good news is that the ground is now clearer for the United States and for Russia to set an open table on which issues, concerns, and opportunities might be discussed comprehensively, now that it is crystal clear there was no coordination during the 2016 election cycle between the Trump campaign and Russia", the Wall Street analyst highlighted.

Why Trump Must "Drain the Swamp"

When asked whether the US president will deliver on his promise to launch a counter-attack on his ardent antagonists, including the Clintons, Ortel said that "given mountains of evidence suggesting that the Clintons and others still lead what I believe are the largest charity frauds ever attempted", it's unlikely that "President Trump and Bill Barr can give the Clintons a pass".

"Trump supporters and many Progressive Democrats are strenuously against fraud and corruption involving proponents of 'unregulated globalism' in both parties", the investigative journalist said. "Borrowing and modifying one of President Obama's slogans — 'Yes, he can' and should investigate the now discredited investigators".

According to the analyst "there is no better way to do so, in my opinion, than invigorating real investigations into Clinton Foundation frauds and public corruption that has become too widespread in national capitols around the world".