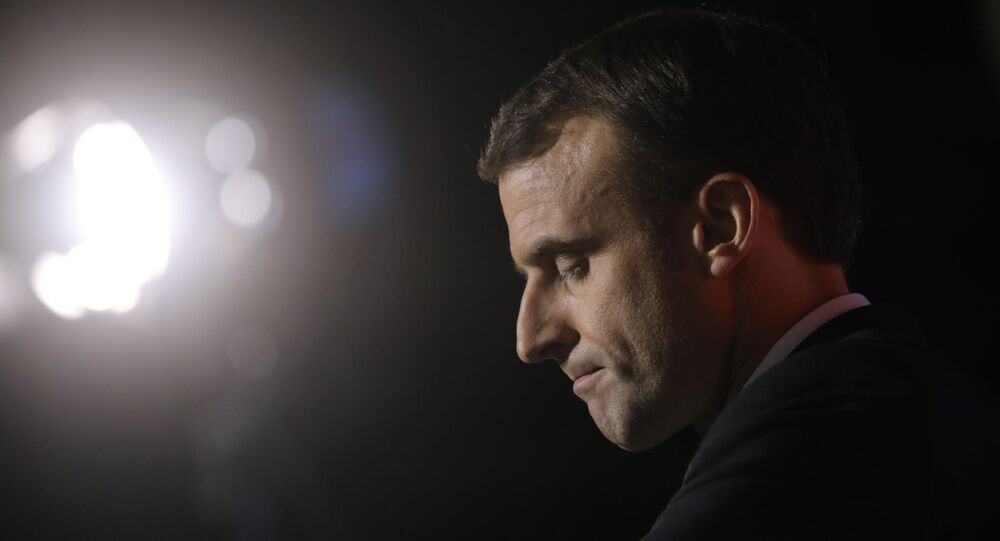 French President Emmanuel Macron stated last week that "the period of European naivety" regarding the EU’s relations with China is over. "The relationship between the EU and China must not be first and foremost a trading one, but a geopolitical and strategic relationship," Macron told a news conference after an EU summit in Brussels on Friday.

Macron's remarks came a week after the European Commission published a ten-point list on the balancing of relations with Beijing amid China's growing economic and political clout. The French President also urged the EU to "confront the United States and China, which remain allies on certain issues". He claimed that the EU has what he described as "systemic opponents" who are both trading partners and investors. He warned the EU countries not to negotiate on investments in infrastructure and strategic funding on a bilateral basis, urging them to jointly coordinate their actions at the EU level

Sputnik: The French president urged the EU member states to focus more on the geopolitical and strategic aspects of relations with China; what do you think was the reason for Macron to address this issue, and is it ever possible then to build such a kind of a relationship between the EU and Beijing?

Loren Puette: It appears to me that Macron is drumming up support for his recent initiative. Earlier this month, in March, the Council of the EU approved a regulation that would establish a framework for screening foreign direct investments into the EU.

© AP Photo / Pablo Martinez Monsivais
Trump Kept Macron in the Dark About Talks With China Amid EU Tariff Row – Reports
As it currently stands, only 13 of the 28 EU member states currently review foreign direct investments into their countries on national security concerns. So there's been a push within the EU that they need to develop a complete framework within the EU, as opposed to an individual country basis, and basically, the EU wants to protect their strategic technologies and infrastructure, while before this, they were primarily concerned with competition concerns.

If a Chinese company would come in and purchase something in France or Germany, they'd be primarily concerned with whether that would create a monopoly or out-compete local industries, so now they're shifting towards something a little bit more strategic.

So they're going to be focusing on critical sectors of concern within the European Union like aerospace, nano-tech, electronics, even the supply of food, which is my professional background, which is in agriculture.

So they're going to be looking at all these aspects, and Macron is just trying to circle the wagons and trying to broad-based support among all the EU member states because here and there's been certain EU member states that have taken on Chinese investment without much oversight.

Sputnik: Regarding Italy becoming the first G7 country to approve China's Belt and Road Industrial Initiative. Several trade agreements have been signed between Italy and Beijing; do you think we can expect the EU countries to follow in Italy's footsteps?

Loren Puette: I just think France and the rest of the EU are trying to remind that the number one priority is the European Union and not Chinese interest through this One Belt, One Road Initiative.

© AFP 2020 / Mark Ralston
EU Outlines Strategy to Balance Ties With Beijing as China's Power Grows
This first started off with Hungary, I think they were the first EU member state to accept the One Belt, One Road. China has been making inroads within Europe, though mostly on the periphery, so this is kind of a big deal, now that Italy has undertaken this. In the past it's been Hungary, it's been Serbia which is not an EU member, but it's a candidate country, as well as Ukraine. So there's concern within the EU and the US, which has also been highly critical of the One Belt, One Road Initiative.

So the One Belt, One Road is one way to do this, because the Chinese economy for the past two decades has really been booming, so they have a lot of cash on hand to do these types of investments, and what better than the European Union, which has been a relatively stable economy as a whole.

Sputnik: The US remains in a tariff war with both the EU and China, but while Beijing has been looking to boost trade ties with Europe amid the ongoing economic dispute with the US, what steps can Washington take now? I think it was Mike Pence a month or so ago, he was visiting the African nations imploring them to obviously deal with America in terms of trade agreements rather than China. They do seem to be somewhat under pressure, the American administration, with regard to retaining global power and trade, it seems as though we're in for a very interesting four or five yearsb and we've had Xi Jinping's address 18 months ago saying that he expected China to be a global trading power within 25 years, so it does seem like it's heading that direction; have you got any comments?

Loren Puette: Well it's just interesting because Mike Pence he said basically Africa needs to go to the US more, but at the same time they're cutting spending like foreign aid and development aid to Africa, while China is pretty much stepping in and replacing the US in terms of the amount of money they're investing in Africa. So there's saying one thing but not necessarily seeing it on the ground.

© REUTERS / Christian Hartmann
Macron Under Fire for Ordering Pricey China Set Amid Row Over Public Spending
What the US can do is they can help advise the European Union. The US along with Australia they both had a foreign direct investment screening system in place since the mid-1970s and we're talking almost in 2020 when the EU will finally enact their broad-based screening system.

So you can say they're a little bit behind the times, the EU, and they can work with the US and even Australian in figuring out ways how best to approve certain investments and maybe not approve other investments, based on national security concerns.

So it's definitely going to be a growing process, the EU is a special case, because in the US, decisions are made at the federal level and not the individual state level, whereas within the EU you have individual member states and I believe the process is going to come down to individual members states choosing whether to let foreign investment come in or not. Typically China hasn't been stated all these policies, but it's pretty much understood that this is why they're doing it.

Sputnik: You've mentioned your area of expertise is agriculture. Is America positioning its agricultural industry and trying to increase exports in the loom of potential losses in other areas? What can you share with us in terms of this administration's strategy in agriculture, it is key for them retaining global percentage share of trade moving forward, then? What can you share with us?

© REUTERS / Gonzalo Fuentes/Pool
Macron Urges EU to Confront US, China, Says ‘Period of European Naivety’ on Brussels-Beijing Ties Over
Loren Puette: From my point of view, they are using their agricultural trade as a negotiating tactic. The US wants to improve their exports of industrial goods like steel and aluminium and also electronics, and the one chip that they can kind of play in the global trading system is their agriculture, because basically they operate with a trade surplus when it comes to agriculture, but with a trade deficit in everything else.

So they're kind of sacrificing their agricultural goods in hopes that they can balance it out if not a little bit more with their industrial goods. I don't know if that's going to happen or not. Macron was in the Horn of Africa this month and one country that he stopped by was Ethiopia and China has reached out to Ethiopia and even poor Djibouti, which is a bordering country there.

They said: "We're going to buy more soybeans from Ethiopia in order to counterbalance the losses that were receiving from the US because they're not supplying us anymore because of this trade war". So what you're going to see emerge is a decrease in trade, with the US and new trade patterns emerging, particularly in Africa, because they can step up to the plate, and a few other countries, but there's no way the US is going to be able to find a trading partner like China to buy all their agricultural goods as they have in the past, so I'm kind of pessimistic on that front.