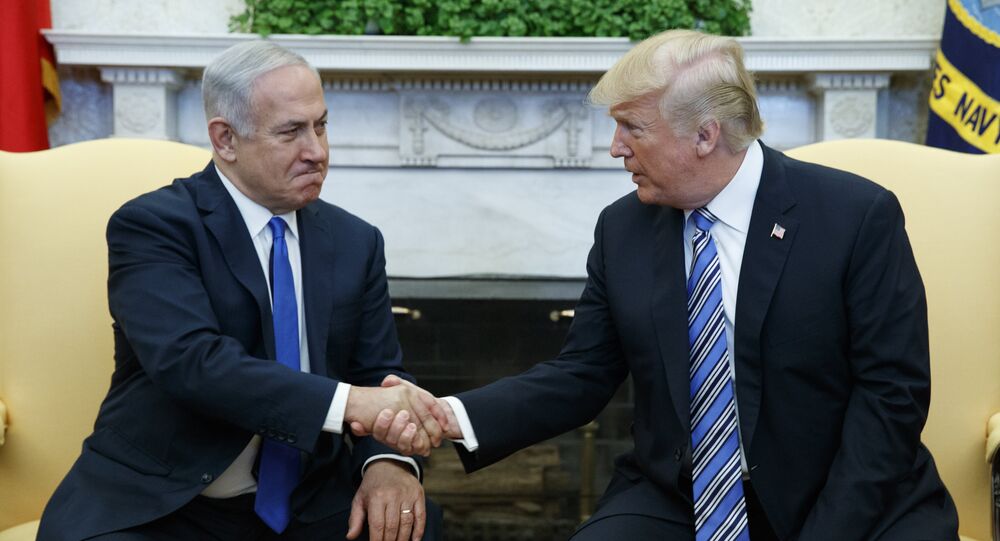 On Thursday, US President Donald Trump announced he would recognize Israel’s claim to sovereignty over the Golan Heights. For 52 years, no US leader has gone against United Nations resolutions regarding Israel’s occupation to be illegal. A peace activist told Sputnik Friday it was a cynical political ploy by Washington.

The declaration shocked both friends and enemies alike, as despite the close US-Israeli friendship, Washington has never challenged the United Nations' resolutions denouncing Israeli occupation of the region, which sits north of the Sea of Galilee and was taken from Syria by force in 1967. Thursday, it became the first country to recognize Israel's claim.

The United Nations reiterated its position Friday, Sputnik reported. The Syrian government called Trump's move "irresponsible" and promised it would liberate the territory from Israeli control one day.

Ariel Gold, a peace activist and the national co-director of Code Pink, told Radio Sputnik's Loud and Clear that the move had been prefigured by Trump's recognition of Jerusalem as the capital of Israel in December 2017, something else long claimed by Israel but not recognized by the rest of the world and regarded as illegal by the United Nations.

​"I see this as part of a continuum of the way that Trump is intervening in the way of a hopefully peaceful solution to the Middle East conflict," she told host John Kiriakou.

"There's a number of things that are really converging here at once," Gold said. "We're also looking at the budding friendship between both Israel and Saudi Arabia and of course, as we're watching come out right now in the news, more about [Jared] Kushner's relationship with Mohammed bin Salman [MBS], the Saudi crown prince and ‘bonesaw murderer,' as he's commonly referred to."

"Not too long ago, MBS said to the Palestinians, basically, ‘Take what you're offered and suck it up.' What this is about, and we're watching right here, is this… changing of what were the classic alliances and lines of the Middle East. And now we see partners in repression and partners with the US, like Saudi Arabia and Israel — so we have these like, massive powerhouses. And if we look at who's spoken out against the announcement of Israeli sovereignty in the Golan Heights, we see that Saudi Arabia has not condemned it. I'm not at all surprised at that," Gold said.

"So what Trump has basically said to the Palestinians, and MBS has actually backed this up, is, ‘Peace looks like you giving up any dream of having your rights at all. You accept the status quo, and then we'll call that peace.'"

Gold explained that Israel had seized the Golan Heights from Syria in 1967 during what Israelis called the Six-Day War, however it's also called "An-Naskah," The Setback, by the Palestinians, or the June War or the Third Arab-Israeli War by others. It was during this war that Israel also seized the West Bank from Jordan. Israel also seized the entire Sinai Peninsula from Egypt, although it later returned all of the peninsula except for the Gaza Strip in 1979.

However, the Golan, West Bank and Gaza have remained occupied ever since.

"During the 1967 invasion, Israel forcibly displaced over 130,000 Syrians. Today there are only around 25,000 Syrians that remain in the Golan Heights in only five villages," Gold explained. "They are subject to the same type of discriminatory policies, like home demolitions and land confiscations, the Palestinians are in the West Bank, and a real attempt to either drive them out or erase their culture entirely."

"One of the methods used to erase their culture is to not refer to them as Syrian, but only as Druze, which would bring them under an umbrella of Israeli, because Druze are a Palestinian population inside Israel that does serve mandatory military service. So it's kind of an interesting way that it's happened," Gold said.

Both a religious and ethnic group, the Druze practice a religion that dates to the 10th century AD and is considered by some to be a derivation of Shia Islam, although the Druze don't think so, and their religion also has many influences from Gnosticism and Platonism. There are about 1 million Druze scattered across the mountains of the Levant, with over half living in Syria but also significant populations in Israel and Lebanon.

Gold explained there are roughly 34 Israeli settlements in the Golan, contrary to popular perception, which are home to about 25,000 Israeli settlers, and that Israel uses the area both as a heavily agricultural zone and as a buffer between it and Syria. Syria remains the only Arab state that fought against Israel in the Arab-Israeli Wars to have not signed a peace treaty with Israel; consequently, the two countries remain at war.

However, Gold said that "last June, the Israeli deputy minister, Michael Oren, announced a plan to rapidly develop settlements in the Golan Heights aiming to raise the population of illegal settlers there from around 25,000 now to 100,000 within a decade."

"I cannot overemphasize the relevance of areas where there is water," Gold told Sputnik. "Areas of water is also a reason that Israel will never give up the West Bank."

"This is an election present, an election gift from Donald Trump to [Israeli Prime Minister Benjamin] Netanyahu, because Netanyahu's been taking some hits recently in the polls, due to his pending indictment, and so this really helps him to — I'm sure Trump hopes — regain his advantage," Gold said, noting that much of Netanyahu's re-election campaign for the April 9 vote focuses on his close relationship with the US president.

Sputnik News analyst Walter Smolarek noted the irony of the US overtly meddling in Israeli elections, given the brow and bluster about the prospect of US elections having potentially been meddled with; Gold noted the same was true of US actions in Venezuela for the last two months.