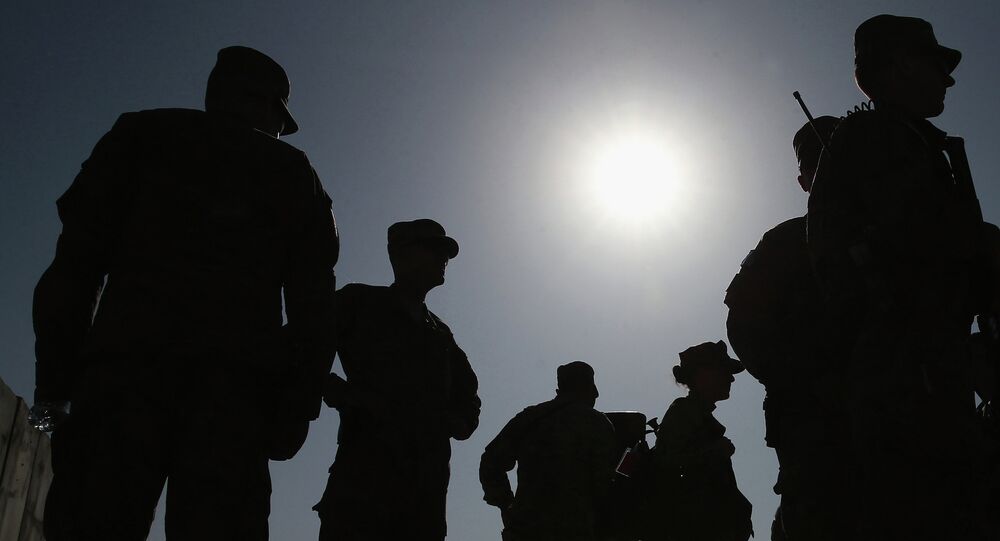 ‘It’s Nothing New’: White Supremacists Continue to Infiltrate US Military

Daryle Jenkins, founder of the anti-racist group One People’s Project, joined Radio Sputnik Tuesday to discuss the need to expose the cozy relationship between white supremacists, US police forces and US military services in light of the recent discovery that several US service members are reportedly affiliated with white nationalism.

According to an investigation by the Huffington Post, seven current members of the US armed forces, including two Marines, two Army Reserve Officers' Training Corps (ROTC) cadets, an Army physician, a member of the Texas National Guard and a member of the Air Force, are affiliated with Identity Evropa, an American neo-Nazi and white supremacist organization established in March 2016. The racist and anti-Semitic group helped organize the 2017 Unite the Rally rally in Charlottesville, Virginia.

​"Identity Evropa started off as an organization called the National Youth Front, and it was an organization by members of a larger group called the American Freedom Party. It's been around since 2014. They've had a number of different leaders, including three military veterans… Another [derivative] group was formed by members of Identity Evropa that is now called the American Identity Movement," Jenkins told By Any Means Necessary hosts Eugene Puryear and Sean Blackmon.

According to the Anti-Defamation League, Identity Evropa was founded by Nathan Damigo, an Iraq war veteran who also served five years in prison until 2014 for robbing a man he believed was from Iraq. He became radicalized in prison after reading former Ku Klux Klan leader David Duke's book "My Awakening: A Path to Racial Understanding."

In its report, the Huffington Post revealed that Identity Evropa members use a server on Discord, a chat app, to communicate with each other. Last week, non-profit media collective Unicorn Riot published more than 770,000 messages from Discord associated with Identity Evropa. After the chats were published online, Identity Evropa's current leader, Patrick Casey, announced that the organization is going to be rebranded into the American Identity Movement, in a likely effort to distance itself from the Unite the Right rally and appeal to supporters of US President Donald Trump.

After reviewing the Discord log, the Huffington Post uncovered the identities of seven white supremacists who are members of the US military. In addition, Daniel Morley, an officer for the Chesterfield County Police Department in Virginia, was also found to be an organizer for Identity Evropa, according to the Unicorn Riot leak.

"Their messages on the Discord server indicate that they hold deeply racist and anti-Semitic views and participate in Identity Evropa propaganda campaigns, posting stickers and flyers in cities and on college campuses," the Huffington Post reports.

"Our Military Unit Coordinator will advise members on recruiting activities in the armed forces, on appropriate conduct, and on security matters… The Military Unit, with its membership based solely on occupation, is a new development for the Alliance, and we intend to make it a successful one," Pierce wrote in a 1999 National Alliance Bulletin document, according to the Southern Poverty Law Center.

"When you have a commander-in-chief that is sending out signals to them [white supremacists] that says, ‘I'm going to do business with you,' that's not surprising," Jenkins told Sputnik, referring to the prevalence of white nationalism in the US.

"It's going to take pushback from the general public to ensure that none of their actions go so far. Luckily, a couple of weeks ago, we had that character, the lieutenant in the Coast Guard [Christopher Hasson], who was arrested for [planning] to [commit] the same kind of attack that just happened in Christchurch [New Zealand]," Jenkins told Sputnik.

"And he had the same ideology as the killer in Christchurch, and he was in the military. It's important to recognize that this just keeps on happening, especially since the New Zealand shooter said that there are more attacks being planned as we speak. And to that point, I would say that I just learned the Democrats who are running the House Judiciary Committee have said that they are going to open up hearings into the influence of white nationalism some time in April," Jenkins noted, also adding that it is a violation of the US Uniform Code of Military Justice to be associated with any white supremacist organizations.

In February, Hasson was arrested by agents from the FBI and US Coast Guard Investigative Service at his home in Silver Spring, Maryland, where he was found to have thousands of rounds of ammunition as well as many rifles. And what's more, he had a hit list of politicians and media figures, Sputnik previously reported. He identified as a "long time White Nationalist, having been a skinhead 30 plus years ago before [his] time in the military."

Hasson had been working at Coast Guard headquarters since 2016, but previously served in the US Marine Corps from 1988 to 1993 and in the Army National Guard for two years in the mid-1990s, Sputnik previously reported.