Sputnik: Why is Berlin taking a step to cut its military budget notwithstanding US calls to meet NATO's quota? It's very interesting; relations have become increasingly frosty between Germany and the US ever since Donald Trump came to power. So, it's an interesting bit of news.

© AP Photo / Matthias Schrader
Germany Plans to Cut Military Budget in Spite of Trump’s Calls to Reach NATO Target
Alessandro Politi: As you know, coalition governments are always complex things to be managed. And so, as you see, one of the most important parties in the coalition is now having doubts. Clearly, this is something that also is done with an eye to the next European elections. And clearly, the SPD has its own problems in getting consensus. So, this is an easy line of attack. The interesting thing is, of course, that the target — that Berlin itself has proposed 1.5 percent which is already below 2 percent — is still reachable but, of course, if this budget is not passed this year, later on it will be more complex. The budget is another great classic of politics, of pushing problems for later, for somebody else probably, and not immediately.

Sputnik: We also know that US Ambassador Richard Grenell has already expressed regret about Germany's move. What could Washington and the administration do in response to Germany's reneging on boosting military expenditures? They are not going to view this action very positively, that's for sure. I'm sure there are going to be a few tweets from President Donald Trump with regard to sticking the knife in. What can you add to that?

© Sputnik / Sergey Malgavko
Turkey's S-400 Purchase Poses a ‘National Security Problem’ to NATO, Media Claims
Alessandro Politi: The ambassador is, as every ambassador, doing his own duty, but it is also true that the actual targets are not unrealistic in economic terms but in the way they are framed. At a Warsaw conference, General Jones' former secretary said there must be more sophisticated ways of measuring this famous 2 percent, because a lot of expenditures that are directly affecting transatlantic security are not done in the Defence Ministry and yet they contribute. Imagine just now this military Schengen moving troops quickly across one border to another; this is not really defence, it's public transportation, it's private railways and yes, it is an important contribution.

So, the insistence on spending is important for a number of good reasons, but an alliance is, first of all, a political matter. And here, of course, things are not easy, but they can't be easy after 70 years of an alliance that has had its own successes and well this needs patient hammering out. The important thing is that the counterparts among the allies have enough patience, and don't think that just with a quick dash you can solve these problems that are very old. Imagine that Germany immediately spends 2 percent, the absorption capability of that 2 percent inside that machinery, by Germany's admission at least in several German newspapers, would not be immediate because there are things that need to be caught up, and this takes time. 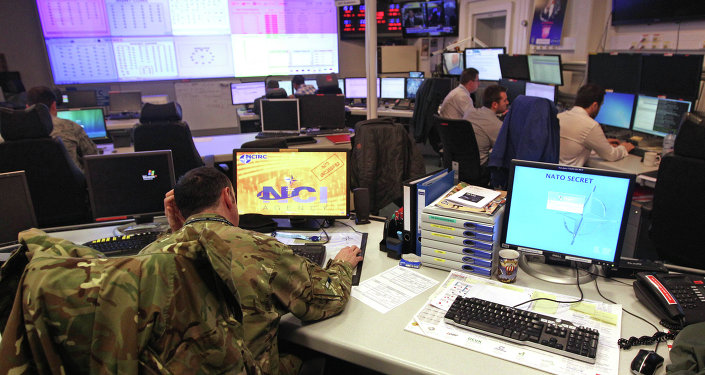 © AP Photo / Yves Logghe
NATO Baltic Cyber Centres Targeting Key Russian Infrastructure - Moscow
Sputnik: It's interesting that you're highlighting other factors, other elements that really are part of the contribution to NATO. I've not really thought about it in that sense, but I suppose you're actually right in terms of the overall contribution. Whether that sticks with Donald Trump or not is another question, of course. How much could this deepen the already brewing estrangement between the NATO allies? I mean, we've seen since this administration came to power, almost his first soiree to Europe, that he was very adamant in terms of his language, in terms of the contribution that the NATO allies were putting towards the NATO budget, specifically Germany. And since then we've had this indifference on many fronts, not just with NATO but we've had the trade treaties, business between America and Germany; and now we've got the question of the Russian gas as well and President Trump berating the German administration with regard to their use of Russian gas. And now we've got this; what's going to happen now in terms of this estrangement? It's only going to unravel further, isn't it or am I just jumping the gun?

Alessandro Politi: No. Of course, your worries are based on facts. But on the other hand, personalising issues — the US is represented by Trump, but the US is in its position within NATO. So, the last Berlin summit was very clear in its own written document on things that must be done and that are agreed by all because NATO functions only if there is a consensus; it's not the Warsaw Pact that was existing many decades ago. So, that is a consensus and they think it's still reasonably solid. Of course, there are differences between one president and the other, and, of course, there are issues that are sensitive, you named them already. But I must remember that when the Soviet Union was the enemy, not just a regional competitor or whatever, European countries accepted the receipt of Soviet gas. Of course, at that time our American friends had some problems, but in the end, everything went quite smoothly. Now the situation has changed, Crimea is an extremely serious issue, but there are different levels where different issues can be treated accordingly.

Polish President Says EU Not Interested in Competing With NATO