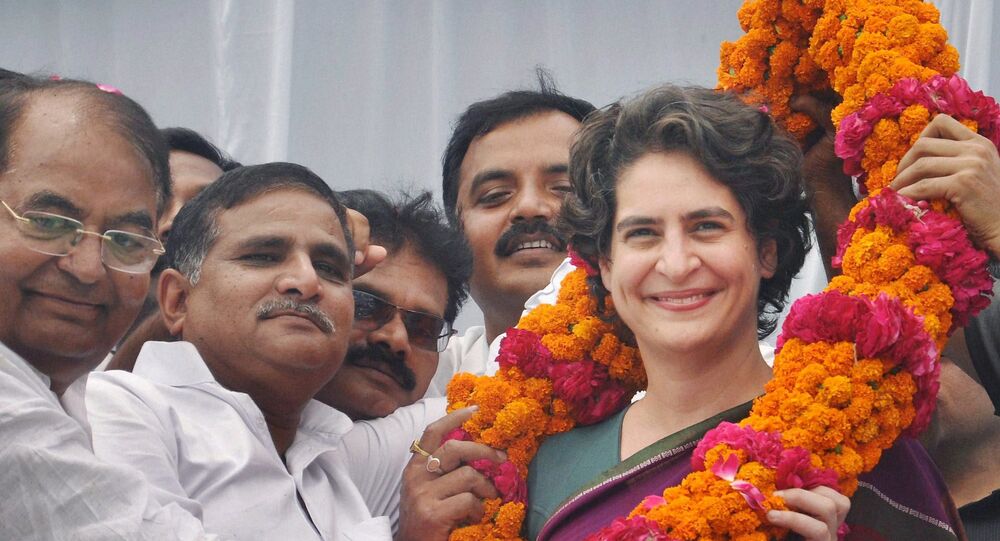 Priyanka Gandhi, a scion of India's oldest political family, the Nehru-Gandhi family, has plunged into active politics by campaigning for the Congress Party for the upcoming general elections in which her brother, Rahul Gandhi, hopes to trump Prime Minister Narendra Modi.

New Delhi (Sputnik): With elections to the Indian parliament less than a month away, the most talked about recent development has been the entry of Priyanka Gandhi Vadra, the scion of the Nehru-Gandhi family, to the campaign scene in aid of her brother and Congress Party President Rahul Gandhi. With the opposition led by the Congress pitched against a formidable opponent in the form of the governing Bharatiya Janata Party (BJP) and its leader and Prime Minister Narendra Modi, Sputnik talked to Venkitesh Ramakrishnan, senior associate editor of Frontline Magazine, to understand the impact and purpose of the hyped entry of Priyanka Gandhi in Indian electioneering.

Sputnik: As a political observer, how do you think the entry of Nehru-Gandhi family scion Priyanka Gandhi will impact the Indian political discourse?

© AFP 2020 / SANJAY KANOJIA
Indian PM Continues to Dominate Popularity Chart Despite Dip in Ratings - Survey
Venkitesh Ramakrishnan: There is little doubt that Priyanka Gandhi's entry would enhance the political discourse in India, especially in the north Indian state of Uttar Pradesh, which the Nehru-Gandhi family belongs to. We are already seeing signs of this discourse. It covers several aspects including the policy orientation of the Congress as well its internal dynamics, including organisational structure and manoeuvres. However, the electoral impact of her entry is something which would have to be ascertained in due course, as and when she becomes more regular in the organisational circuit and her work gets more widespread.

Sputnik: Is it a grace saver and last-ditch effort of the Congress to put its house in order, which saw its worst performance in the 2014 polls? How would her entry impact the Congress' fortune?

Venkitesh Ramakrishnan: As stated above, it is too early to assess the electoral impact. But the pervasive sense in the political firmament is that the entry's tangible gains have been minimised on account of a perceived delay. Evidently, the Congress is seeking to enhance the recent gains it has made in the assembly polls, but there is little doubt her entry would have had greater traction if it had happened during the UPA II regime, preferably in its latter years.

Sputnik: As a person who has observed politics so closely, how do you assess the strengths and limitations of Priyanka Gandhi as a political personality?

© CC0
Indian Activists Claim Discrimination by Law, Demand Political Solution
Venkitesh Ramakrishnan: Priyanka Gandhi's personality has three obvious strengths: her natural charm while interacting in public, mass appeal on account of her striking resemblance to her grandmother Indira Gandhi and a sense of dynamism that she seems to effuse. However, she is yet to prove herself as somebody who has sustained interest in politics and national affairs. Unless and until she is able to disprove the doubts that exist on her staying capacity, the larger impact of Priyanka Gandhi's entry would not be as high as it is expected in certain sections of the polity and the Congress.

Sputnik: Do you think Priyanka's entry in politics is a statement against the current party president and her brother, Rahul Gandhi?

Venkitesh Ramakrishnan: I do not think so, though there are efforts to portray her political entry in these terms. I am of the view that her entry marks Congress' plans to put up a spirited battle in the assembly elections of Uttar Pradesh, scheduled for 2022, by projecting Priyanka Gandhi as the chief ministerial candidate. Evidently, this is inspired by the recent assembly election victories in the states of Rajasthan, Madhya Pradesh, and Chhattisgarh.

The views and opinions expressed in this article are those of the speaker and do not necessarily reflect the official position of Sputnik.

Corruption Back in Indian Election Narrative With British Middleman in Custody