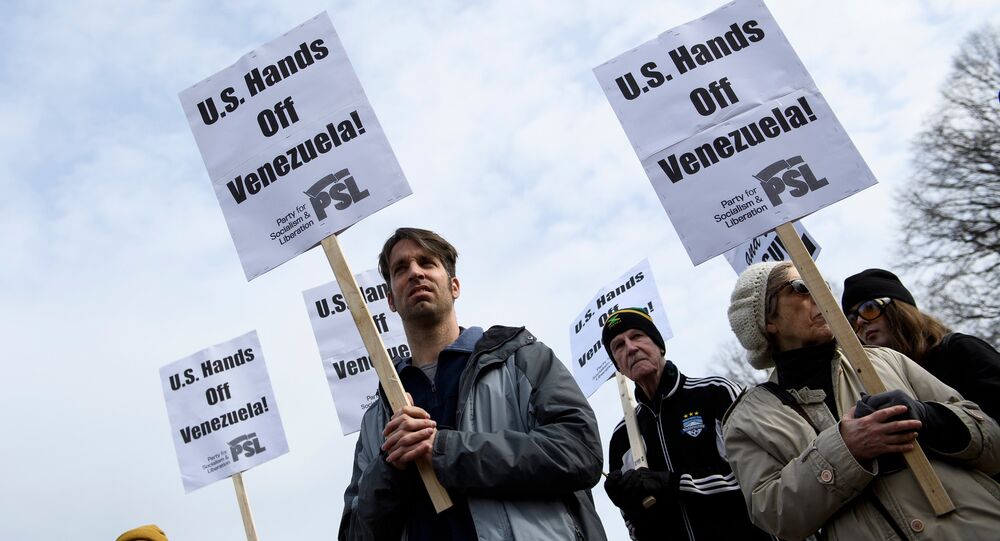 According to reports, the Venezuelan President, Nicolas Maduro, has asked cabinet officials to ‘put their roles up for review’.

The reshuffling comes in the wake of a 5-day long energy blackout which caused major disruption to daily life in Venezuela, leading to the closure of schools, the collapse of hospital services and grinding the Caracas metro to a halt. President Maduro blamed the power outage on a US-led cyber attack, combined with sabotage attempts by the opposition in support of Maduro’s rival for the Presidency, Juan Guaido.

This comes as opposition leader Juan Guaido is reportedly touring rural Venezuela to mobilise support for his campaign to oust the Venezuelan President.

Sputnik spoke to Jorge Martin from Hands Off Venezuela and asked him how significant he thought it was that Maduro was reshuffling his cabinet at this time.

Sputnik: How significant do you think it is that Maduro was reshuffling his cabinet at this time?

Jorge Martin: Well it is difficult to know until we know the exact content of the announcement. Yesterday President Maduro asked all his ministers to put their ministerial positions at his disposal and he announced there was going to be a restructuring of the government. But obviously all of this is in the context of the renewed offensive by US imperialism to remove the Maduro government in Venezuela. This comes one week after the massive blackout that left the whole country in the dark for five days. I think that this is probably related to that.

Sputnik: Opposition leader Juan Guaido is reportedly touring rural Venezuela to mobilize support for his campaign to oust President Maduro; how much support do you think Guido can generate in the Venezuelan countryside?

© AP Photo / Lucio Tavora
‘More Democratic Western Hemisphere’: Brazil’s Bolsonaro to Meet With Trump In His First Visit Amid Venezuelan Crisis
Jorge Martin: Not much. He was at a rally in Valencia on Saturday — it was not very big. They showed some images which were close-ups which looked like a lot of people but there were also aerial shots of the demonstration and they were not very big. But Valencia is not in the countryside; if he is touring the countryside or rural areas he will not get much or any support because his program that he published a month ago, what he wants to do if he becomes President includes the privatization, the return of land that was expropriated under President Chavez and was given to peasants and cooperative communities, back to the former landowners. So I think that the countryside is a stronghold of support for the Bolivarian revolution and it's very difficult to see how Guaido will get any support there.

The momentum for the coup against Maduro seems to have been lost. They were supposed to have a major challenge on the 23rd February around the question of delivering the so-called humanitarian aid and that failed. It is now nearly two full months since the beginning of this attempted coup and still there has been no defections from the army, which was one of the main planks of the plan of Washington to remove the Venezuelan government. And so there are now mutual recriminations between Guaido and his minders in Washington; the coup plans are in disarray.

READ MORE: Russia Will Continue to Expand Cooperation With Venezuela Despite US Pressure

Sputnik: According to an AFP report earlier this week Guaido is considering enabling a constitutional clause that would allow foreign military intervention in the event that the Venezuelan military was to remain loyal to Maduro. Do you think we could see this happen and see direct conflict take place between Venezuelan and US forces?

Jorge Martin: I think this is one example of the frustration and the desperation of the Venezuelan opposition. They have not been able to mobilize large numbers of people other than the demonstration on the 23rd January. The majority of the Venezuelan opposition supporters do not think that they can remove the government by mass mobilization on the streets, but rather they put all their hopes and expectations on military intervention by the United States.

© AFP 2020 / Yuri Cortez
Revolution? Guaido Calls for Venezuelans to Mobilize for ‘Operation Freedom’
But the problem is the United States is not very keen to intervene.

They have had bad experiences with previous foreign military imperialist adventures like Afghanistan and Iraq. It's proven to be been much more complicated for them to leave these countries once they've invaded them and they calculate quite rightly that invading Venezuela will not be an easy matter. Furthermore, they have tried to rope in other Latin American countries in this plan. But there is no real appetite in any other right-wing Latin American capitals for military action in Venezuela.

Russia Will Continue to Expand Cooperation With Venezuela Despite US Pressure