WASHINGTON (Sputnik) - US attempts to apply its regular playbook to topple the existing government and replace it with a pliant puppet regime failed to work in Syria, setting off instead eight years of endless civil strife that has killed hundreds of thousands so far, University of Ottawa Professor Kamal Dib told Sputnik.

Syria was able to defy the US policies to achieve regime change that destroyed such countries as Yugoslavia, Iraq, Libya and other nations since 1991, Dib said.

"The first edition of my book ‘Syria in History’ published in 2010 clearly explains that any attempt to repeat in Syria what had happened in other countries since 1991 (Yugoslavia, Iraq) would open for a prolonged conflict because Syria is different", Dib said.

US Strategy Defied by Syria

Syria was able to take a stand and find important friends in the immediate vicinity and elsewhere, Dib pointed out.

The Obama administration had followed the long-established US pattern of sending weapons, other resources and financial support to boost rebels groups to topple governments determined to maintain their independence from Washington, Dib recalled.

"Why [did] the US and various countries arm and train killing machines represented by takfiri organizations in Syria and Iraq?… There is an old tradition of arming rebels and militias in Asia, Latin, America and Africa to topple states which do not do what they are told, submissively", he said.

Independent Institute Center for Peace and Freedom Director Ivan Eland agreed that the US game plan to replace the Syrian government of President Bashar Assad with a regime of its own choosing had failed and only succeeded in fanning the flames of conflict in Syria.

© REUTERS / Khalil Ashawi
Russia Against Linking Political Motives With Syria Rebuilding Efforts - Moscow
"US involvement in Syria has undoubtedly aggravated and prolonged the bloody civil war and has only driven ISIS [Daesh] and other Islamic militants underground", he said.

The war in some parts of Syria would probably continue at a lower level and the Daesh might make a resurgence, Eland warned.

"The United States did help wipe out the [Daesh] caliphate, but the problem has not been solved", he said

President Donald Trump had hoped to end US involvement militarily in the conflict, but had been blocked by his military establishment, Eland observed.

"Trump wanted to withdraw all US forces, but has been hampered by the US security bureaucracies, who never want to stop any war", he said.

Dib observed that the successive stages of the war in Syria had resembled Hollywood war movies with each successive era seeing new and even more ferocious movements emerge.

"As in ‘The Lord of the Rings’ trilogy, where each episode introduces more ferocious and murderous armies (orcs, dragons). Syria witnessed a similar parade of hostile groups", he said.

At first, the United States supported civil opposition coalitions along with a Syrian Free Army in 2011, Dib recalled.

"When this did not work, they were replaced with more obvious Muslim extremists, mainly al-Nusra Front in 2012-2013; and since 2014, the atrocious Islamic State [Daesh] killers who cut heads and sell women in slave markets appeared on the scene", he said.

However, the entry of Russia into the conflict in support of the Syrian government in late 2015 changed things, Dib pointed out.

"The extent of the horrors committed in Syria by the armed gangs shows the power of ‘Shock and Awe’ that our Canadian writer Naomi Klein talks about (the use of overwhelming power and spectacular displays of force to paralyze the enemy's perception of the battlefield and destroy its will to fight)", Dib explained. 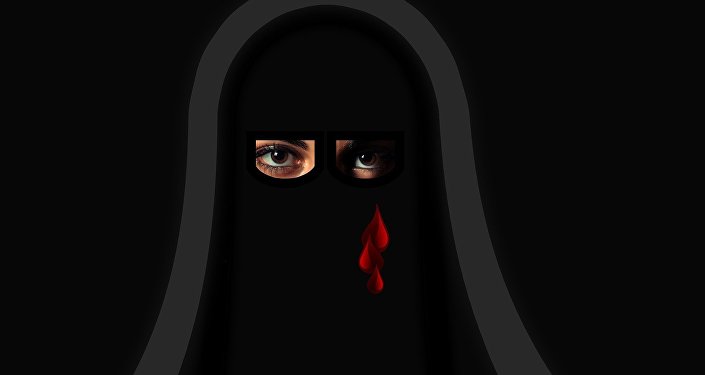 © CC0
WATCH Jihadi Brides Yell Daesh Slogans Amid Battle for Last Stronghold in Syria
The push to take over Syria and replace it with a conservative Arab regime or transform it into a confederation of religious/racial entities, did not change, regardless of who was the president of the United States, Dib observed.

"Since 2011, the on-going war on Syria is three-pronged: military, diplomatic, and media (including so-called soft-power instruments). The military aspect is only one part and I believe it is far from over", he cautioned.

Various armed groups continue to occupy vast swaths of Syrian territory, including the Idlib Province in the north, and parts of the north-east and the east, Dib commented.

"Military American and Turkish presence in those parts is strong and efficient. As things currently stand, it does not seem that the armed conflict is ending at any time soon, certainly not this year or next year", Dib said.

But even if the conflict ends in 2020 or 2021, the diplomatic and media and soft power campaigns will take several years to settle down and allow Syria to breathe again, Dib concluded.

*Daesh (IS/ISIS/Islamic State) is a terror group banned in Russia and many other countries.