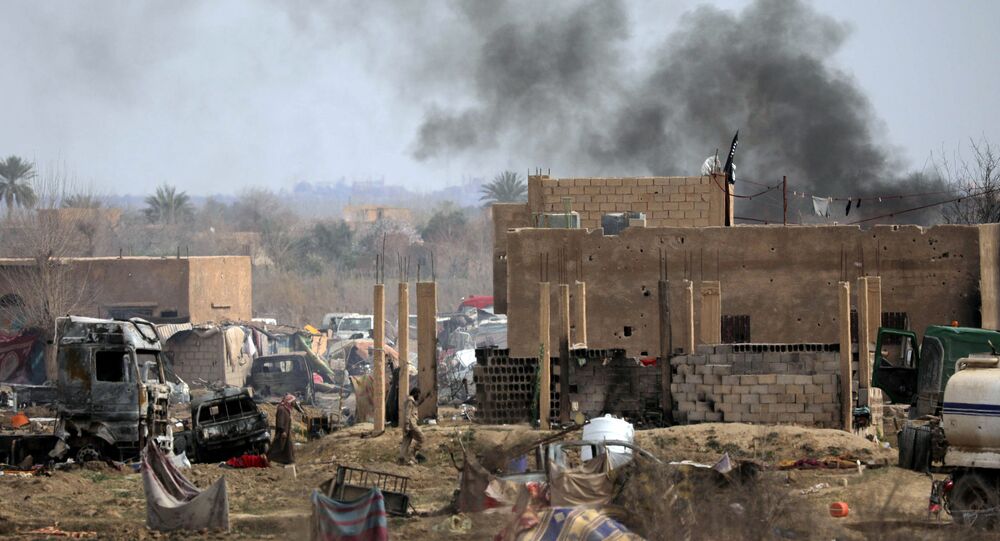 WASHINGTON (Sputnik) - The US military, the main defence contractors and virtually all members of the Senate and House of Representatives look set to support the unlimited continuation of the civil war in Syria, retired Defence Department analyst Karen Kwiatkowski told Sputnik.

"[President Donald] Trump may hope he can spend his way into a rational American security-oriented Pentagon, but the congressional-industrial-security complex will outlast him, and it is not interested in changing what has worked so well for the past 70 years", Kwiatkowski said on Friday.

"Trump is unable to rid himself of the Pence-Bolton-Pompeo triad that aims to increase US intervention around the world not decrease it", Kwiatkowski said.

The US armed forces remained strongly established within the territorial area of Syria, Kwiatkowski observed.

© REUTERS / Khalil Ashawi
Russia Against Linking Political Motives With Syria Rebuilding Efforts - Moscow
"The problem is that even without the train and equip pseudo-mission, the United States has encamped on and territorialized much of the western part of Syria, and unless the United States actually removes those bases and operations, the United States will still be in a position to play war in the sand", she said.

Historically, when a losing side of a conflict gains new or rejuvenated logistical or intelligence support, it extends the conflict, and increases the distance that all parties are from the peace table, Kwiatkowski explained.

Therefore, "It is pretty likely we will be reporting on the ninth and tenth anniversary" of the ongoing war, she predicted.

In theory, a stalemate or relative equality in the military power could bring the warring parties to the table, Kwiatkowski acknowledged.

"But it doesn't work that way. Only when both sides understand that their military solution is a waste of time — because one side is spending too much and one side is clearly losing — will peaceful coexistence be considered, because ceasing the fight can then be seen as a mutually beneficial solution", Kwiatkowski said.

"This is the wisdom of [former secretary of state and national security adviser] Henry Kissinger, not my own. It is exactly why he advocated the United States helping both sides in the Iran-Iraq war of the early 1980s… His ideas still resonate in [Washington] DC", she said.

It was immoral for the United States to provide arms to the numerous rebels in Syria who cut off heads or supplied foreign weapons to the Daesh terror group, Kwiatkowski emphasized.

"However, in the calculation of the strategic chess masters and chicken-hawks in DC who have never fought a physical battle or worn their country's uniform it seemed very reasonable in supporting their… agendas, not least of which is to… keep Arab countries unstable and in conflict", Kwiatkowski said.

Trump's instincts, matching those of the American people led him to believe that the "train and equip" program was a complete waste of money, and possibly counterproductive, Kwiatkowski noted.

© AP Photo / Syrian Civil Defense White Helmets
US Intends to Provide $5Mln to White Helmets, UN Mechanism in Syria - State Dept
Trump’s instincts here were not new, as he promised to end such activities and bring the troops home in 2016, Kwiatkowski recalled. "I imagine he was a bit shocked that his decision to stop Pentagon activity on the ground produced such rage among some of his advisers and in the Pentagon and the military-industrial owned media", she said.

If the United States and its armed forces leave Syria, the people who live in the region will rebuild their country, Kwiatkowski projected.

"This rebuilding is long overdue. The people of the region are ready for the next thing, which is less outside intervention, and more prosperity and peace", Kwiatkowski concluded.