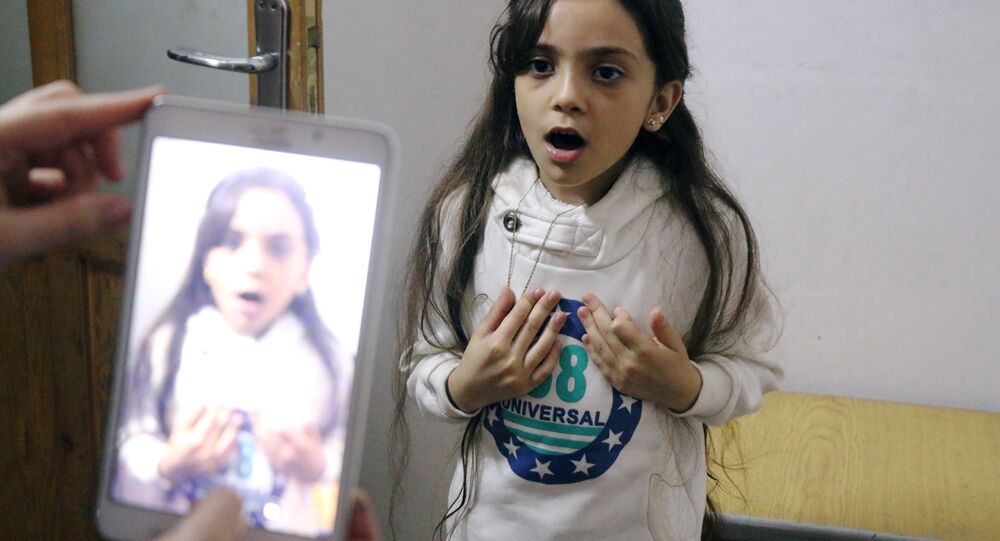 Friday marked the 8th anniversary of the 2011 Syrian protests which culminated in a brutal, foreign-backed war which claimed the lives up to 470,000 Syrians and forced millions more to flee their homes. On the somber occasion, Sputnik recalls the top five times dishonest reporting was used as a weapon to worsen the Syrian crisis.

Over the past several years, with Syrian troops liberating the vast majority of the country's population centers from an eclectic mix of jihadists, the Syrian conflict, or at least its active phase, seems to be nearing its an end. However, as recently as a year ago, while the Syrian Army continued its advance southward to clear the suburbs of Damascus and the regions of Daraa and Quneitra from the terrorists, Damascus's enemies, both foreign and domestic, continued to wage a very different kind of war, this one fought with video cameras, Twitter, and the patronage of major Western media outlets.

On April 7, 2018, the Western-funded White Helmets 'rescue group' released a video from the militant-controlled city of Douma, Eastern Ghouta, picturing a terrifying scene from a local hospital showing locals breathing through respirators and being doused with water to deal with the aftermath of what appeared to be a gas attack. The clip was aired by virtually every network television channel in the US and Europe, and prompted an outraged President Donald Trump to call Syrian President Bashar Assad an "animal" who would have "a big price to pay" for the carnage. A week later, the US, France and Britain launched a campaign of air and missile strikes against Syrian government targets.

However, a few weeks later, Russian media obtained verified testimony from multiple eyewitnesses who appeared in the video, including that of an 11-year-old boy who revealed that he and his mother were given food for participating in the clip. Unfortunately, later analysis showed that this eyewitness testimony debunking the chemical attack claim was broadly ignored by mainstream outlets.

In August 2016, a haunting image of a five-year-old boy covered in dust and blood seated in the back of an ambulance in Syria's Aleppo went viral, with major US TV networks, newspapers and social media reporting on the boy, who was said to have been injured in a 'brutal Russian airstrike' on a rebel-held neighbourhood. The story moved at least one CNN anchor to tears, and prompted veteran journalist Christiane Amanpour to confront Russian Foreign Minister Sergei Lavrov with the photo during an interview, saying that it illustrated a "crime against humanity."

However, sometime after the photo made its way out of the 24 hour news cycle, inquisitive investigators found out that the individual who took Omran's pictures had a habit of posing with terrorists, including the militants who posted for a video in which they beheaded a 12-year-old boy in Aleppo in July 2016. In 2017, nearly a year after the incident, Omran's father came forth, revealing to Russian media that the insurgents in militant-controlled Aleppo had shamelessly turned his son into a propaganda tool.

Bana Alabed: 'Child Exploitation for Use by Western Governments'

In 2016, as Syrian forces launched their operation to free the eastern portion of Aleppo from the terrorists, a 7-year-old girl named Bana Alabed shot to global fame with a series of tweets about life in a war-torn Syrian city from a child's perspective. Making Time's list of most influential people online in 2017 and lauded by the Washington Post as 'Aleppo's Anne Frank', the little girl's heartbreaking story of bravery and perseverance became a source of inspiration for Hollywood actors, politicians and media personalities worldwide.

My name is Bana, I'm 7 years old. I am talking to the world now live from East #Aleppo. This is my last moment to either live or die. — Bana

But unbeknownst to many of her followers, and according to testimony gleaned by investigative journalist Vanessa Beeley, who traveled to Bana's Aleppo neighbourhood in 2017, her father Ghassan Alabed was a Sharia court judge who was known for associating with both Nusra Front* and Daesh (ISIS)*. Bana's case, according to Beeley, was "complete child exploitation by our governments." Other journalists and sharp-eyed investigators have similarly called the established Bana narrative into question, pointing to her extremely limited understanding of the English language (which indicated that someone was helping her with her tweets, or writing them for her), and to some of her provocative language, including about it being "better to Start 3rd World War" than to let "Russia & Assad commit #HolocaustAleppo."

Irrefutable proof that Bana does not know any English. Not even the simplest possible English. What a scam! #Syria pic.twitter.com/ytOc9ieb4R

The #Oscars promoted CIA / MI6 Psyops Bana Alabed last night.
Bana is used & exploited to push the Neocon War in Syria for the terrorists & War Profiteers.
Her father is an al-Nusra (al-Qaeda) Jihadi terrorist from Aleppo, who now lives in Turkey. pic.twitter.com/xkbxHC1LRl

Shortly after the Russian military campaign in Syria began, many Western media outlets began accusing the Russian air force and its Syrian allies of indiscriminately bombing schools, hospitals and other forms of civilian infrastructure in militant-held areas using cluster bombs, barrels bombs and all other manner of non-precision weaponry.

Citing information provided by the above-mentioned White Helmets, as well as the so-called Syrian Observatory for Human Rights, a Coventry, UK-based resource operated by one man, Western media parroted the claims, notwithstanding multiple Russian and independent media investigations indicating that the damage was often caused in militant-government fighting and then presented as damage done by Syrian or Russian airstrikes. Again and again, The Russian military was forced to respond to the claims, each time slamming the media's use of unverified anonymous sources, while disclosing strategic details about its operations, notwithstanding the risk of this information being used by militants to plan their operations.

In one particularly brazen incident in 2016, after then US State Department spokesman John Kirby again alleged that Russian air power had destroyed a whopping five hospitals in Aleppo, the late Russian Ambassador to the UN Vitaly Churkin shut down the empty claim by pointing out that Russian air power had not launched airstrikes in Aleppo for over a month beforehand.

Daraa 2011: Dishonest Reporting That Started a War and Destroyed a Country

In mid-March 2011, following weeks of reporting in Western and Arab-language media that Syrian security forces had arrested and tortured a group of teens accused of painting anti-government graffiti in the southern Syrian city of Daraa, Syria was overrun with protests, with tens of thousands of Syrians taking to the streets, chanting revolutionary slogans and calling for an end to the "Assad regime."

Amid (mostly accurate) reports that Syrian security forces were cracking down on the protests using tear gas, water cannons, and live ammunition, what wasn't mentioned, apart from a few rogue reports, was that police officers and troops, often armed only with batons and riot shields, were also being killed, including by sniper fire.

In total, during the so-called 'civil uprising' stage of the war in Syria between mid-March and mid-August, 2011, over 400 police officers and soldiers were killed among the estimated total of 2,200 deaths, with protesters attacking police stations, seizing weapons, and taking over administration buildings while terrorists backed by foreign donors began flooding into the country. Still, in all the reporting on the latest anniversary of the conflict, few outlets have dared to mention that the 2011 protests which ultimately culminated in the bloody Syrian war were not as simple as a case of another Arab country's residents rising up against a cruel dictator.