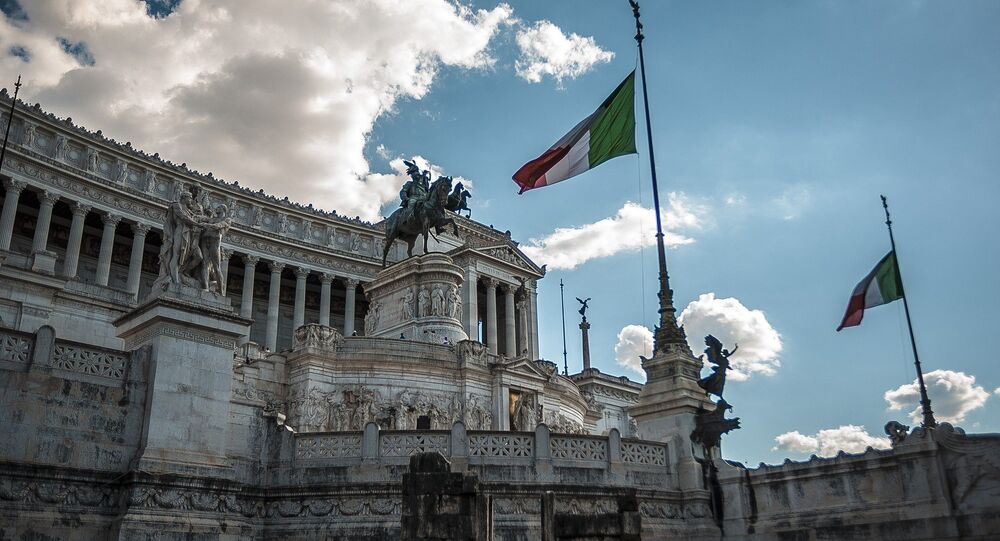 The fact that China is investing in Italy, buying entire companies and that Italy is increasingly open to cooperation with the Asian giant, primarily on the Belt and Road Initiative, is worrying the United States, which isn’t hesitating to put pressure on Rome.

Italian-Chinese economic relations are continuing to develop. In recent days, Costa Venezia, which is the first Italian ship created specifically for the Chinese market, has been launched.

Italy is ready to sign a memorandum to join the Silk Road and Chinese President Xi Jinping’s next visit to the country, scheduled for late March, could mark a turning point in relations between the two countries. However, the United States isn’t happy about this; they consider the Belt and Road Initiative to be a threat to American world hegemony.

© AP Photo / Jeff Roberson, File
Steel Imports From China, Italy Hurt US Economy - US Trade Commission
Sputnik spoke with Renzo Cavalieri, a professor of Chinese law at the Ca’ Foscari University of Venice, to find out what Italy can gain from joining such a grand project.

Sputnik: How can Italy benefit from its economic cooperation with China?

Renzo Cavalieri: Economic relations mean many things: first of all, in the strict sense, economic relations mean to sell and buy. For Italy, China is a major trading partner and an outlet market for a whole series of products, not just those related to fashion and design, but also those in the fields of engineering and technology. China is also an important market where many Italian companies can purchase goods.

Then there’re some other economic relations between the two countries, such as reciprocal investments. Italian companies investing in China have an interest in participating in the economic growth of the Asian country. For Chinese companies, our country is a strategic outlet that has access to some other European markets.

Sputnik: We know that the Chinese invest a lot in Italy, but there are risks and dangers to it. What do you think about this?

Renzo Cavalieri: The positive aspect of Chinese investments in Italy is that they are long-term investments; that is, a Chinese investor is not trying to acquire new technologies to be able to take home, but is investing in Italy for a long-term presence in Europe.

© AP Photo / Thomas Peter/Pool
Italy Seeks Joining China's Belt and Road Initiative as US Warns of 'Harm to Rome's Reputation' – Report
The main problem of Chinese investments is integration after the acquisition: China is a very different country from Italy, and Chinese managers are very different; and moreover, some of them know little about Italian the language and culture. But if you call China’s “purchase” of companies a risk, I don’t see any risk there.

Renzo Cavalieri: Italy is an open country with an open market, and this is its advantage. So investors, as long as they respect the rules and don’t run counter to the interests of the Italian government, don’t pose any risk to the country’s economy.

But it’s a different story when we speak of very specific industries. Let’s say the country’s strategic interests, which can be military, energy, communications and so on: in this case, I believe it is not necessary to ban the investment, but there should be some minimal level that cannot be exceeded. This concerns not only Chinese investments, but any other investment as well.

Sputnik: Is there any risk that by buying Italian companies and signing important contracts with Italy, China can appropriate Italian know-how?

Renzo Cavalieri: It’s not a risk, it’s a certainty! Once China buys an Italian company that has certain technologies, these technologies are acquired by the Chinese. It’s necessary to understand that such a development is not absolutely negative; maybe this way some Italian entrepreneur will be able to collect money and develop new technology.

© AP Photo / Thomas Peter/Pool
US National Security Official Urges Italy Not to Support China’s ‘Belt and Road’
The problem is that, from a technological perspective, China is now a technologically competitive country for Italy. Of course, we should manage the economy in general. In my opinion, the issue of China obtaining a particular Italian technology or certain know-how is not really a problem.

Sputnik: Why, in your opinion, is the United States against Italy’s participation in the Belt and Road project?

Renzo Cavalieri: There is undoubtedly a competition between the United States and China with regard to zones of influence. The United States is afraid that Italy is the weakest link in the European system and in particular the G7. The Americans are concerned that Italy could become a Chinese Trojan horse allowing them to enter the system.

I believe that Italy could benefit from that. Italy is already part of the Belt and Road Initiative, for example the Silk Road Fund, which is set up specifically for investments along the New Silk Road, is already investing in Italy. It’s also true that the stronger the ties with China are, then the stronger is the need for China to follow global rules.

Chinese companies, banks, and the government all operate in a unitary way; while in Italy there is separation of powers where some very small companies often have no contact with the government. This is what could be dangerous for Italy, because we are talking here about a very large and unified system against a small and divided one. So, obviously, there are risks here.

Sputnik: What role could Italy play in the Belt and Road Project?

© East News / Imaginechina
Analyst on Huawei Case: US Seems to Realize that China is Getting Ahead of Game
Renzo Cavalieri: Italy can now play a dual role. On the one hand, it can appear as a founding country of the European Union with certain traditions and values; but on the other hand, it can show that it is open to a new world that is more multipolar, and where China plays a fundamental role.

The danger is that Europe doesn’t have a unified attitude on these issues. Having joined in this project, Italy would be able to move in the right direction — but on its own, that is, without its allies, namely France and Germany, which aren’t ready for such steps. But the fact that Italy is open for cooperation with such countries, like China, is, certainly, a positive thing.

Views and opinions expressed in this article are those of Renzo Cavalieri and do not necessarily reflect those of Sputnik.