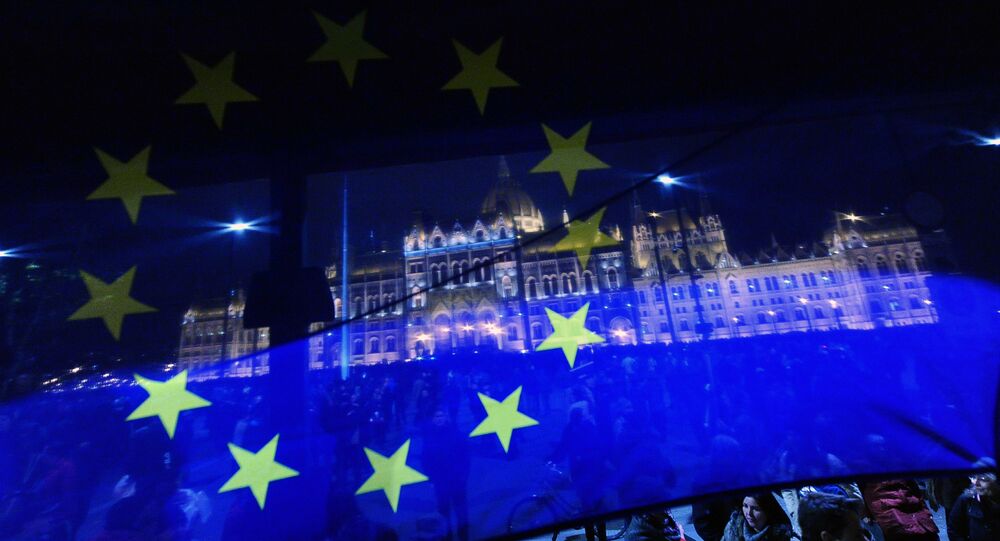 According to a recent poll released by the German newspaper Bild, right-wing parties are slated to double the number of their seats in the European Parliament elections this May.

Sputnik has discussed this with Dr Chris Reynolds, Associate Professor in Contemporary French and European Studies at Nottingham Trent University.

Sputnik: How much do the results of the poll reflect the real state of affairs here? Is it, indeed, likely that we're going to see the greater number of seats in the EU Parliament now occupied by right-wing parties? What are your thoughts?

Dr Chris Reynolds: It doesn't really come as that much of a surprise to me that the polls are showing that these sort of right-wing parties are ahead and are likely to gain quite a lot of seats in the European Parliament. It's kind of been in the air for some time; and everyone needs to take into consideration the nature of European elections which are often used within the national framework as a means [by] which the population can almost punish the political elite.

© AP Photo / Virginia Mayo
Puigdemont to Run for Seat in EU Parliament - Junts per Catalunya Party
If we look back at the last European elections in 2014 in France, Marine Le Pen's Front National was at the top of the polls; so, given what happened since then when you think of it, with the problems that Europe has experienced in the last five years, it's not exactly been clean sailing for the European project, the European Union. And as a result, I wouldn't be surprised if people do sort of return MPs who are going to, perhaps, cause problems with the European project, it's almost inevitable I would have thought.

Sputnik: Why is the right-wing representation predicted to grow? What prompts the popularity of those parties? I mean, we've seen a lot of populism obviously advance itself since President Trump and the Brexit vote; but what's the basic understanding now as a phenomenon?

© AFP 2021 / THIERRY CHARLIER
Analysts Explain Why Orban Should Not Be Expelled From European People's Party
Dr Chris Reynolds: I think it's part of this, as you've already pointed out; if we think of Brexit and if we think f Trump and the rise of what are described as populist polls elsewhere in Europe, it's very much a result of a disaffection with the political elite all around Europe and around the world where people are kind of still coming to terms with the consequences of the economic crisis and a whole range of problems that have come along.

READ MORE: ‘It's a Failed Structure' — Political Commentator Calls for a Shake-Up of the EU

© AP Photo / Jens Meyer
‘Migrants in AfD Are Becoming More and More Visible' - AfD Member
And the problems that have resulted, such as Brexit, for example, have only served to further frustrate people; because the one thing that the Brexit debacle has damaged is the incompetence of the political elite to come up with some sort of solution to the process. So, for the British perspective, we've talked of little else over the last two years except for Brexit. So, I'm not surprised that people are frustrated with the political elite and they are looking for alternatives; and as a result of the failure of the political elite to deal with the issues that we're faced with, be it the economic crisis and its consequences, the migration crisis or Brexit.

These crises almost inevitably lead to the rise of nationalism as people have an almost inward turn and start to think of their own turf before thinking of the others. It's no surprise to me that nationalist right-wing parties are taking advantage of this; this won't be the first time in history that this has happened.

Sputnik: We've got Annegret Kramp-Karrenbauer, the leader of the German CDU party, now saying that she's rejected the idea of European centralism promoted by Emmanuel Macron. What implication could the difference of opinion between these two major EU countries have on the bloc's politics and strategy moving forward from your point of view?

Dr Chris Reynolds: I think that's fascinating. The letter that Macron put out tried to interpret what's going on there. That in itself is quite interesting and it's clearly an attempt by Macron ahead of European elections to kind of try and remind people of the positives of the European project.

© REUTERS / Charles Platiau
Belgian PM, EU Council Chief Support Macron's Call for 'European Renaissance'
The response from his German colleague to say to kind of show a hesitation towards what Macron is suggesting, is also very interesting and perhaps worrying as well; because it is true when we look at the history of the European project, the importance of the Franco-German axis in being the engine room for the development of the project, helping the European project through crises that every time Europe has got over a crisis or taken a step forward it's more often than not been as a result of a strong partnership between the French and the Germans. There are examples of when the Franco-German axis didn't work very well, particularly during Jacques Chirac's term.

And when the Franco-German axis, the engine room, breaks down, the European project seems to stagnate and certainly has some difficulties. So, seeing, the potential for strong tension between the French and the Germans over Macron's call for a renaissance of the European project is not something that fills me with optimism; but it is interesting to think about what Macron is potentially doing with that letter.

It's clear that Germany is — you know, Merkel's coming to the end of her term and Europe is going to be requiring some new leadership; and ever since Macron became the French president, it's clear that he has been trying to position France in such a way that France can reassert itself as the leader of the European project, and he certainly — as is evidenced with this letter — sees himself as maybe assuming the role that Merkel had assumed beforehand. So, it's interesting times in terms of the leadership of the European project and the relations between France and Germany.

The views expressed in this article are solely those of Dr Chris Reynolds and do not necessarily reflect the official position of Sputnik.