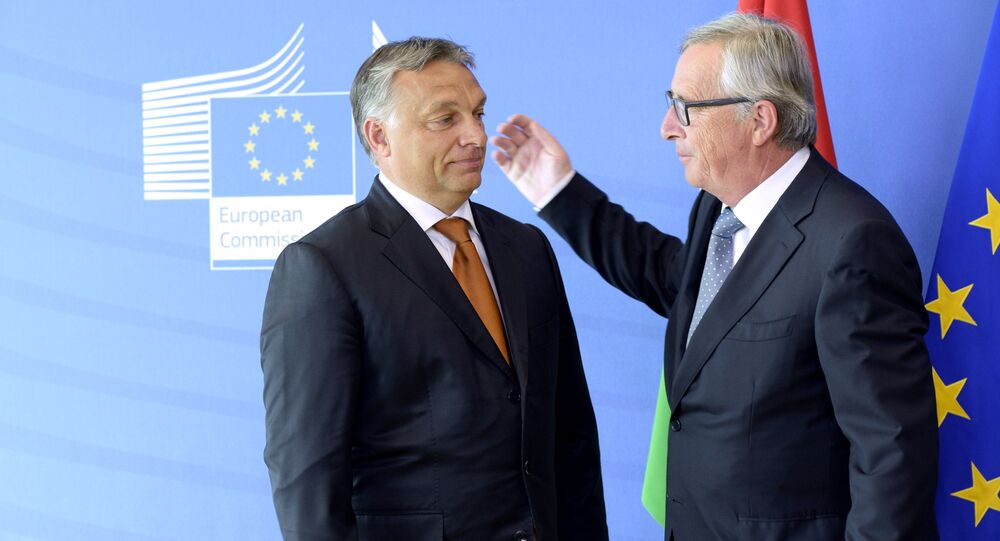 Earlier this week, MEP Manfred Weber told the Bild newspaper that Hungarian Prime Minister Viktor Orban must stop his anti-EU rhetoric if he wants his Fidesz Party to remain in the conservative European People's Party (EPP).

“The dispute between Hungary’s Prime Minister Viktor Orban and the EU is in fact a struggle between the old EU countries (Western Europe) and the new ones (Middle and Eastern Europe)”, Frank Creyelman, honorary Belgian MP and former chairman to the Committee on Foreign Policy, European Affairs and International Cooperation, told Sputnik.

He claimed that one of the main stumbling blocks in Brussels is “the most symbolic issue” of mass immigration, in which “Orban took a leading and even provocative role”.

“As such Orban became leader of Middle and Eastern European EU countries and a symbol of the struggle of all European against mass immigration from Muslim countries and Africa. In the refugee crisis he stood up against [German Chancellor] Angela Merkel. Now he is paying the price for that," Creyelman noted.

He suggested that “the open war between Orban and ‘his’ political group in the European Parliament” will affect elections both in Hungary and beyond, with Orban expected to be seen as a “martyr”.

UK-based political commentator Alan Bailey, for his part, referred to what he described as Orban’s “cultural resistance” to the EU when it comes to the immigration issue.

“It also includes a dislike of seeing Hungary’s population turned into a low income herd of ‘Amazon Box packers’ (to use a generalist example). As Orban’s [Fidesz] party are right leaning, he is also concerned about internal tensions that can be created by sudden influxes of peoples with differing cultures," Bailey told Sputnik.

When asked how justified EU politicians’ calls to exclude Fidesz from the European People's Party (EPP) are, Bailey claimed that the EU “has no right” to do so because “it [Fidesz] is only following the policies it promoted and won elections with”.

“Democracy plain and simple. Whatever I may agree or disagree with Fidesz, I do believe in national sovereignty, and the Hungarians I know are broadly in favour of these policies too. The EPP can only function as an open discussion forum for all elected officials from all sides of the political spectrum. Shutting out a country over non-conformism is a blind alley that can only lead downwards," the US expert concluded.

Weber added that Orban should also apologise to other EPP member parties and ensure the permanence of George Soros-baked Central European University’s headquarters in Budapest.

Earlier, the EU Observer reported that Christian Democrat parties voiced their opposition to the EPP membership of Hungary's governing party Fidesz, which is known for its tough stance against immigration.

Hungarian Prime Minister Orban, for his part, warned that the breakup of the European Union was not excluded if one part forces pro-immigration policies on the other.